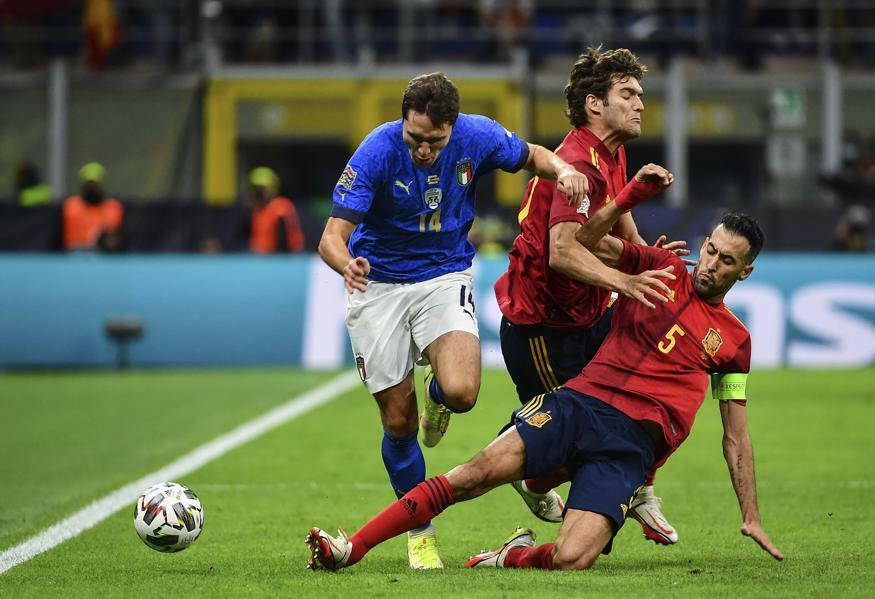 It had to end some time.

Italy’s 37 game unbeaten run, which started with a 1-1 draw against Ukraine in October 2018 and included 28 wins, ended at San Siro against Spain in a pulsating affair.

There can be little argument that Luis Enrique’s side deserved to win and advance to the final of the UEFA Nations League. Spain were much the better team for the majority of the match, with Italy sporadically flickering into life through the brilliance of Federico Chiesa.

Although they did have their chances: Federico Bernardeschi hit the post with a smart shot, and Lorenzo Insigne somehow missed when it was easier to score. Chiesa also hit the post late in the game, before his relentless pressing from a Spain corner forced them to concede possession, and the Juventus forward ran the entire length of the Spain half untouched, and teed up Lorenzo Pellegrini for a tap-in to give Italy some hope.

“Better to have lost tonight than at the Euros,” recognised Azzurri boss Roberto Mancini after the game.

Mancini won’t be too heartbroken over the loss. The Euro 2020 semi final could’ve gone either way, as could last night’s game. Barring the final of Euro 2012, games between the two southern European heavyweights are generally tight encounters.

As the Qatar World Cup looms on the horizon, Mancini can look at his squad and see that the future is bright; bar Leonardo Bonucci and Giorgio Chiellini, the old grizzled veterans of the team, most are at the beginning of a cycle with their nazionale, which wasn’t the case for the 2006 squad that triumphed in Germany.

There’s an abundance of talent in defence and midfield, and more players who could feasibly break into the senior team by the time the World Cup starts, like Milan’s Sandro Tonali.

But what was evident in the defeat, and what has been clear for some time, is that Mancini is desperately short of a genuine centre forward.

Ciro Immobile and Andrea Belotti have been Mancini’s go-to strikers throughout his stint with Italy, but neither have impressed to any great extent. Immobile is a shadow of the player he is in the light blue shirt of Lazio when he pulls on the darker shade of the same colour; Belotti, even at club level with Torino, has never kicked on from his breakthrough season in 2016-17, when he scored 26 league goals in 35 games.

He’s glimmered for Italy in patches, just like Immobile, but this tends to come during qualifying games against the likes of Lithuania, Greece, Bosnia and Herzegovina and Armenia, and not in high-calibre contests.

Immobile got the nod for most of the Euro-winning campaign, starting six of the seven games, and scored twice in the group stage. As Italy progressed, Immobile’s confidence dipped and, admirably, he transformed himself into a willing runner for the side, the Stephane Guivarc'h of Italy, doing the dirty work and creating space for the likes of Chiesa, Insigne and Nicolo Barella to exploit.

It could be argued that Italy won the competition in spite of its sterile strikers. But to swing back to the France comparison, come Euro 2000, Thierry Henry and David Trezeguet were ready to step into the void, and they were a much better side than the ’98 team.

Mancini won’t be as lucky as Roger Lemerre.

There’s a dearth of Italian strikers. Cast your mind back to the late 1990s and early 2000s, when Italian coaches Dino Zoff and Giovanni Trapattoni could call up Bobo Vieri, Pippo Inzaghi, Vincenzo Montella and Enrico Chiesa. There was such a depth of talent that strikers like Beppe Signori, Marco Di Vaio and Dario Hubner, scorer of some 24 goals with little Piacenza in 2001/02, were completely ignored for tournaments.

Surveying the landscape, you have to wonder where the next great Italian striker (or il bomber, as they are known) will come from between now and the end of 2022.

Moise Kean is yet to unlock his potential, but it’s worth remembering that Kean is still only 21; there’s hope that Giacomo Raspadori could blossom within the next year at Sassuolo; likewise for teammate Gianluca Scamacca.

Beyond that, options are very thin on the ground. Mancini utilised Bernardeschi as a false nine against Spain, and with Immobile and Belotti continuing to struggle at international level, the false nine may be Mancini’s only option going forward.

This will be Mancini’s biggest concern as we race towards Qatar, not the end of the unbeaten streak.