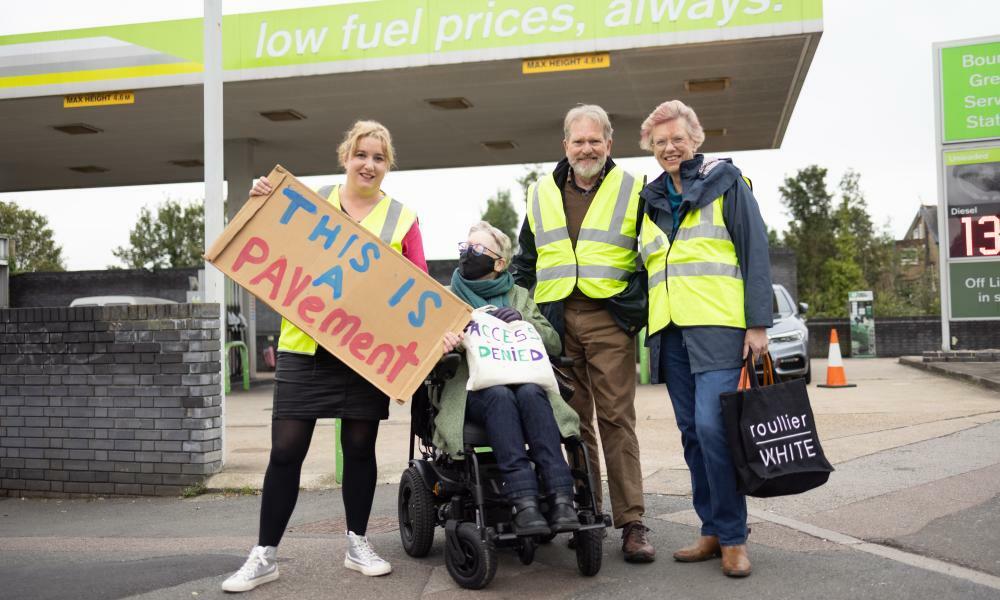 Bounds Green primary school sits on a road so busy it has a bridge for a pedestrian crossing. Even on a good day the air is acrid, suffused by mephitic fumes belched continuously by traffic on the A109, which bisects this north London neighbourhood.

But over recent weeks, with the fuel crisis turning the nearby petrol station into a magnet for drivers scouring the city for fuel, good days have been seldom.

The A109 outside school turned from busy to gridlock as drivers from miles around queued in both directions to reach the Applegreen service station, nearly exactly opposite.

School-run mothers and fathers and other local people begged their councillors for help, and got nowhere. So they decided to take matters into their own hands, first protesting and then banding together into vigilante traffic patrols.

“For 10 days, we were a town terrorised by traffic; we felt like we were in a war,” Carla Francome, 43, a TV producer whose four-year-old and six-year-old attend Bounds Green school, told the Guardian. “We could hear beeping from our houses, and we couldn’t breathe on the streets and in kids’ playgrounds. People of all ages couldn’t travel safely on crossings or along the pavements.”

Bounds Green’s traffic crisis began the Saturday before last, as the wider petrol crisis began to grip the country. That day, Francome spent 20 minutes walking the length of a queue of traffic that stretched back all the way to the north circular. “I thought I was going to be sick,” she said. “I was retching: the stink was disgusting.”

The following Monday, when Francome and other parents tried to walk their school runs, the impact on the community became clear. The road was clogged with traffic. One parent couldn’t even get across the pelican crossing from the petrol station side to the school side because of lorries stretched across it.

Even on the pavement, children walking with their parents were unable to safely pass. Some squeezed between cars queuing almost bumper-to-bumper at the petrol station entrance, taking in lungfuls of poisonous exhaust fumes along the way.

“It was a war – it was pedestrians and cyclists versus people in cars,” Francome said. “It was heated, dangerous, there was swearing, nearly fights, crashes. And for many of us, things will never be quite the same again. I felt like I’d been radicalised against the motor vehicle.”

Following failed attempts to get an official response, Francome and her neighbour, Salli Booth, 66, walked out with a handmade sign saying “This is a pavement” and staged a protest. “For me I’m very near the exhaust of any vehicle,” said Booth, who uses a wheelchair. “Same for anybody who’s short, like a child. So it’s pretty putrid.”

“It’s the fact that cars win, because you are scared of them,” Francome said. “When I’m with the kids, I’m constantly [saying]: ‘Come here; don’t go there.’ You are terrified because if a driver takes their foot off the clutch, you’re dead. Cars have complete dominance.”

A fellow parent, Fiona Dear, 41, who is also head of campaigns at the Climate Coalition, added: “What really upset me was if you asked any of the drivers to move, they were swearing [back] – in front of kids. I couldn’t get past with a buggy and I asked a driver to move and he swore at me, in front of lots of kids.”

Days later they stepped up their response, borrowing a handful of hi-vis vests and enlisting a group of 10 local residents to stage traffic patrols, imploring drivers to keep the pavements clear and to switch off their engines while idling.

As well as bringing the community together, the experience has also made many question their over-reliance on cars. “This whole story has really brought to the forefront how our dependence on cars and driving has a lot of negative consequences; and how, where possible, it might be better for all of us if we try and find other modes of transport,” Francome said.