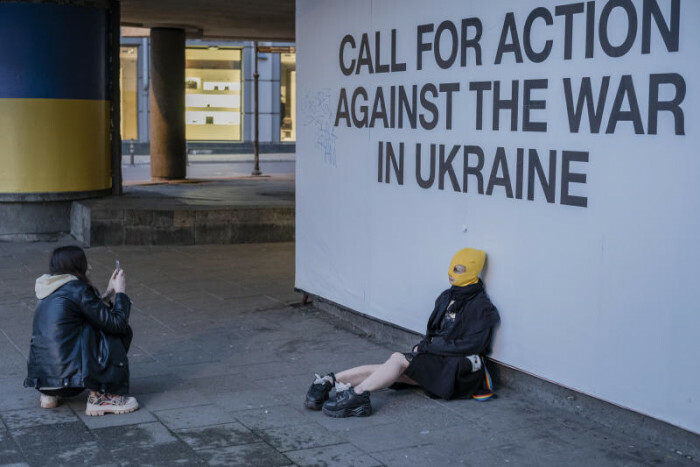 Maria Alyokhina was facing a sentence in a penal colony under harsh laws banning criticism of warmongering President Vladimir Putin,…

Russia, not Ukraine, needs de-Nazification, the leader of anti-Kremlin punk band Pussy Riot, who left Russia this week by disguising…

She described it as a ‘big kiss-off’ to Russian authorities

The Independent UK
One subscription that gives you access to news from hundreds of sites
War in Ukraine: Latest developments

France 24
Get all your news in one place
Latest World news:

Curtains For COVID: Miniature Air Curtain ‘Helps Stop Spread Of Covid-19 In Hospitals’
A miniature air ‘curtain’ to help stop the spread of Covid in hospitals and other health settings where social distancing…

Asharq Al-Awsat
On the front lines in Donbas: One Ukrainian soldier's story

They are also two to three times more likely to die as a result of pregnancy than white women, according…

The Guardian - US
From analysis to good news, read the world’s best news in one place
Boris Johnson Isn’t the Only One to Blame for Northern Ireland

‘It was foolproof’: Pussy Riot activist tells of courier-suit escape from Russia

Hours after Vladimir Putin’s forces invaded Ukraine on 24 February, Lucy Shtein, a member of the daring art collective Pussy Riot, knew it was time to get out of Russia.

But Shtein, 25, had been under house arrest for more than a year, with police officers patrolling the street outside her small flat in central Moscow.

“I realised I could no longer stay in Russia. So I started plotting my escape, which wasn’t going to be easy,” Shtein said in an interview with the Guardian.

As a longtime Kremlin critic and political activist, Shtein has an extensive history of run-ins with the authorities, which have forced her to think outside the box. “I have worn different disguises before to dodge the police. Sometimes I would wear long coats, I even dressed as a construction worker once.”

So she was well prepared to cook up a new kind of camouflage. On a recent spring day she put on a bright green suit from a food delivery company, which she had ordered online, and slipped out into the streets unnoticed.

“It was really convenient that delivery couriers have such big bags. I even managed to put my beloved Mr Rat in the bag,” Shtein laughed, referring to her pet rat who has become a prominent character on her social media accounts. “We have become so used to delivery couriers roaming Moscow, so it was a foolproof way to escape.”

After leaving her flat, she took a series of pre-planned car trips, eventually crossing the border into Lithuania.

Six months before the war, Shtein had been sentenced to a year of so-called “restricted freedom” for promoting a protest that called for the release of the jailed opposition leader Alexei Navalny, who is serving a nine-year sentence in a maximum-security penal colony. She was allowed to leave her flat only at certain times, and had to wear an electronic ankle tag 24 hours a day.

While the authorities have frequently targeted Shtein and her fellow Pussy Riot activists since the group first came to their attention in the early 2010s, the invasion of Ukraine has brought a new, more vicious crackdown on any anti-war dissent.

In an ominous speech a month after the war started, Putin announced a hunt for “national traitors” and a “fifth column” that he claimed was attempting to undermine the invasion.

Taking cues from Putin’s speech, pro-Kremlin activists plastered Shtein’s door with pictures that labelled her a traitor who had “sold out the country”.

Shtein, who was also a local deputy in Moscow, said she was initially committed to staying in Russia “as long as she could”. But before long she realised that the new climate of threats and intimidation had destroyed any chance of her living a normal life.

“For a long time I aspired to change things from within the country, but the war simply made that impossible,” she said. “If I wouldn’t be able to continue any of my work in Russia, it didn’t make any sense for me to stay, just sitting around doing nothing.”

With her escape, Shtein joined the tens of thousands of Russians who have fled the country since February and moved to cities across Europe.

Pussy Riot first came to prominence in 2012 when five of its members staged a provocative protest in Moscow’s Christ the Saviour Cathedral against Putin and the Kremlin’s close relationship with the Orthodox church. Three of the participants on that day were sentenced to two years in prison, which they spent in a colony far from Moscow. “I think that protest really led to a personal vendetta from the authorities against us,” Shtein said.

In many ways Pussy Riot’s protest foreshadowed the growing role the church has come to play in Putin’s third and fourth presidential terms, with the church’s leader, Patriarch Kirill, now one of the main backers of the Ukraine invasion.

Shtein’s escape took place just over a month ago, on 31 March, but only now is she able to speak openly about it. She said she had to keep the move a secret because her girlfriend and fellow Pussy Riot activist, Masha Alyokhina, was still in Russia facing criminal charges – and plotting her own getaway.

Earlier this month Alyokhina, wearing the same type of food courier outfit, which Shtein had left for her, also fled the country, describing her dramatic attempt to the New York Times. The couple have since been reunited.

“It felt liberating to finally take off that electronic ankle tag,” Shtein said, adding that it would take time before she adjusts to her newfound freedoms in Europe. “Out of reflex, I still put on my socks as if the tag is there. And I still get shaken when I hear someone knocking on my door.”

Together with other Pussy Riot activists who have left the country, Shtein and Alyokhina have now embarked on a series of performances across Europe to raise funds for Ukrainian refugees. “I will continue my work from outside of the country. I want to be useful in one way or another,” she said.

Maria Alyokhina was facing a sentence in a penal colony under harsh laws banning criticism of warmongering President Vladimir Putin,…

Russia, not Ukraine, needs de-Nazification, the leader of anti-Kremlin punk band Pussy Riot, who left Russia this week by disguising…

She described it as a ‘big kiss-off’ to Russian authorities

The Independent UK
One subscription that gives you access to news from hundreds of sites
War in Ukraine: Latest developments