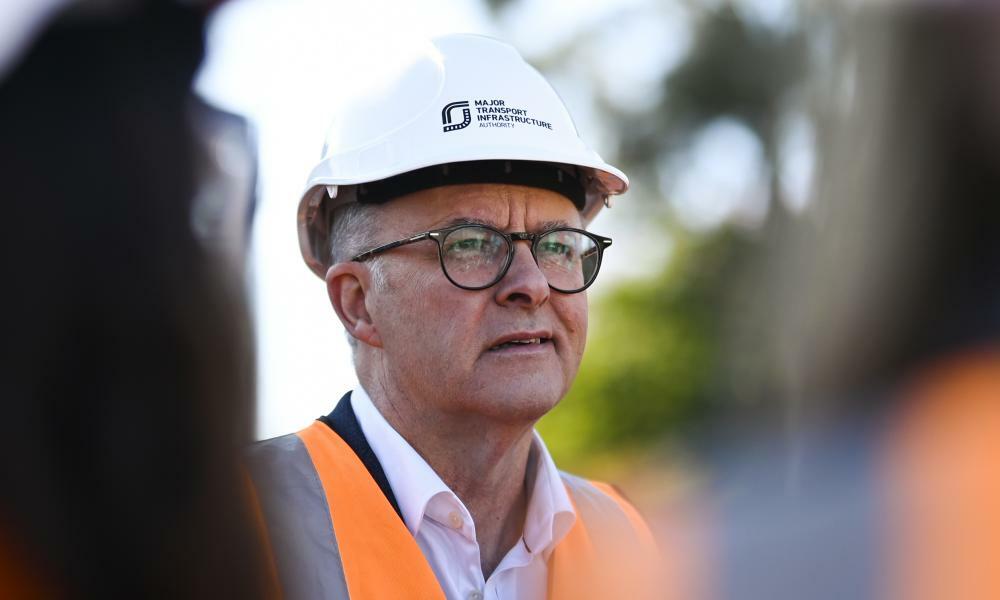 In an unusual move, Opposition Leader Anthony Albanese endorses a 5.1 per cent increase to the minimum wage as inflation…

The Prime Minister says Anthony Albanese's push for wages to keep pace with inflation is "reckless", but Labor says the…

Government claims Labor leader is improperly interfering with independent process, but it wouldn’t be the first time a precise number…

The Guardian - AU
One subscription that gives you access to news from hundreds of sites
Anthony Albanese narrows scope of pledge to support 5.1% pay rise to match inflation

On Tuesday, Anthony Albanese committed a major gaffe of the election campaign when he told reporters he believed the minimum wage should rise to keep pace with inflation.

This horrendous error will surely be the … wait … what???

It is a true sign of just how so many political and economics journalists are captured by business lobby groups that this is even a story.

Albanese, when asked if his belief that workers on the minimum wage should not go backwards meant that he supported “a wage hike of at least 5.1% to keep up with inflation”, responded by saying: “Absolutely.”

Is this a shock?

Do you think the real wages of the lowest paid in Australia should go backwards?

Do you believe that the solution to rising inflation is that the standard of living of the poorest workers in the country should decline?

Because that is what Albanese would have been advocating were he to have disagreed with the question.

But you see, this is the issue with wages growth. Journalists these past weeks have been asking Albanese how he would get wages to rise – one journalist absurdly wanted him to guarantee he would raise wages.

And yet as soon as he does the bare minimum thing of advocating for the minimum wage to rise in line with inflation, journalists flee to the business groups seeking a quote and start shouting about a return to the 1970s.

The reaction was as you would expect – the AFR ran “Employers warn Labor’s 5pc pay rise will crush business”, and Scott Morrison was reported as quickly siding with business groups, saying that Albanese’s “thoughtlessness on this would actually make inflation worse”.

Seriously. Aren’t journalists meant to have some critical capacity?

Every year in May, business groups warn wage rises need to be restrained, because every year in May the Fair Work Commission is deciding the next minimum wage increase.

And every year business groups advocate a rise lower than inflation. This is not news.

But wages should rise faster than inflation, because we want living standards to rise as well.

And wages rising faster than inflation is not inflationary.

I know I have said this before, but it bears repeating – if wages grow in line with increases in inflation and productivity, they are not inflationary.

Don’t take my word for it – listen to the man appointed by Scott Morrison as the head of the Department of the Treasury. Steven Kennedy said the same in February when testifying before the Senate economics estimates committee: “If we can achieve productivity growth of 1.5%, then [assuming 2.5% inflation] nominal wages can grow at 4% and put no pressure on inflation.”

Or to make it even easier: real-wages growth = productivity growth.

So how have we been doing on this score?

No one is suggesting this equation must hold every month – because productivity and inflation can get erratic. So let’s look at a rolling three year-average to remove the noise:

Aside from a period during the GFC and just before the pandemic when productivity hit pitiful lows, real wages have consistently grown by less than productivity.

As I noted in my work for the Centre for Future Work thinktank, from June 2019 to the end of last year inflation grew 5.7% and productivity has grown by 4.5%.

Back in 2013 then ACTU economist Matt Cowgill constructed another measure of labour earnings using the compensation of employees in the GDP figures and the hours worked by employees in the labour force figures.

He found that in the 1970s real wages had outpaced productivity, but since the turn of this century? Nope:

Now, I hear you saying that’s all well and good, but what about minimum wages?

Won’t a 5.1% increase push up inflation given the current inflation rise is supposed to be temporary? Won’t that lock in more inflation?

Currently the Reserve Bank of Australia is predicting inflation growing by 5.9% in the 12 months to December and then down to 4.3% by June next year. That means a 5.1% increase would have seen inflation growing faster than or equal to the minimum wage for two years:

And here’s the thing about the minimum wages – yes, they get a boost in July, but they then decline in real terms because prices don’t just rise once a year.

This happens every year, and so the annual increases are a chance to make up for this decline.

But because inflation has grown by so much in the past year, even a 5.1% increase won’t make up for the rise in prices.

What about business groups’ suggestions?

Well, the Australian Industry Group in its infinite generosity has increased its initial proposal of a 2% increase to 2.5%. And yet given the predictions of inflation over the next year that would take the real value of the minimum wage back to 2015 levels:

Wages should grow faster than inflation and if you don’t believe so at least be honest and say you believe living standards should fall – and in this case for the poorest paid workers.

In an unusual move, Opposition Leader Anthony Albanese endorses a 5.1 per cent increase to the minimum wage as inflation…

The Prime Minister says Anthony Albanese's push for wages to keep pace with inflation is "reckless", but Labor says the…

Government claims Labor leader is improperly interfering with independent process, but it wouldn’t be the first time a precise number…

The Guardian - AU
One subscription that gives you access to news from hundreds of sites
Anthony Albanese narrows scope of pledge to support 5.1% pay rise to match inflation