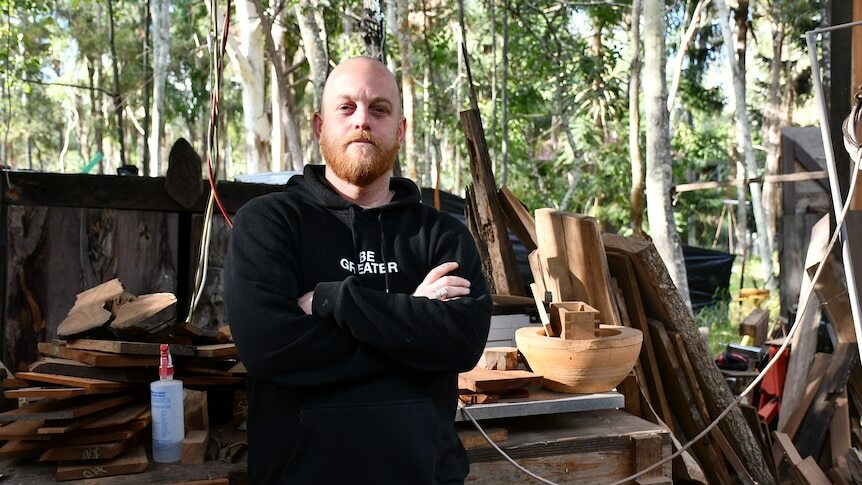 The crush of development is being felt by long-term residents of Chambers Flat, south-east of Brisbane, who are being compensated just $20,000 by Logan City Council for 1,000-square-metre parcels of land.

Anthony Aiken said he and his elderly parents, who bought a property along Chambers Flat Road in 1977, had been shocked at how few rights they had when the council announced the compulsory acquisition of a section of their land.

"That's the problem – people think that you're going to get compensated and that it would be fair and reasonable, but it's not," Mr Aiken said.

"The land laws are geared against you and there is no ability to challenge it or to say, 'Can we negotiate? Can we talk about what's fair market value?'"

Mr Aiken said just under 1,000 square metres from the front of his parents' property was now the property of Logan City Council and had been compulsorily acquired in order to widen Chambers Flat Road.

Despite the project being well underway, the family is yet to see any money at all.

"One thousand square metres is the Aussie dream block – everyone else has to pay $300,000, but they have the power to show up and say: 'This is ours now'," Mr Aiken said.

In 2019, the Queensland state government and Logan City Council signed a deal with nine developers to create the two new mass-housing regions of Flagstone and Yarrabilba.

In addition, some 170 kilometres of council roads will be upgraded through "developer contributions", in order to service the new regions, the Minister for State Development Cameron Dick said at the time.

Mr Aiken said while he accepted the future needs of the region, he believed the new routes gazetted by the council were putting commercial interests above the rights of residents.

"They didn't listen to anything we had to say. We have a lot of knowledge about the area -- they didn't want to listen. They decide on these plans and they just ram them through," Mr Aiken said.

Fears of losing home and business of 32 years

Tony O'Brien is the first person to say the road out the front of his Chambers Flat property is dangerous and needs to be fixed.

He and his wife Janelle have been the first-on-scene at two fatal traffic collisions, and dozens of others, directly out the front of their house and business.

The couple has lived at the property for 32 years where they run a boarding kennel for cats and dogs.

Also located on Chambers Flat Road, but subject to a different road upgrade to that of the Aiken family – Mr O'Brien fears the proposal in its current format will render his property and business worthless.

"Nobody from council has come out and talked to me about it. All they've done is send me a letter about it, with a red line through the front of my property cutting off all access," Mr O'Brien said.

In addition, Mr O'Brien's property is across the street from a new sewage treatment plant that will service Yarrabilba.

"I believe there's no respect at all, none at all," Mr O'Brien said.

"To send me a letter, with a red line through the front of my property and nobody even coming out to my property to discuss it, and how it will affect me. No, I believe I have been totally disrespected."

The Logan City Council declined the ABC's request for an interview.

In a statement, a spokesperson for the council said Chambers Flat Road was important connector road and upgrades were necessary for future road capacity.

In relation to Mr O'Brien's property, the council said a letter in the mail was the "first step" in a consultation process.

"Any land acquired by council for road purposes is required under state legislation to be compensated at market value," the statement said.