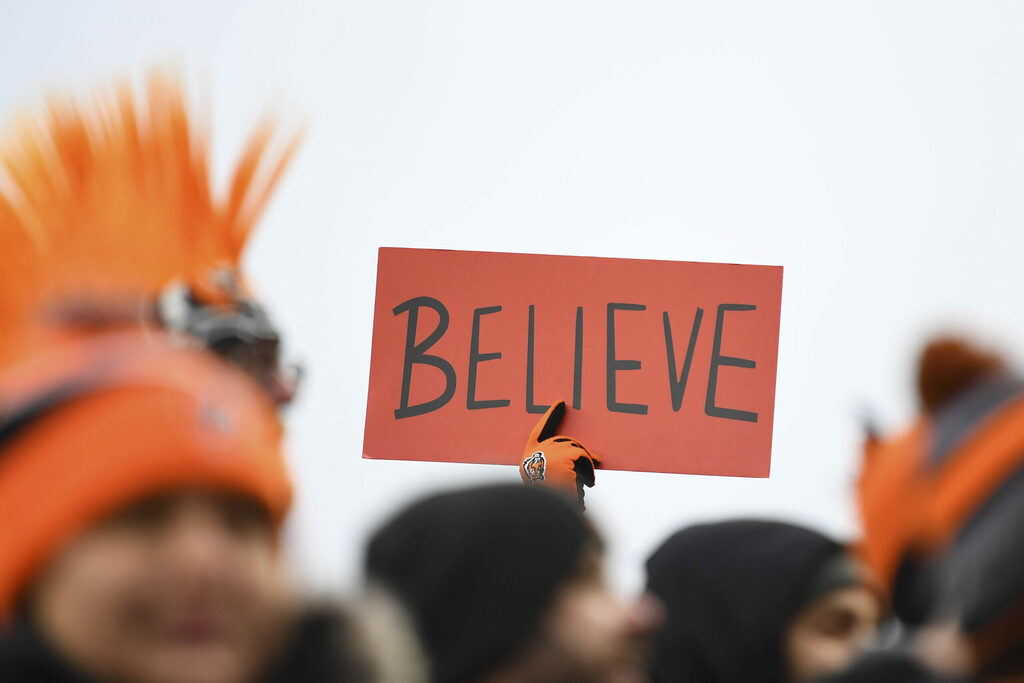 This is the online version of our daily newsletter, The Morning Win. Subscribe to get irreverent and incisive sports stories, delivered to your mailbox every morning.

Can you remember that far back?

Were you even alive?

I know where you weren’t back then – on this here internet reading content like this because that just wasn’t really an option back then. You definitely weren’t reading it on your phones because phones in those days stayed on the kitchen wall.

You know where the Cincinnati Bengals were on that chilly Sunday back when Instagram and Facebook and Twitter and TikTok weren’t even ideas in someone’s head? They were at home at Riverfront Stadium (which no longer exists) beating the Houston Oilers (who are now the Tennessee Titans) 41-14 in an AFC Wild Card game.

It’s true! Boomer Esiason threw for 150 yards and two touchdowns and Icky Woods rushed for a TD (and did his shuffle) in front of a raucous home crowd that had grown used to some postseason success.

The next week, though, the Bengals lost to the Raiders in what turned out to be Bo Jackson’s last NFL game thanks to a hip injury.

And so began 31 years without a playoff win for the Bengals. 31 long years. 8 playoff losses. No hope. Lots of sadness.

That streak, however, seems like it could come to an end this Saturday when Joe Burrow, Ja’Marr Chase and the AFC North-champion Bengals host the Raiders (who started this darn streak) in a Wild Card game. You have to think Paul Brown Stadium will be rocking and fans will giving everything they have to help this brutal streak come to an end… but there will also be lots of pressure on this team to get it done.

Only a few of these players were even alive the last time the Bengals won a playoff game but I’m sure they all know about the 31 years. It has to be impossible to ignore. That’s a lot of emptiness for a city that loves its football.

Everything points to the Bengals winning on Saturday. They’re division champs, their young offense is explosive, and they’re 5.5 favorites over a Raiders team that was the last team to get into the playoffs.

But Bengals fans know about the past and they know what can happen and they will likely be nervous up until the final whistle is blown. Four of their eight playoff losses since that game in 1991, after all, have happened at home, including their last loss in 2016 (the 2015 season) to the hated Pittsburgh Steelers.

There will be a lot on the line in the first playoff game of this six-game weekend and I don’t know what another loss would do to Bengals fans. Let’s just say it wouldn’t be pretty.

But a win would make Burrow, Chase, and the rest of the guys heroes in Cincinnati.

Well, at least until next week.

– College football season is over and it’s never too early to get ready for this year’s NFL draft. Dive into Charles McDonald’s first mock draft of the year and see where he thinks some QBs will land.

– Bill Belichick wore a Danger Zone hoodie to his press conference on Wednesday and NFL fans had lots of jokes.