On one side of the Dnieper River is the Zaporizhzhia nuclear power plant, visible in the haze. Six nuclear reactors and a cooling tower loom over a Soviet-built reservoir. On the opposite bank is Nikopol, a city in southern Ukraine known for its Cossack past and modern tube and metallurgical factories.

The distance between them is seven kilometres. Or, measured in rocket terms, about 15 seconds: the time it takes for a Grad missile fired by Russian soldiers ensconced in the atomic station to slam into Nikopol’s chestnut tree-lined boulevards. It is a small and terrifying interval between life and death.

The sprawling nuclear plant is Europe’s largest. In March, Russian forces seized it, as part of Vladimir Putin’s blitzkrieg operation to capture the whole of Ukraine. They rolled into the nearby city of Enerhodar and took the station’s local staff hostage. The plant is now on the frontline between Russian-occupied and Ukrainian-controlled territory.

In the first phase of the war Nikopol was peaceful, a place of safety for refugees from the eastern Donbas and other troubled regions. And then, on 12 July, Moscow began lobbing incendiary devices across the river. The Russians are using the nuclear station as cover. They have mined the complex. Multiple rocket launchers and tanks nestle among the reactors.

Even by Putin’s amoral standards, it is an astonishing act of recklessness. In his latest address on Friday, Ukraine’s president, Volodymyr Zelenskiy, accused Russia of “unconcealed nuclear blackmail”. A “terrorist state”, it was threatening the “whole world” with armageddon. He urged the UN and international community to do something.

On Friday, Russia’s permanent representation in the UN, Vasyl Nebenzia, said the country did not support a call by the UN secretary general, António Guterres, to create a demilitarised zone around the nuclear plant.

The situation is perilous. According to Ukraine’s state energy company, Energoatom, Russia has fired on the plant several times. Shells landed close to the fire station and director’s office, not far from a radioactive sources storage unit. Power cables and a wastewater pumping station were damaged. One worker was hospitalised, a shift rotation cancelled.

Moscow blames Ukrainian artillery and claims it is acting responsibly. Zelenskiy suggests the Russians are shelling the plant as a deliberate provocation, designed to discredit Kyiv and to alienate it from its international partners. The Guardian did not see any evidence in Nikopol of Ukrainian military activity. There were a few thumps in the distance. It was unclear which side was firing.

The Kremlin is trying to do something unprecedented: to steal another state’s nuclear reactor. Engineers are working to connect the facility to the electricity grid in occupied Crimea and cut it off from Ukrainian homes. One reactor has already been knocked out. It is a ghoulish game of radioactive Russian roulette, in a country that has known the 1986 Chornobyl atomic disaster.

Before the invasion Nikopol was home to 106,000 people. About half have fled. On Thursday more were packing up to leave after a devastating and vandalistic night-time barrage. Russia unleashed 120 Grad missiles on the district, killing three people in Nikopol and another 13 in the neighbouring town of Marhanets, and wounding dozens, including a 13-year-old girl. All were civilians.

At number 22 Viktor Usov Street, rescue workers were sifting through the debris. A corner had been gouged out of the five-storey residential building, as if clawed by some monstrous hand. Police had sealed the area off with tape. The remains of a rocket lay serenely on a grassy verge, broken in two: a motor and a tail section complete with fins.

“It was midnight. The rocket fell on the apartment next to me. We managed to pull the mum and son out alive. But the elderly father, Anatoliy, was already dead. He was under 2 metres of concrete,” resident Vitaliy Chornozub told the Guardian. He added: “The Russians are fucking pederasts. They bring pain, dirt and tears. I can’t understand why they did this.”

Another neighbour, holding a cup of coffee after a sleepless night, offered an explanation. “It’s jealousy,” Yana Sokolova said. “They can’t accept the fact we live better than they do. We are free. Russians are slaves. They want to make us slaves as well.” She added: “Putin is a terrorist. We will never surrender. His attempt to bully us won’t work.”

Sokolova said she would stay put, despite the early morning attacks, which have led some residents to drive out before evening curfew and spend the night in tents, set up among sunflower fields. The Grad knocked out the internet connection in Sokolova’s apartment but did not damage her ground-floor shop, she said. “We are tired. But our boys are standing firm,” she added.

It is unclear why Russia began offensive operations from inside the nuclear station and the adjacent settlement of Vodiane. One explanation is Moscow’s grandiose war is beginning to falter. Six months on, Russian troops have seized much of the east of the country, including the entirety of the Luhansk region, and a chunk of Donetsk. They are grinding forward, slowly and brutally.

In the south, however, Russia suddenly looks vulnerable. Since July the Ukrainian army has used US-made precision-guided Himars weapons to destroy four key bridges over the Dnieper River. And on Tuesday Kyiv struck deep behind enemy lines, wiping out Saky aerodrome on the west of Crimea, destroying at least eight war planes, and prompting thousands to flee back to the Russian mainland.

A Ukrainian counter-offensive looks possible, though not inevitable. Until it happens, Russia can use Enerhodar as a full-scale military base, as it did with Chornobyl during the first six weeks of the conflict. Russia’s nuclear agency Rosatom says it is now in charge of the plant. The International Atomic Energy Agency has demanded access, and called on the Russians to demilitarise it.

“It’s complete madness from Russia. They know the Ukrainian army can’t fire back,” said Olexsandr Vilkul, the head of the military administration in Kryvyi Rih, 40 miles north of Nikopol. Vilkul, a former deputy prime minister responsible for emergency situations, said Russia had become a “totalitarian sect”, run by a mad dictator obsessed with his place in history.

“It’s a strange cult. There is Lenin and victory in the second world war and a religious faith in the nuclear arsenal. Their god is the nuclear button,” he said. He added: “Putin doesn’t really care about Russia. He wants to take his place alongside Ivan the Terrible, Peter the Great and Stalin”. How would the war end? “Like Hitler, Putin will destroy his own country,” he predicted.

Further up Ustov Street, another Grad had punched a Lego-like hole into a third-floor flat. Its owner, Alexsandr Suvorov, said he had been at work on his computer at midnight when he heard the sound of an outgoing missile. “I knew they arrive from Enerhodar so I immediately moved into the next room. Suddenly, the door blew past me,” he recalled.

Showing photos of the wreckage on his mobile phone, Suvorov said he had been extremely lucky. The Guardian met him in the local administration building as he filed a police report. It was unclear when compensation might be paid, or where he might live now. “I would like to leave. It’s very dangerous. First I need to get plywood to cover up the hole,” he said.

Other residents were not as fortunate. A rocket landed on a block where most of the tenants were elderly people, killing a woman. A crane was parked up outside; municipal workers trying to make the building safe threw masonry down from a ruined upper storey. Three schools and more than 40 private buildings were damaged, as well as cars and shops.

“This is the reality we live in. We don’t know if we will wake up the next day,” said Anna Sidilova, the property’s manager. “Peaceful people live here. They didn’t have any weapons. They just want to live in their own homes.” What did she think of Putin? “He should be punished the same way, according to world law. He should be deprived of everything he has.”

Just across the road a Grad had landed on Nikopol’s Soviet war memorial. There was a deep crater in the alley of glory, not far from a needle-shaped monument and a wall inscribed with the names of soldiers who fell during the second world war. The strike spoke to the ideological vacancy of Putin’s Ukraine invasion, ostensibly carried out to protect Russian speakers and to return a wayward province to its historic Russian and Soviet roots.

Nobody knows when, or indeed how, Europe’s bloodiest conflict for 80 years will end. For now, Ukrainians are reacting with defiance, bravery and even humour to the carnage and horror around them. At a checkpoint between Nikopol and Dnipro, someone this week erected a tombstone by the side of the road. It had Putin’s face on it and a date, 1952-2022. Fresh earth had been shovelled to make a faux grave. 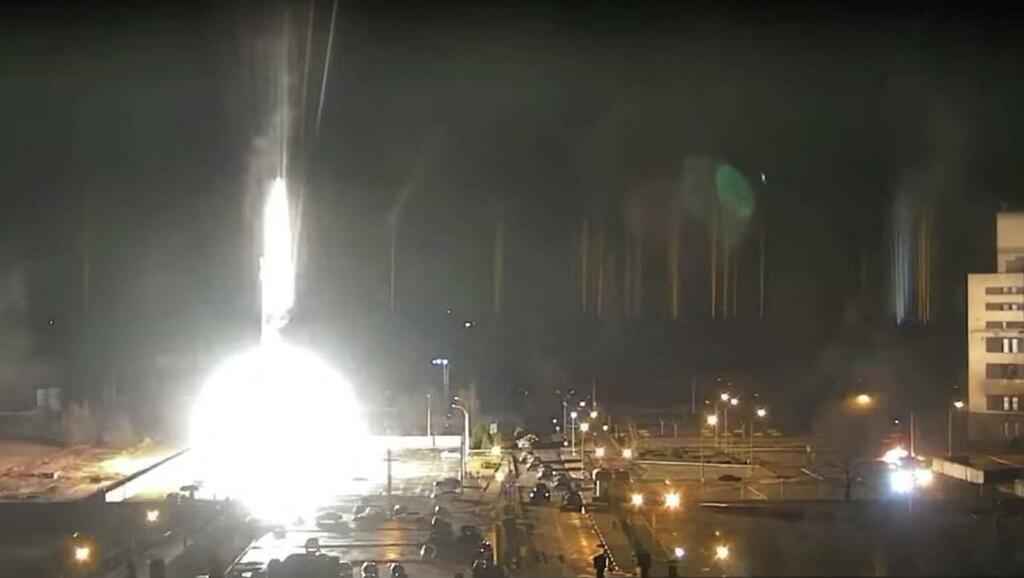 ‘Suicidal’ use of nuclear plant as shield risks fate worse than Chernobyl
Plumes of smoke yesterday rose over the Zaporizhzhya nuclear plant, a low-slung grey building on the banks of the river…

Irish Independent
From analysis to the latest developments in health, read the most diverse news in one place.
Russia’s military pounds residential areas across Ukraine

Russia’s military pounded residential areas across Ukraine overnight, as Ukrainian forces pressed a counteroffensive to try to take back an…

Kyiv and Moscow have exchanged blame for fresh shelling around Europe's largest nuclear facility, which is in Russia's control and…

Russia and Ukraine appear to have fought each other to a standstill, expending increasing energy on a publicity war.

Al Jazeera
One place to find news on any topic, from hundreds of sites.
Fresh shelling renews blame game over Ukraine nuclear plant

Ukrainian and Russian-installed officials reported shelling near Europe's largest nuclear power plant on Monday, with both sides blaming each other…