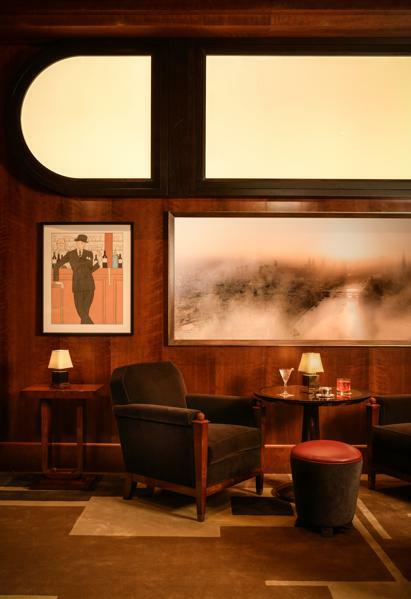 There’s Knickerbocker Glory on the menu and the perfect Old Fashioned in the bar. The Beaumont hotel has always held a candle to the ‘special relationship’ Britain has with the States, but its new revamp has taken this ‘love affair’ to new heights.

The Beaumont will also charm lovers of an Art Deco aesthetic, for it oozes the essence of the 1920s from every corner. (You half expect to see Louise Brooks – bobbed and beautiful – race out the revolving doors.) It starts on your arrival – you are greeted by liveried doormen – they’ll greet you by name, because they are prepped daily to know who is checking in. It’s that old-fashioned kind of personalised service that has fallen by the wayside at many other places.

Then, it’s on across the chequerboard-floored lobby, with its oil paintings and mahogany-shell sofas (upholstered in ‘Ellington’, a jazz-age velour fabric). At the lifts, you’ll watch the old fashioned bronze dials signify what floor they’ve reached. By the time, you’ve reached your room, you’ve practically arrived in the golden age of travel.

Originally opened in 2014, The Beaumont was inspired by the spirit of the grand hotels of 1920s London and New York (the building itself dates back to 1926). Its point of difference, however, is that it has a boutique – and bespoke – feel. Adding to this is the fact that, while the hotel’s location is as central as it gets  – just behind Oxford Street – it is nonetheless set on a quiet garden square and has just 50 rooms and 22 suites.

Taking advantage of the enforced enclosure bought about by the pandemic, leading New York-based designer Thierry Despont and London-based architects Reardon Smith have given the hotel an imaginative refresh. Part of the new look is a brand-new bar, lounge, al fresco dining terrace, and a rehanging of the hotel’s collection of 20th century art.

Now moved to its new home, directly off the lobby, Le Magritte Bar is inspired by the American bars that took 1920s Paris and London by storm. Wood-panelling (the entire bar is lined with Fiddleback Cherrywood), cherry-red leather seating and Art Deco lamps give it an authentic period feel. You can take a corner seat to survey the room, or, instead, lean on the leather-topped ebony bar to chat to the white-jacketed barman, and eye up the original Rene Magritte’s oil Le Maitre d’École – after which the bar is named.

Meanwhile, the old bar area has now been turned into the lounge, renamed The Gatsby Room, and offers all-day dining and afternoon tea, the latter given a transatlantic twist. (Think: Reuben Salt Beef, Smoked Chicken Caesar and Devilled Egg sandwiches and sweet treats such as Boston Cream Pie, Peanut Butter & Jelly Chocolate Macaroons and Key Lime & Macha Religieuse). Red walls, velvet tub chairs and large-scale oil paintings give the space an elegance, added to by the resident pianist who tickles the ivories of the baby grand. Back-lit bookshelves and an original fireplace add to the cocooning feel (check out the secret door behind one of bookcases, to lead you to the lifts). Meanwhile, a new terrace area, with 20s-style rattan chairs, also gives another option for dining – this time al fresco – with drinks and ‘bites’ on offer.

While Despont’s new updates are found across the public areas, rooms and suites have maintained their low-key glamorous appeal. Take The Schiaparelli suite, for instance. Named after the fashion house founded in 1927, it is one of the hotel’s most stylish. The vast apartment-style space, comes with a lounge, cloakroom, walk-in wardrobe, bathroom, bedroom and outdoor terrace which overlooks the roof-tops of  Brown Hart Gardens. You’ll want to move in, spats and all.

You are greeted with a gallery wall of Sem’s cartoons of flapper girl escapades, while a muted colour palette gives a calming feel throughout. Walnut and mahogany cabinets, soft velvet sofas and original portraiture all add to the understated – yet luxurious – appeal. On the terrace, there are sun beds and a dining table – ideal for private meals in the summer months.

Thoughtful touches bring an authenticity to the 20s theme – so there’s a bookcase of curated titles (some are about London at the time and others on leading figures of the day), there are Beaumont-branded playing cards and even a small piano – all nods to the bygone era yet which elevate your stay.

In the bedroom, the large-scale wooden bed is made with the softest white sheets – pillows are embroidered with a cursive ‘B’, just to remind you where you are. While mahogany bedside tables, old-style carriage clocks and photographs of silent movie startlets give a nod to the heritage of the building. Bathrooms are uber-glam, with heated mosaic floors, marble tubs and Dr Harris toiletries.

The heart of the Beaumont, however, lies in The Colony Grill. The revamp has seen it keep its clubby 20s New York atmosphere, with vibrant new murals and banquettes reupholstered in deep-red Italian leather.

From the signature shrimp cocktail and Colony cobb salad to oysters and steak tartare – the menu brings the best of American dining to London with new head chef Ben Boeynaems keeping true to the restaurant’s inspiration. While there’s Dover Sole, with brown butter and haselden potatoes, or Cornish Cod, with mussel chowder, the highlight is the ‘grill’, which offers a wide range of steak cuts, matured in the restaurant’s own salt maturing chamber. These are cooked over charcoal and oak and served with a bone marrow, parsley and shallot salad. Old fashioned at-your-table service – such as mixing up the cobb salad, carving the Porterhouse steak or flambé-ing the Bananas Porter – is a thing here. It all adds a frisson to the room – sparking conversation with those on the next table perhaps – and introducing an element of ‘theatre’. It’s a letter from America, to England with love.