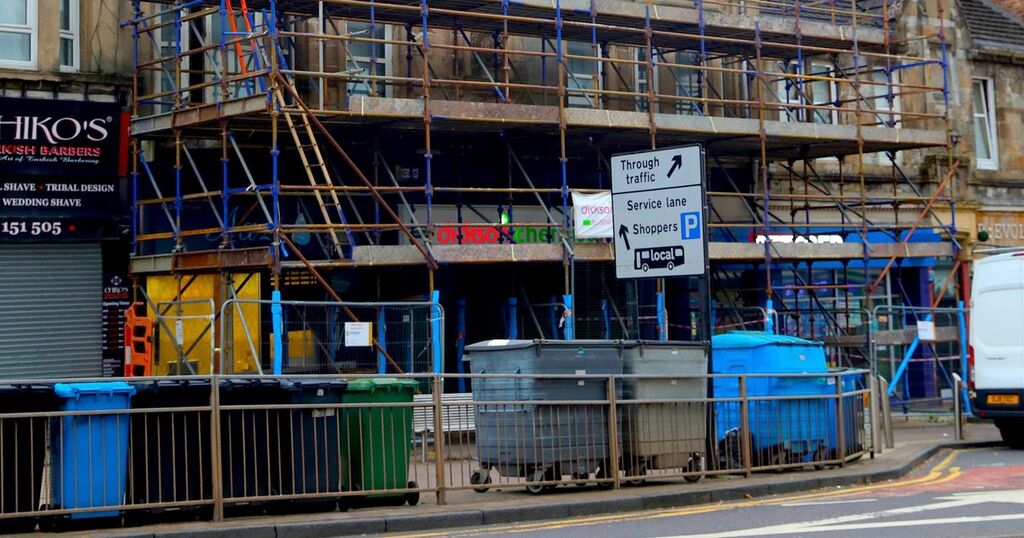 A Cambuslang building needing urgent repairs is a "ticking time bomb", according to worried residents.

People living in flats on the Main Street fear an accident is likely to happen unless almost £200,000 of repair work is carried out soon.

South Lanarkshire Council has already had to place scaffolding around numbers 104 to 110 on the street after a mullion fell off and landed on the pavement last December.

However the repairs, totalling £181,000, have been left unable to move forward until the owners of three businesses at the properties agree to pay the vast majority of the costs.

That has not yet happened, leaving the repairs in limbo.

Flat owner David Gourlay told Lanarkshire Live: "The owners are all agreed that the building needs fixed and we can't go on like this.

"We are all willing to pay in but the business owners have not responded yet. It means we're stuck. It looks awful, and there's always a worry that the building is just going to get more dangerous the longer it's not fixed."

A second flat owner, who declined to be named but has lived there for several years, agreed.

She said: "The building is a ticking time bomb – it's riddled with problems. Last Christmas we had a mullion coming off the roof and going right down to the pavement, which is why we had to get all this scaffolding put up to begin with.

"The worry is that it'll happen again, or something else will come off and hit someone below. The slates on the roof really need work.

"It's becoming really stressful for us. We're also having to pay for the scaffolding being up, with no idea how long it'll be there. It looks awful too, for the whole street."

A letter sent to residents from building factors JB & G Forsyth states: "As you are aware this proposed project has been ongoing for sometime and we originally requested funding be lodged by all proprietors by July 28 and this was subsequently extended to August 28.

"We require to advise, unfortunately, we have not received full funding over this project which is required prior to instruction.

"The four domestic flat owners have lodged their share of costs however we have not received funding from the three commercial owners."

Documents seen by Lanarkshire Live show the amount of repairs needing carried out on the Main Street building.

This includes considerable work on the building's roof and tiles, repairing stonework around the facade of the premises, and fitting new stone mullions.

The three properties below are a Betfred betting shop, Dickson's Chemists and a local nail salon.

Dickson's, who took over the premises there last year, stated that they were doing everything they could to find a solution to the problem but could not comment further.

A Betfred spokesperson said: "We have not declined to part in the repairs and we are happy to discuss with all relevant parties."