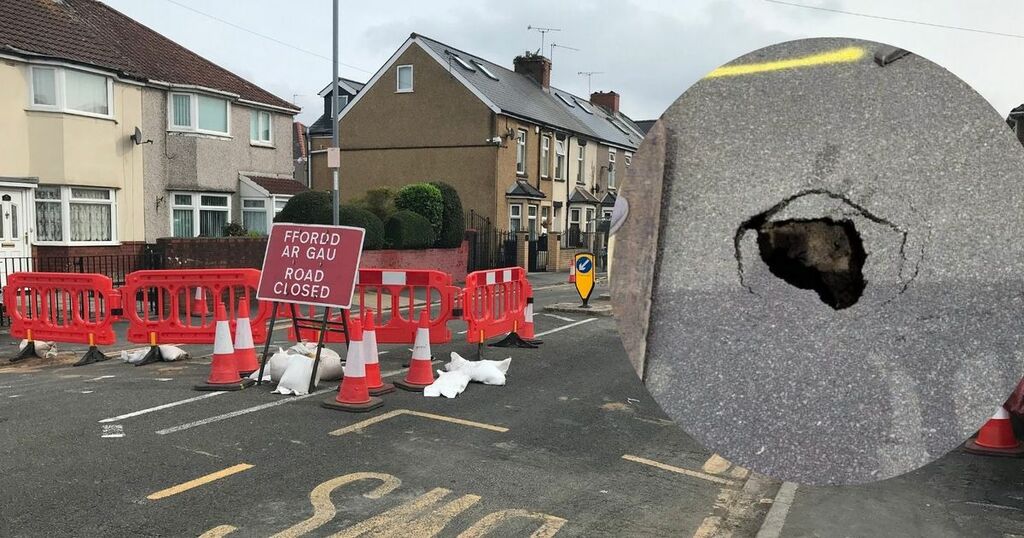 Residents living on a street that has been closed for nearly a week after a hole appeared in the road have called the situation a "nightmare".

Cromwell Road in Lliswerry, Newport has been closed since Wednesday due to a hole appearing in the road. Both Newport Council and Welsh Water have attended the site in the past few days, with the cause thought to be due to a leak from a damaged culvert carrying water under the road.

But residents living in the area said there have been countless instances of drivers moving the barriers and signs put in place and continuing to use the road.

Read more: The areas of Wales that would be under water and lost by 2050 based on current climate trends

Newport council said work to repair the hole is being carried out and that drivers moving the barriers "could be putting lives at risk".

Christine Ormond, who lives on Cromwell Road across from the hole, said: "We went out and we were trying to stop the traffic [from coming down]. As the days went on it got progressively bigger. The council had a look at it and said it was a Welsh Water thing, so they came out and thought it was a sewerage issue. They tested it and it wasn't sewerage."

Christine said land registry documents she'd seen showed that a reen - a running waterway that links a ditch or stream to a river - used to run through Cromwell Road to the back of Oliver Road.

She said she informed the council, who came and carried out work on the hole.

But she said there'd been several instances of drivers moving the barriers and using the road over the past few days, especially due to roadworks being carried out on the SDR and Wharf Road.

"Cars are just moving the barriers, driving up and down the road. One woman yesterday came down the footpath, scraped the whole side of her car because she caught the pillar.

"At half-past five this morning I looked out and someone else had moved the bollards, driving down the road.

"The residents have been out there policing it trying to stop the residents coming through."

Christine said she said the last few days had been "crazy."

"It's a nightmare for parking, because none of these [houses] can get their cars up their drives, they're all parking up the road. You can't park anywhere near [the street]. So the parking has gone crazy because people are just parked everywhere.

"So it's been really frustrating."

Christine said the fact the road was just around the corner from the busy St Andrew's Primary School was making it even worse.

"If I had to move my car and come back at a quarter past three, I wouldn't be able to park because everyone's just parking everywhere to get to the school. My daughter goes to school nearby, and I have to cross her in the morning because of all the transits doing all the work here. We haven't had a lollipop lady in two years either.

"Nobody knows anything. We've asked, if it's going to be a long time, for concrete boulders to be put across, because it's crazy the amount of people who are just driving through even though it's all blocked off."

Another resident, who didn't want to be named, said he'd seen a van and trailer come down the road while it was closed two days ago.

"I couldn't get the car out. They moved some things and I eventually got it out, but I couldn't get it back in. There's mud and everything everywhere. My car is now parked two streets away.

"Nobody has been here to tell me anything at all about what's going on out there. Nobody.

"It's absolute crap. The amount of cars coming down here, there's no excuse. There's signs all the way up the road, it's blocked. It's terrible."

Zoe Gibbons, who runs Gibbos chip shop on Cromwell Road, said the past week had been a "bit of a nightmare" and was putting customers off coming to the shop.

"Obviously they've put signs at the end of the road saying it's closed, so people aren't even coming up to the shop because they automatically think they can't drive up.

"You've got people moving the bollards and driving through. It's just causing a nightmare, to be honest with you.

"Then you've got the residents going mad because if that hole gets bigger, obviously it's near their houses.

"We've delivered since Covid and we've had to have the delivery cars park opposite, and if they're going one direction they've got to go all the way around.

"Nobody's explained to use what's happening. I thought someone might say what's going on, but we don't know."

Lliswerry councillor Allan Morris, who has visited the site a number of times since the hole appeared, said on Monday that he believed repair works "should take a few days" and urged people to be patient.

He said there had been a handful of "idiots" moving the bollards and using the road.

"Council contractors have exposed the damaged culvert. The plan is to remove further debris, inspect and repair the culvert and refill the hole," he said.

"Providing no further damage is revealed in the culvert, work should take a few days."

A spokesperson for Newport council said: "Work is continuing to repair the void under part of Cromwell Road and it is hoped this will be completed as soon as possible.

"It was discovered that a bricked culvert carrying an historic water course running under the carriageway was damaged and water had started to leak through the sides.

"This was not confirmed until late on Friday afternoon. Contractors returned to site today after the scheme of works to ensure a long-term solution was agreed.

"Contractors have to clean out the culvert and make repairs to the culvert before the road can be reinstated and opened up to traffic again.

"The road closure will remain in place except for residents accessing their homes. The pavement also remains open for pedestrians.

"We are aware that some drivers did move the safety barriers and bypass the roadworks by driving on the pavement despite the signage in place.

"The site was monitored over the weekend and we would urge people not to be so irresponsible. They could be putting lives at risk instead of taking a bit longer for their journey and using the diversion."