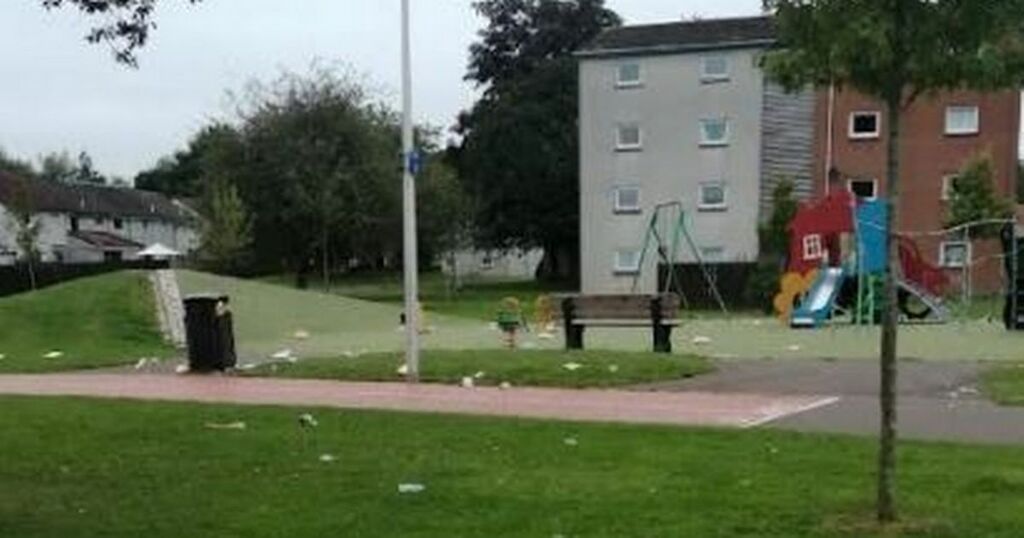 Secondary students in Perth have been accused of leaving the area around their school like “the aftermath of a festival”.

Residents in North Muirton are becoming increasingly irked by the behaviour of some pupils from Perth Grammar.

One parent contacted the PA this week saying he is avoiding taking small children to North Muirton Park because of the amount of litter on the grass.

He complained bins around the Bute Drive/Argyll Road playpark are bulging with takeaway trays and youngsters chuck paper and plastic bottles on the ground without a second’s thought.

The same parent claimed the area has already got a problem with seagulls and all the discarded food waste makes the situation worse.

And another local resident who contacted us to say rubbish was being thrown into gardens and streets said it was “pandemonium” during break times.

Both complainers said they went to the Grammar with their concerns but have got nowhere because the incidents take place off school grounds.

One dad told the PA he was going further afield to avoid his small children having to play amongst the wreckage left by antisocial school pupils at North Muirton Park.

“Perth Grammar School pupils leave this mess and expect my three-year-old kids to play in it,” he stormed.

“It looks like the aftermath of a festival. Kids are entitled to have their lunch, but they can’t be allowed to walk away leaving such a terrible mess. They show a total disregard for their own community.

“The worst time is after lunch on a Friday, there’s a scene of devastation in the park. Chip pokes all over the place. The whole grass area is covered. And it doesn’t get like this except on term time.”

Perth City Centre councillors told the PA they were aware of the issue and had received complaints.

Councillor Chris Ahern said he had spoken to the community safety team and would be seeking a meeting with the school.

He added: “I don’t understand why youths today think it is acceptable to behave like that and drop their lunch wrappers anywhere they like when they have finished their food. I have witnessed them at lunchtime drop their litter in front of someone picking it up.”

Councillor Eric Drysdale pointed the finger at the council administration for the issue, saying: “Anti social behaviour by some young people around the Grammar School is a continuing problem for local residents.

“Residents of North Muirton take huge pride in their local community, and it really is unforgivable that the Conservative administration has neither provided more well-placed litter bins around the school, nor emptied street bins often enough, nor deployed sufficient community warden resources to properly tackle these issues.”

A spokesperson told the PA: “We are aware of an issue of littering in the playpark on Bute Drive; we do not believe that the issue is solely down to the actions of school pupils, however, we acknowledge that some continued education for pupils on this issue is required.

“Information has been shared with parents asking them to remind their children of the importance of properly disposing of litter and not simply dropping it on the ground.

“The school will continue to promote waste awareness initiatives using the school’s social media platforms, the pupil bulletin and support from parents/carers via the parent bulletin.

“School staff have also been out in the local community during social times to support delivering this message.”