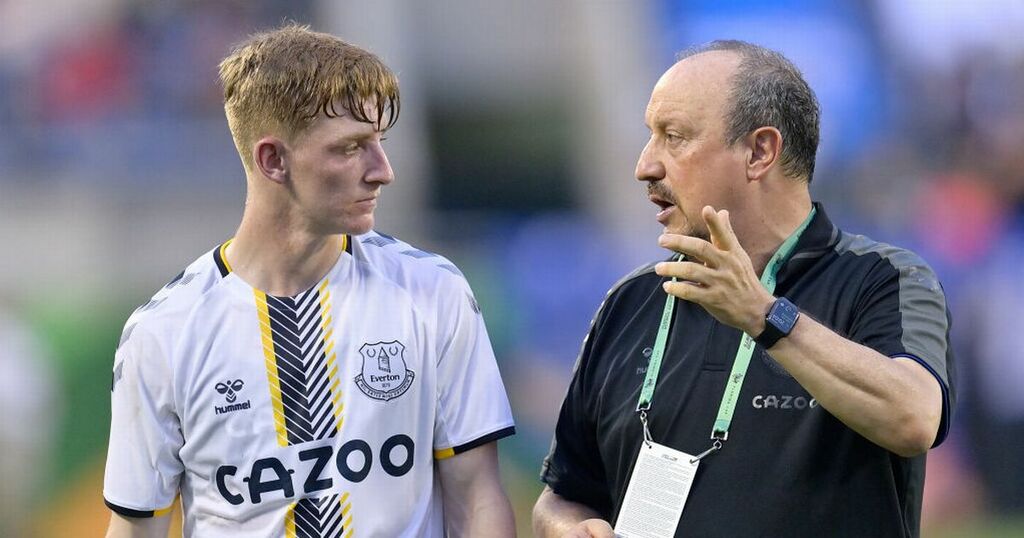 Rafa Benitez has admitted it is crucial for Everton to bring players through their academy in the future.

The manager has already given minutes to the likes of Tom Davies, Jonjoe Kenny and Anthony Gordon so far this season - while also handing Lewis Dobbin his first senior experience in the final pre-season match of the summer.

However, some over the last few years have questioned the pathway from the youth level and into the senior side.

And the boss believes getting that aspect right over the next few years could be crucial - explaining the important qualities homegrown stars can bring to the side.

Benitez told evertontv : “It is crucial for every single club, now and in the future, to have players coming from the academy.

“It is not for the first-team manager to bring players, they [players] have to be sure they are ready, they have to knock on your door and say, ‘Listen, I am ready’.

“The Premier League is very competitive and the level of the players is very high. That means it is more difficult for young players to come through.

“But our job is to improve them in the academy and give them the chance to play for the first team, if they are ready.

“It is massive for the club to have players coming from the academy, especially with the prices in the market now.

“But, also, because of the commitment of those players, the passion they have, the connection with the fans and the community."

Benitez has not made many changes to his Premier League line-ups so far this term, only using 13 different players in his starting 11s across three matches in the top division.

The boss explained that he must use rotation in the right way to manage the squad over the course of the campaign and make sure it doesn't hurt the team game-by-game.

“You have to find a balance in the number of players you are rotating. Also, it depends on the players," he added.

“There are players who, when they are not playing, still train really hard and try to learn the way you want to play – they can play and be ready.

“For others, it is more difficult [to manage being out of the team]. You need to identify these kinds of players and pick the right number in terms of rotation.

“If you rotate players and win, everybody will say, ‘Great’, because it is a bigger squad and everybody is involved. If you lose, ‘Wrong decision, you picked the wrong players’.

“We will change something if we have to, but, at the same time, always try to ensure we are putting on the pitch a team that can win.”