‘It feels like home’: why are Black Americans moving to Costa Rica? 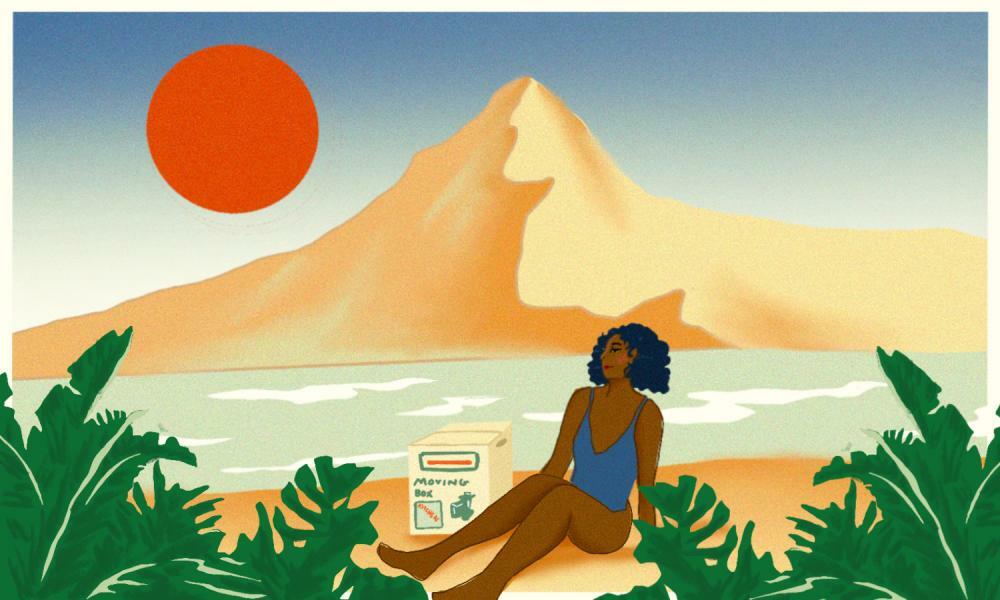 When she first set foot in Costa Rica, Davia Shannon knew instantly that she would eventually return permanently. She loved being able to do yoga with the jungle as her backdrop and surf whenever she pleased. Even more, she valued the sense of freedom she gained. Free of the fear, anxiety and pain driven by not feeling accepted in the US, Shannon had found her future home.

Upon arriving back in California after her 10-day visit, Shannon, now 46, developed a one-year exit plan which consisted of renting out her house, selling her car, rehoming her furniture and downsizing to 12 suitcases.

In March 2016, Davia Shannon packed up her belongings and left her lifelong home in Los Angeles to move 3,500 miles away with her twin daughters.

The adjustment wasn’t simple. Shannon, who comes from a large family, was hoping to recreate the same communal atmosphere in Puerto Viejo, with people who understood her struggles and came from a similar lifestyle, but admits that settling in was challenging. “I couldn’t find anybody that looked like me and when I did, I felt like I couldn’t really connect with them,” she says.

Even the Caribbean women proved difficult to get close to, and Shannon says they rarely showed her kindness. “I was even having a really difficult time getting information and doing the basic things, like figuring out where to pay my light bill,” she says. Most of the Caribbean people in the area speak English and Shannon is fluent in Spanish, so a cultural barrier played a greater role than language.

Learning from her struggles, Shannon decided to open a relocation business, Life-A-Holic Costa Rica, to assist other Black American expats moving to the country. Since launching in 2017, the business has assisted 176 Black and brown people with their desire to relocate to the south Caribbean coast of Costa Rica. The relocation company also offers membership into a support group, referred to as the Tribe. Shannon describes the group as a ready-made family that helps expats comfortably transition to life in Puerto Viejo. A directory, numerous resources and social events like Soul Food Sundays, karaoke nights, family dinners and birthday celebrations, are just a few offerings provided in the Tribe.

Shannon decided to extend her services to Black and brown folks for two reasons: most information about relocation was geared towards white people and most of what she read about Costa Rica online was negative and untrue. “I know the reason the negative information was perpetuated was because a vast majority of the people here have brown skin, and for some, that’s too scary to explore,” she says. “That’s fine, because my service is geared toward people who want to live in peace and harmony with people of the African diaspora.” She also notes that moving to another country can be difficult for people who started traveling later in life. Because Black Americans have less disposable income, and therefore less free time to travel during their youth, the transition to living in another country as an adult is not always smooth.

Think pieces and travel vlogs showcase that Black Americans move to Costa Rica for various reasons, but most say they are looking for an improved lifestyle. “The main thing my clients want to do is get off the hamster wheel. They want to stop having to work 80-hour weeks. They want to come buy some land, build a home and use that as a base to create,” says Shannon, who has bought three properties since moving to Costa Rica five years ago.

Although she had a high-paying job in Los Angeles, Shannon couldn’t accumulate enough wealth to pass down. “I felt if I was to continue living in California with this lifestyle, then I wouldn’t be able to leave anything to my kids. I didn’t want them to have to repeat what I was doing, which was working really hard, working weekends and always being in hustle mode,” Shannon says. She worked as a district manager for a leading human capital management company, but now she earns a livable income through her relocation company and renting out property on Airbnb.

In the United States, generational wealth is mostly obtained through property inheritance, career advancement or owning stocks. But Black people in America are the least likely group to own a home. And given that Black women in America make only 63% of what white men are paid, are the highest unemployed group among women, and are less likely to receive promotions, generational wealth is an unattainable feat for many. But in Puerto Viejo, where the average waterfront house costs roughly $100,000, owning a home or land is a more achievable goal.

Sequoia Carr, a 37-year-old freelance writer and editor, is shopping for land in Costa Rica with plans to build a house. She had never seen the value in paying the exorbitant prices of homes in the US – and farmland has always been her focus.

After living in New York and Los Angeles for most of her life, Carr found herself planting roots in Puerto Viejo at the height of the pandemic, in March 2020. Originally, Carr planned to visit the country for three months, but two weeks after she arrived, the borders were closed to slow the spread of the coronavirus. Her vacation morphed into a permanent move.

“I’ve traveled all throughout the world and this was the only place that I actually felt like it was a privilege to be Black. Not just welcomed, but people were happy that I was here, not just as a foreigner, but as someone who is Black,” she says. “In turn, this place felt like home.”

Safety also played into her decision to stay. “The very apparent racism and political uprisings made me feel as though it just isn’t safe to be in the United States as a Black person any longer,” Carr says, noting that her ability to work remotely made it easier for her to leave. “I get to wake up in a place where I feel less stress, less anxiety. It feels like home, I feel welcomed and I have all the things that I need to make me happy.”

The belief that America is not a safe place for Black people is shared among many expats seeking a more promising life in countries that are more accepting of diversity. In fact, according to Amali Tower, the founder and executive director of Climate Refugees, the oppression Black people in the US face is so severe that if Black Americans were to seek asylum in another country, they would qualify.

Costa Rica, which is ranked the most peaceful country in Central America, is one of the most politically stable countries in the world and experiences acts of gun violence nine times less frequently than the US. “In LA I would never allow my children out of the house without me, but here they can ride their bikes wherever they want and come and go as they please. They go to the beach, they walk the dogs, they surf, they’re happy and they’re safe,” says Shannon.

Janna Zinzi describes her life in Costa Rica as safe and stress-free as well. The 41-year-old travel writer made the decision to leave New Orleans during a three-month stay in Costa Rica after watching the US Capitol attack on 6 January on television. “I saw what was going on in the States and I booked an extra three months. After seeing that foolishness, I really had no desire to come back to America,” she says. (The same fears resulted in a spike in consultations for Shannon’s business – averaging five to 10 consultations a day for a month after the riot.)

Zinzi met Shannon through friends soon after moving to Puerto Viejo, speaking to the close-knit atmosphere in the Black expat community. She is now in Florida to renew her travel visa, sell her car and get her belongings out of storage before making her move permanent. Just being back in the US since June has reminded Zinzi why she left.

“Every time I leave [Costa Rica] for longer than a week, I can almost feel the stress, the tension, the rage, the trauma and the anger. Especially in Black folks and communities of color,” she says. “I know my mental health and my physical health is a lot better when I’m outside of the United States.”

Her worries surrounding police brutality, mass shootings and constant exposure to microaggressions do not exist in Costa Rica. “I feel more relaxed, I feel freer because there’s things that you don’t have to think about there that you think about in the States.”

Despite the welcoming culture and feeling of belonging, being a Black American woman in Costa Rica does have some downsides, expats say, but none too large to handle. Natural hair salons are not easy to come by, ethnic hair products at the supermarket are scarce, and dating can be challenging if you’re seeking out a Black partner with a favorable economic standing, due to a limited economy as well as racial exclusion in employment opportunities.

Because of Costa Rica’s suffering economy and strict work visa policy, the majority of Shannon’s expat clients are freelancers, work remotely or are retired. Many of them speak Spanish on an intermediate level, but fluency in the language is not at all necessary to get around. Nevertheless, the minor setbacks do not outweigh the pros of living in a safe environment where your existence is humanized.

As Carr said: “There’s a lack of convenience here, but the beauty of it is that I get access to the ocean and the mountains, and a different quality of life.”