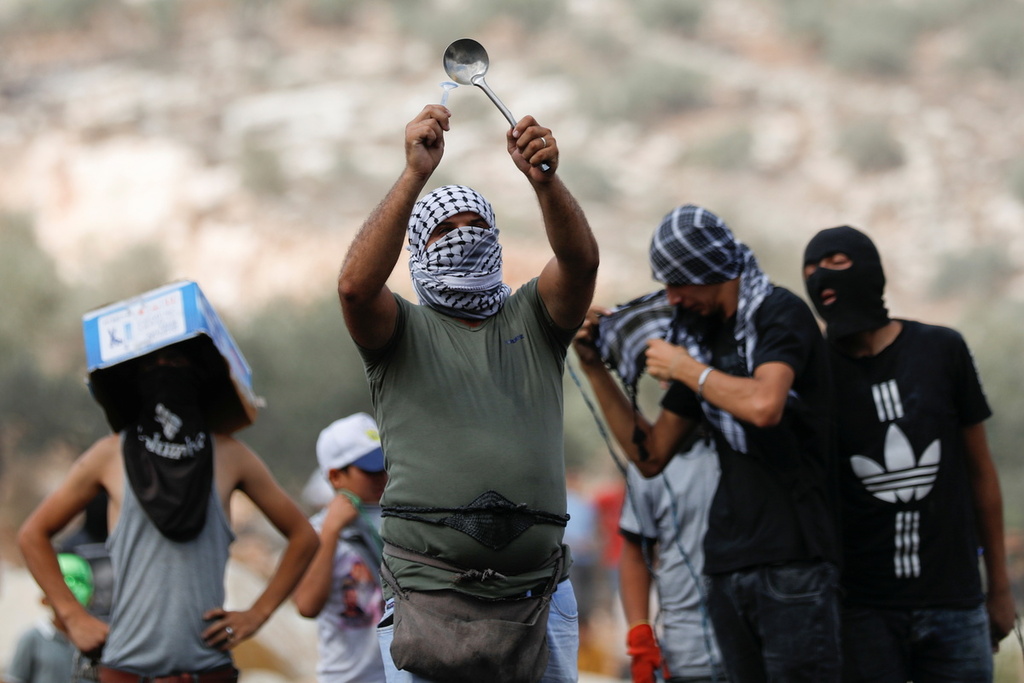 Israeli forces on Saturday captured two more of the six Palestinian militants who escaped from a maximum security jail this week, a police spokesperson said.

The two men were found in a truck parking lot in an Arab village in northern Israel, near the city of Nazareth, where two other escapees were captured hours earlier.

Their prison break on Monday, through a hole in their prison cell floor, delighted Palestinians and embarrassed Israel.

Footage distributed by Israel Police showed officers leading the two men, blindfold and handcuffed, into a police vehicle as a search for two more inmates who are still at large continued.

The six men have either been convicted or are suspected of planning or carrying out deadly attacks against Israelis.

Mohammad al-Arda, brother of Mahmoud al-Arda, a member of the Islamic Jihad militant group who escaped and was captured on Friday, said it appeared that though the actual prison break was meticulously planned, its next stages were lacking.

"There was no back-up from the inside nor coordination with the outside," al-Arda said. Though saddened by his brother's capture, he said he was happy about what he described as a blow to enemy morale.

Israel's Haaretz newspaper said a suspicious villager had tipped off police when he was approached by haggard-looking men who had asked for food and a ride, while military trackers closed in on the men's escape routes.

The escape and subsequent capture has raised tension in the occupied West Bank and Gaza. After night fell on Saturday, Palestinian militants fired a rocket from the Gaza Strip into Israel. The Israeli military said it was intercepted.

There were no immediate reports of casualties.

'WE ARE IN GREAT PAIN'

One of the men captured on Saturday was Zakaria Zubeidi, a high-profile former commander of the Fatah group's Al Aqsa Martyrs Brigades in the West Bank city of Jenin during the second Palestinian uprising.

The other five prisoners are Islamic Jihad members.

Zubeidi, who once received Israeli amnesty, was rearrested by Israel in 2019 after his alleged involvement in recent shooting attacks.

Zubeidi's family said that his grandfather was one of 66 inmates who had escaped an Israeli jail in 1958 after a deadly prison riot. Reuters was unable to verify this account.

Some family members of Zubeidi's Israeli victims had voiced shock and anger over his escape.

"We are in great pain. Zakaria Zubeidi was the instigator of the attack in which my father was murdered, one of six victims," Hila, the daughter of Ehud Avitan who was killed in a 2002 Palestinian attack in Israel, told N12's News on Monday.

Israeli officials have pledged a thorough investigation into apparent security lapses that allowed their escape.

Palestinians see members of armed groups jailed in Israeli prisons as heroes in their struggle for statehood in territory Israel captured in the 1967 Middle East war. Israel says Palestinians involved in violent anti-Israeli activities are terrorists.

"We hope the brothers who broke the chain and are still free get safe to base," said Bassam Assadi, an Islamic Jihad leader in Jenin.

(Additional reporting by Ali Sawafta in Jenin, Nidal al-Mughrabi in Gaza and Maayan Lubell in Jerusalem; Editing by Raju Gopalakrishnan and William Mallard)