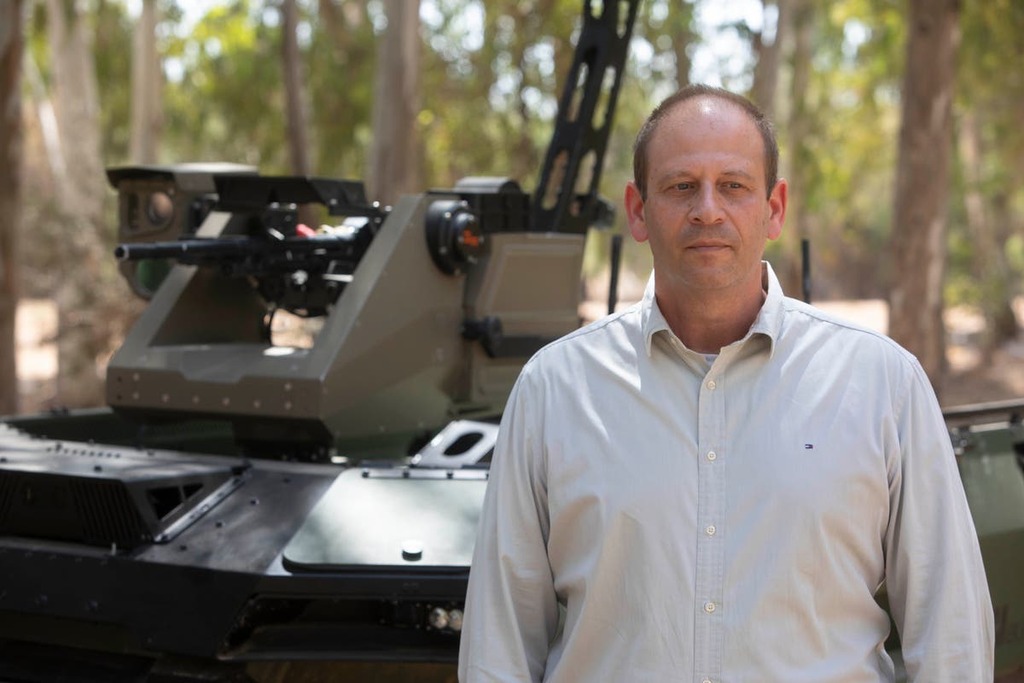 An Israeli defense contractor on Monday unveiled a remote-controlled armed robot it says can patrol battle zones, track infiltrators and open fire. The unmanned vehicle is the latest addition to the world of drone technology, which is rapidly reshaping the modern battlefield.

It is operated by an electronic tablet and can be equipped with two machine guns, cameras and sensors, said Rani Avni, deputy head of the company’s autonomous systems division. The robot can gather intelligence for ground troops, carry injured soldiers and supplies in and out of battle, and strike nearby targets.

It is the most advanced of more than half a dozen unmanned vehicles developed by Aerospace Industries' subsidiary, ELTA Systems, over the past 15 years.

The Israeli military is currently using a smaller but similar vehicle called the Jaguar to patrol the border with the Gaza Strip and help enforce a blockade Israel imposed in 2007, after the tiny territory was seized by the Islamic militant group Hamas

Gaza is home to 2 million Palestinians who have largely been locked in by the blockade, which is also supported to some extent by Egypt. The border area is the site of frequent protests and occasional attempts by Palestinian militants or desperate laborers to infiltrate into Israel.

The Israeli army did not respond when asked for details on how they use the Jaguar, one of many tools, including drones armed with guided missiles, that have given it vast technological superiority over Hamas.

Unmanned ground vehicles are being increasingly used by other armies, including those of the United States, Britain and Russia. Their tasks include logistical support, the removal of mines and firing weapons.

The tablet can control the vehicle manually. But many of its functions, including its movement and surveillance system, can also run autonomously.

“With every mission, the device collects more data which it then learns from for future missions,” said Yonni Gedj, an operational expert in the company's robotics division.

Critics have raised concerns that robotic weapons could decide on their own, perhaps erroneously, to shoot targets. The company says such capabilities exist but are not being offered to customers.

“It is possible to make the weapon itself also autonomous, however, it is a decision of the user today,” Avni said. “The maturity of the system or the user is not there yet.”

Bonnie Docherty, a senior researcher from the arms division of Human Rights Watch, said such weapons are worrisome because they can’t be trusted to distinguish between combatants and civilians or make proper calls about the harm attacks may do to nearby civilians.

“Machines cannot understand the value of human life, which in essence undermines human dignity and violates human rights laws,” Docherty said. In a 2012 report, Docherty, a lecturer at Harvard Law School, called for fully automated weapons to be banned by international law.

The defense magazine Janes said the development of autonomous ground vehicles has lagged behind autonomous aircraft and boats because moving across land is far more complex than navigating water or air. Unlike the open ocean, vehicles have to deal with “holes in the road” and know exactly how much force to apply to overcome a physical obstacle, the report said.

The technology in self-driving vehicles also has raised concerns. Electric car manufacturer Tesla among other companies, has been connected to a series of fatal accidents, including an incident in Arizona in 2018 when a woman was hit by a car driving on autopilot.

The Israeli drone vehicle is being showcased at this week’s Defense and Security System International arms trade show in London.