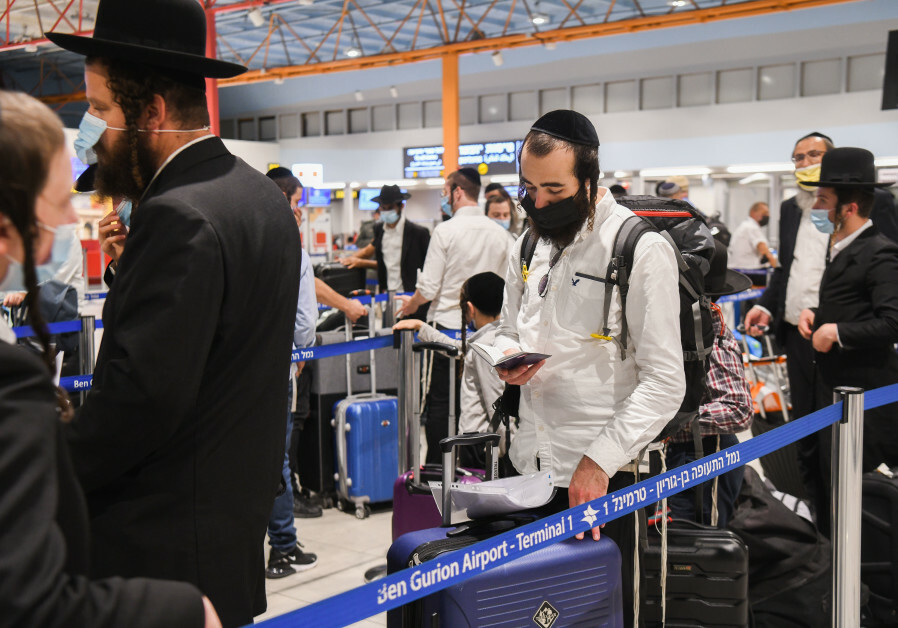 Health correspondent Rossella Tercatin has run a series of reports in recent weeks in this paper about the ongoing confusion regarding corona regulations for would-be travelers to Israel. As we observe the Yamim Noraim (Days of Awe) between Rosh Hashanah and Yom Kippur, we urge the government to take stock of the situation and clarify when foreign nationals will be allowed into the country and what they will have to do.

When the Health Ministry announced a welcome change in its quarantine policy for Israelis from September 10, Tercatin writes, they rushed to make reservations for vacations abroad and many hoped the policy would apply to foreign visitors as well. The new policy exempts from full isolation individuals who have received a third shot; who have been vaccinated twice or recovered in the last six months; or who have recovered and received one shot.

For now, Israel does not yet recognize foreign vaccinations or recovery documents. The one category of foreigners who may visit as tourists are vaccinated or recovered first-degree relatives of Israeli citizens. Still, they are required to obtain an entry permit issued by Israel’s Population and Immigration Authority.

Once in Israel, if they want to be considered immunized, they need to undergo a private serological test to prove the presence of antibodies in their blood. Once they do, they receive an Israeli recovery certificate, specifying that the document was released based on the serology test performed in Israel and not elsewhere.

While the first statement about the new quarantine policy released by the ministry did not contain anything to suggest that the exemption from isolation would not apply to individuals holding such certificates based on serology results, subsequent versions did require recovery certificates to be based on a PCR test performed in Israel, Tercatin reports. It’s all very confusing.

To add to the confusion, although there is still no green light for visitors from abroad, health officials – including Coronavirus Commissioner Prof. Salman Zarka – told The Jerusalem Post that the rules would be changed to include individuals vaccinated abroad in the near future. But when?

On Monday, just before Rosh Hashanah started, Dov Lipman, who recently established the NGO Yad L’Olim to help new immigrants navigate Israeli bureaucracy, was told by the Health Ministry that it had changed its policy, allowing people vaccinated abroad to be exempt from isolation based on a serological test. He posted the new rules.

On Wednesday night, after Rosh Hashanah ended, a Health Ministry spokesperson denied what Lipman had posted, and told the Post that the ministry is still working on the issue. Lipman stands by his post, which he verified numerous times.

So where does that leave us? According to the Health Ministry, individual tourists are still not allowed into Israel, and there is not yet a date when that will change. According to the Tourism Ministry, groups of between five and 30 people from countries on Israel’s green, yellow and orange lists will be allowed to enter the country starting a week from Sunday, provided they are fully vaccinated and have negative COVID-19 tests.

The government is said to be considering reopening to individual tourists in November, but this has not yet been confirmed by any official source.

Confused? Join the club! What we can say is this: the government deserves praise for leading the world with the third vaccine (booster) for Israelis, and for allowing returning Israelis from most countries to avoid quarantine. But with regard to foreigners, it’s time for the government to be clear about its policy and to issue rules that make sense.

If and when people are allowed into the country, it must be made clear to whom this applies – including from what countries – and what precisely they need to do. If Israelis can avoid quarantine without a serological test, then why not simply require an antibody test from foreigners, and once positive, allow them out of quarantine?

Tourism is a key to Israel’s economy. In 2019, a record 4.55 million tourists flocked to the Holy Land. We look forward to welcoming tourists again to Israel in the coming year, but in order to prevent further confusion and protect both Israelis and foreigners, we all need to be clear about the rules.