Israel is struggling with COVID-19, despite high vaccination rates. What lessons can Australia learn? 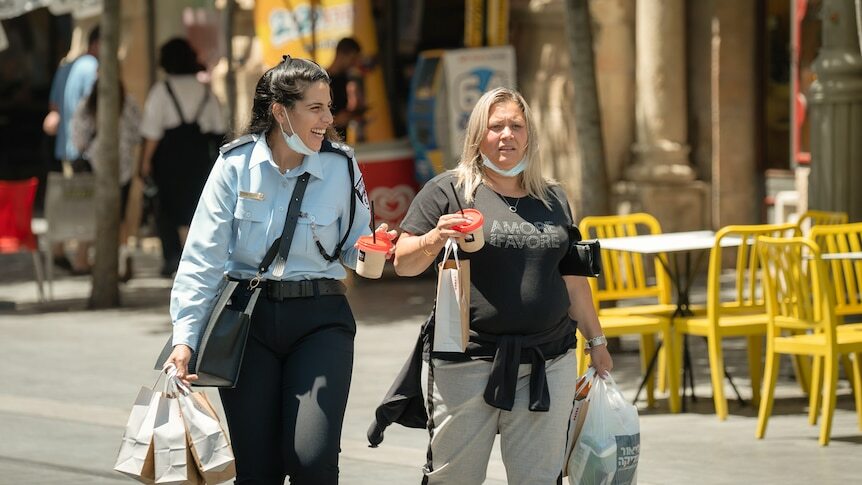 Just a few months ago, Israel was the picture of COVID-19 vaccination success.

After an early and rapid rollout, and with the majority of its adult population fully vaccinated, Israel lifted virtually all COVID-19 restrictions — and life in the Middle Eastern nation returned to an almost pre-COVID normal.

But the celebrations — and optimism that herd immunity had arrived — didn't last long.

By late June, case numbers began to climb, and they haven't stopped.

Rates of hospitalisations and ICU admissions are also increasing, with almost 1,100 people currently in  hospital and nearly 700 considered "seriously ill".

Israel recently recorded the highest seven-day rolling average of COVID-19 cases per million people of any country in the world.

So why, in a nation with relatively high vaccination rates, are COVID-19 cases still surging?

And as Australia looks to reopen, what lessons can we learn?

Israel shot to an early lead in the race to vaccinate, inoculating almost 80 per cent of its citizens aged 12 and over by June, the vast majority with the Pfizer vaccine.

With leaders confident they had conquered COVID-19 and the risk of it spreading, the country lifted virtually all movement restrictions and mask mandates.

"They completely dropped their guard," said Kim Mulholland, a paediatrician at the University of Melbourne and member of the WHO's Strategic Advisory Group of Experts on Immunization.

"There were lots of big gatherings, religious meetings, and all sorts of events that happened in June, in the middle of summer."

At the same time, the highly contagious Delta variant arrived on Israel's shores, first emerging in school-aged children and quickly spreading to their parents.

Leading infectious diseases expert Sharon Lewin said without any measures to control the Delta variant, it was difficult to stop chains of transmission, even with reasonably high rates of vaccination.

"What we've learned from [Israel], and what's consistent with the modelling … is that even at 80 per cent, you need to have some public health measures in place to contain transmission," said Professor Lewin, director of The Doherty Institute.

While overall adult vaccination rates are high, there are pockets of Israel's population that remain unvaccinated, including some ultra-orthodox Jewish communities.

Making things more challenging is the fact that 25 per cent of Israel's population is younger than 12, meaning only 68 per cent of its whole population is fully vaccinated — a threshold too low to achieve herd immunity.

Case numbers have surged, but vaccines are still working

In mid-August, about 60 per cent of people hospitalised in Israel with severe COVID-19 had received two doses of the Pfizer vaccine.

The Israeli health ministry published a report suggesting the effectiveness of the vaccine in preventing severe disease had dropped from over 90 per cent to just 64 per cent.

But this figure is misleading — and an example of a phenomenon in statistics called Simpson's paradox.

It's complicated, but essentially means that a trend that appears in several groups of data can disappear when those groups are combined.

"In Israel, when you look at the age-adjusted numbers for vaccination, the chance of you being hospitalised if you're over 60 is reduced 40-fold if you're vaccinated compared to if you're unvaccinated."

She said the fact fully vaccinated people were still being hospitalised was a reflection of very high vaccination rates, and the fact that no vaccine is perfect.

"The benefit of vaccination is that it reduces your chance of hospitalisation and death by about 90 per cent, but it's not 100 per cent," Professor Lewin said.

"So there will still be people that get hospitalised and die, even if they're vaccinated."

Fortunately,  the relative number of deaths from COVID-19 in Israel is much lower than it was during the country's second wave.

This pattern is being consistently observed around the world in countries with high vaccination rates.

The cost of early vaccinations and waning immunity

That being said, Israeli authorities are concerned about the effectiveness of COVID-19 vaccines waning over time.

The majority of people suffering severe illness are over the age of 60 and received the COVID-19 vaccine at least five months ago.

"Most of the elderly in Israel were vaccinated with Pfizer, three weeks apart, back in January and February," Professor Lewin said.

"That's the other factor that's at play here. It's not just whether or not you were vaccinated; the time from vaccination seems to be important too."

Preliminary data suggests protection against symptomatic infection is reduced over time, with Israelis vaccinated in April and May appearing to have much better protection than those vaccinated back in January.

But it's difficult to tease out how much of this is a result of the vaccines themselves, and how much is influenced by the Delta variant, the relaxing of restrictions, and the health status of people vaccinated early on — many of whom had underlying medical conditions.

"Protection against severe disease seems to be more related to cellular immunity — T cell immunity specifically — and [protection] against infection, it's more related to neutralising antibodies," he said.

While neutralising antibodies decrease over time, protective immunity provided by memory T and B cells is expected to be long-lasting.

To try and tackle the surge of new COVID-19 cases, Israel has reintroduced some restrictions, including caps on public gatherings and masks in certain settings.

These were first rolled out to people over 60, and are now available to everyone over the age of 12 who received their second COVID-19 jab more than five months ago.

Professor Lewin said although booster shots seemed to provide a clear benefit to people over the age of 60 and immunosuppressed people, it wasn't clear yet whether they would be necessary for everyone.

"The best thing to do is reduce the overall amount of COVID transmission across the world, and that's only going to happen when low and middle-income countries are vaccinated."

In August, the World Health Organization called for a temporary moratorium on booster shots by wealthier countries, in order to free up doses for countries where most people haven't even received one dose.

"If we really do need booster doses, I think we need a much more tailored approach," Professor Lewin said.

"So it might be people over 60 … or it might be that you measure a person's antibody response, you see it's low, and they get a dose."