Israel's Supreme Court on Tuesday froze the eviction of four Palestinian families from the flashpoint east Jerusalem neighborhood of Sheikh Jarrah, where Jewish settler groups have sought to seize control.

Justice Isaac Amit, in a ruling by a three-judge panel, wrote the families would be recognized as protected tenants, and would pay a Jewish settler group a symbolic annual rent of 2,400 shekels (about $740) "until a determination of ... land rights".

The four families in annexed east Jerusalem were at the heart of clashes that helped spark the 11-day war last May between Israel and armed groups in the Gaza Strip.

Israel annexed east Jerusalem -- which Palestinians claim as their future capital -- following the 1967 Six-Day War, a move not recognized by most of the international community.

Sheikh Jarrah has become a symbol of Palestinian resistance against Israeli control of Jerusalem.

The Palestinian families had been seeking a right to appeal a lower court decision that Jewish settlers owned the land.

In Tuesday's ruling, two of the three judges granted that right to appeal.

"The decision to allow them to appeal is just a preliminary decision," said advocacy coordinator Gaal Yanovski at Ir Amim, a Jerusalem group opposed to settlements.

"Two of the three judges decided they are freezing the eviction until there will be a land settlement of title."

Tuesday's decision was part of a years-long legal battle waged by Palestinian families, resisting efforts by Jewish Israeli organizations to reclaim property owned by Jews in east Jerusalem prior to Israel's founding in 1948.

The court recounted that Jordanian authorities controlling the area in 1954 built homes for Palestinian families, in exchange for those residents agreeing to relinquish their United Nations refugee status.

However, the land rights of the residents were not recorded by Jordanian authorities before the 1967 conflict.

Jewish groups claimed the property shortly after, using an Israeli law that allows Jews, but not Palestinians, to recover Jerusalem property lost in the 1948 war to create Israel.

In August, the families refused a "compromise" proposed by Israel's top court, in which they would be recognized as protected tenants in exchange for recognizing Israeli ownership of their homes.

The new ruling leaves the final status of the property open to a decision by an office within Israel's Ministry of Justice, Yanovski said.

"The decision of the Supreme Court today cancels the eviction while the issue of ownership is decided," he said.

Pro-settler lawmaker Itamar Ben-Gvir, who has opened a "parliamentary office" beside disputed homes, blasted the ruling as "a dark, illegal decision" and pledged to protest it.

More than 200,000 settlers now live in east Jerusalem, alongside about 300,000 Palestinians. The Jewish settlements there are considered illegal under international law. 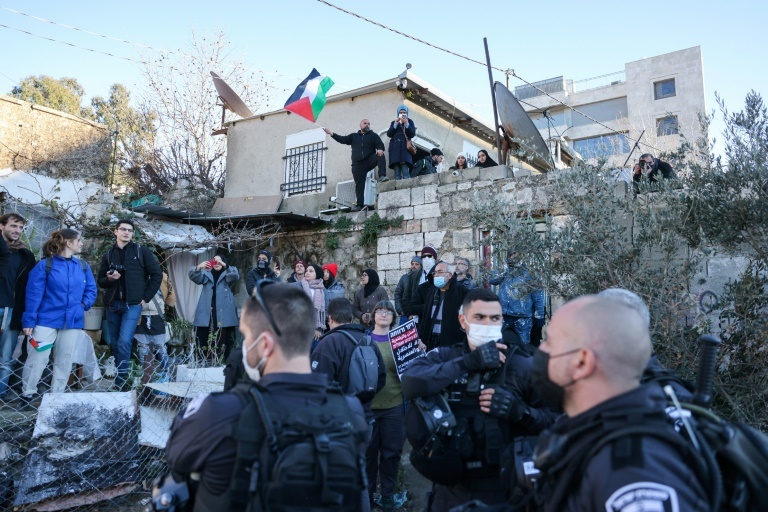 While the Mount of Olives rising east of the Old City includes sites that are holy to three monotheistic faiths,…

Israel is controlling the fate of five million Palestinians in the occupied territories and practicing systematic, active and continuous violence…

Asharq Al-Awsat
One subscription that gives you access to news from hundreds of sites
How to work for a two-state solution for Israel, Palestine - opinion

If there is any chance of saving the two-state solution then at least two things need to happen: Elections in…