By Guillaume Lavallee with Hossam Ezzedine in Ramallah 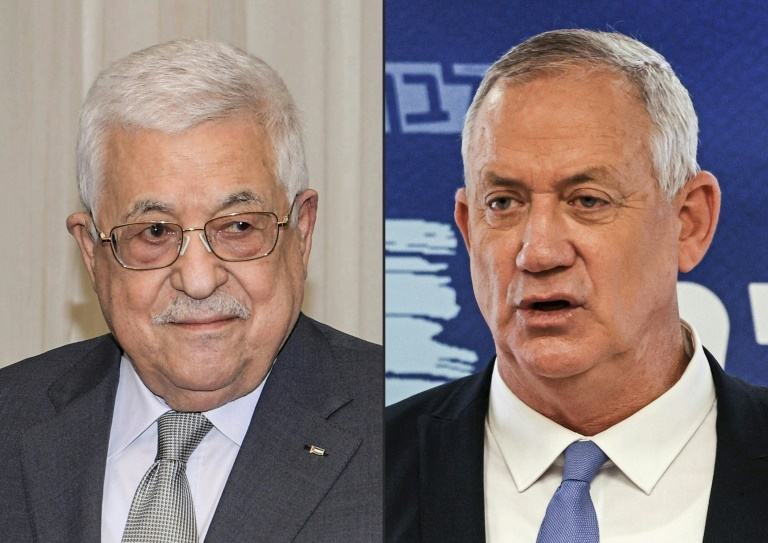 Jerusalem (AFP) - Recent visits by three Israeli cabinet ministers to Palestinian president Mahmud Abbas indicate both sides are keen to promote stability and improve ties, even if peace talks remain off the table for now.

The Israeli coalition led by hardline nationalist Prime Minister Naftali Bennett -- which ranges from left-wingers to Islamists -- has no common position on ending the decades-long Palestinian conflict, complicating any formal diplomatic negotiations.

But Bennett has said his government will aim to improve economic conditions in the West Bank, the Palestinian territory under Israeli military occupation since 1967.

For Abbas, who was largely ignored by Bennett's predecessor Benjamin Netanyahu, moves by Israel to bolster his position would likely be welcome, analysts said.

A poll last month by the Palestinian Center for Policy and Survey Research found that a record 80 percent of Palestinians want Abbas to resign, reflecting deep frustration with the 86-year-old leader.

For Abbas and his Palestinian Authority -- facing mounting anger over endemic corruption and a crackdown on human rights activists -- talking to Israel is partly about "taking advantage of the diplomatic context", said Uzi Rabi, director of the Moshe Dayan Middle East Research Center at Tel Aviv University.

That context, Rabi said, is shaped by an Israeli coalition that includes leaders committed to a two-state solution and, for the first time ever, an Arab-Israeli party.

US President Joe Biden's administration is also seen as far more sympathetic to the Palestinians than Donald Trump, who was accused of egregious bias towards Israel.

The first high-level Israeli visit to Abbas in Ramallah, which came days after Bennett met Biden in Washington, was by Defence Minister Benny Gantz.

Bennett is the former head of a lobby group representing Jewish settlers, who live in West Bank communities considered illegal under international law, and he opposes the creation of a Palestinian state.

After Gantz met Abbas, a source close to the premier clarified that the discussions were on security issues and that "there is no peace process with the Palestinians nor will there be" under Bennett's leadership.

"We have a common mission," Horowitz wrote on Twitter. "To maintain the hope of a peace founded on the two-state solution."

The tweet included a photo of him standing with Abbas.

As Abbas has stepped up his diplomacy with Israel, he has also maintained a hard rhetorical line.

In an address to the UN General Assembly last month, he said that if Israel did not withdraw from all occupied territory within a year, he would no longer recognise the Jewish state based on pre-1967 borders.

Rabi of Tel Aviv University said Abbas' goal with that unrealistic ultimatum was to suggest that if there was no progress on peace talks during his tenure as president, a "chaotic" situation could result.

Palestinian analyst Diana Buttu stressed the limitations of Abbas's dealings with Israel, saying the Jewish state was open to discussing humanitarian issues, but it "does not want to hear about rights or political freedoms".

Khalil Shaheen, a veteran Palestinian analyst and journalist, said Abbas is betting that he can create "momentum" that pressures Bennett into reviving moribund peace talks.

But that strategy could prove "ineffective" because Bennett's ideologically disparate coalition is more focused on its own survival than on peace talks with the Palestinians, Shaheen told AFP.

This "Israeli government has agreed to avoid controversial subjects like the Palestinian question that could tear it up at any moment," he said.