ISL | Kerala Blasters back on top 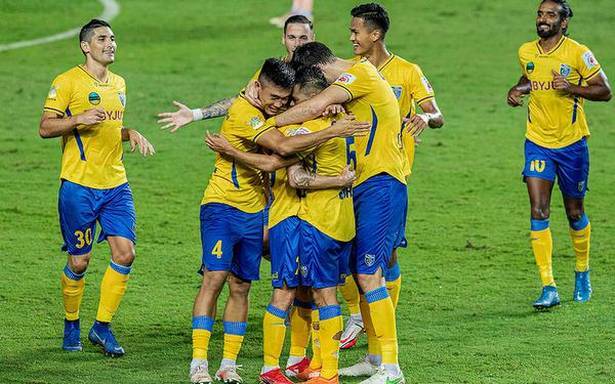 The dream run continues for Kerala Blasters at the ISL.

The men from Kochi defeated Odisha FC 2-0 at Vasco’s Tilak Maidan Stadium on Wednesday night to extend their unbeaten streak to 10. And they are back at the top of the table, too.

They have 20 points from 11 games, one more than Jamshedpur, whose stay at the top proved as short as it possibly could be. Odisha remains eighth with 13 points from 10 matches.

On a night when the Blasters stars stayed away from the scorers’ list, Nishu Kumar and Harmanjot Khabra struck to ensure their team got three points, though the primary roles assigned to them were away from the frontline.

If Blasters could record a comfortable victory even when the likes of Alvaro Vazquez, Jorge Pereyra Diaz, Sahal Samad and Adrian Luna do not score, that shows the kind of confidence and depth of this team this season.

This match was decided in the opening half, in which both the sides had begun a bit cagily.

But once Blasters took the lead in the 28th minute, with Nishu angling his powerful right-footer beautifully off a fine ball from Luna into the box, the passes and the flow was back. It was then a struggle for Odisha to minimise the damage till the half-time whistle.

It had to concede one more goal, though. That too was set up by Luna, the Uruguayan midfielder who has been controlling the game for Blasters in admirable fashion this season.

His corner-kick was headed past the Odisha custodian Arshdeep Singh by Khabra.

In the second half, the Odisha men did create some chances, but there was no comeback for them on this night, like in their last match, against defending champion Mumbai City.