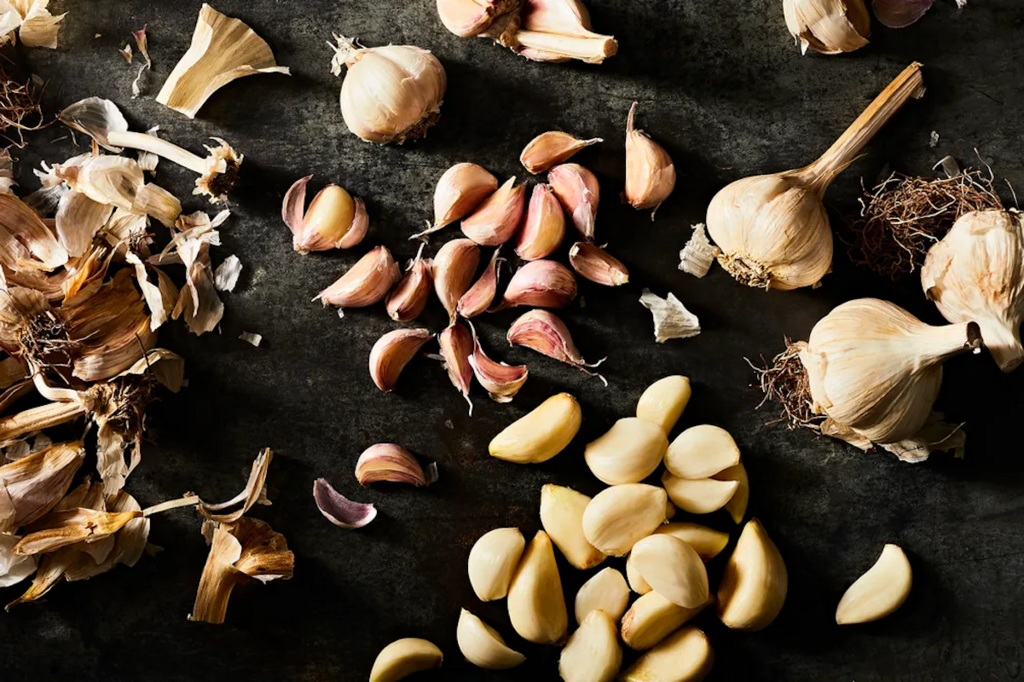 No matter what article or recipe we've just pushed live on the site or promoted through email or on Instagram and Facebook, there is one page on Food52 that is almost constantly in the list of ten URLs with the most real-time viewers.

It's from nine years ago and it's entirely unedited.

So what's the answer?

Well, it's not cut and dry: It depends on how finely minced the garlic is, and even if the chop is standardized, clove size may vary. For ChefOno,

"clove" [is] a useless measurement. Look at the variation on this page — anywhere from 1/4 teaspoon to 1 tablespoon — that's a variation of 1200 percent. I use the conversion of one clove equals one teaspoon. I believe Cook's Illustrated does the same.

What's more interesting than the non-answer answer (one clove is equal to one teaspoon . . . kind of, sometimes, maybe . . . but in the, it end all depends on your taste, anyway: vampires versus garlic fiends) is the judgment that is scattered throughout the thread. Fortunately for Food52 readers, you'll find that across the board, our recipes measure garlic based on the amount of cloves and heads needed, not teaspoons or tablespoons.

Take the answer that's been "voted the best" as an example: "Answer" would be a generous term, actually. It's more like a withholding of information:

Sorry, I would toss the "packaged" garlic that has chemical preservatives in it in favor of spending the 20 seconds it takes to chop or mince fresh real garlic cloves.

But riding alongside this judgment is a rebuttal:

It's quite a bit longer than 20 seconds and if it's ORGANIC garlic then there aren't any preservatives.

This opened up a whole new can of worms (err jarred garlic) that got away from the discussion of whether or not a jar of minced garlic is an acceptable substitute for fresh garlic.

Is pre-minced garlic that bad?

We've established that pre-minced garlic saves time. That is an unequivocal fact. But what about the flavor — is the flavor of pre-minced jarred garlic worse than a fresh clove of garlic? Food52 staff writer Kelly Vaughan thinks yes: "There are plenty of dishes that are garlic heavy (think: pot roast or chicken with 40 cloves of garlic), but for the most part garlic is an aromatic, a flavor-enhancer meant to carry canned San Marzano tomatoes, brighten basil, and offset the sweetness in a brown sauce for stir-fry. When you open a jar of minced garlic, take a whiff. It smells like the contents have already gone bad. The aroma of tiny bits of garlic floating in a bath of garlic juice (if there is such a thing) is overpowering, off-putting, and personally offensive."

The previous arguments were just the most visible squabble. One commenter wrote, "You will never get the flavor of fresh garlic from a jar, so, there is no equivalent." But then we have another Food52er in New Zealand who explained that she uses pre-minced garlic because fresh garlic is so expensive where she lives (and because she likes to add a lot).

Misuse of garlic is a crime. Old garlic, burnt garlic, garlic cut too long ago, garlic that has been smashed through one of those abominations, the garlic press, are all disgusting. [...] Avoid at all costs that vile spew you see rotting in oil in screw-top jars. Too lazy to peel fresh? You don't deserve to eat garlic.

Do we care so much about garlic, in particular, because it's the flavor basis of many dishes, so that taking a shortcut at the foundation means unstable architecture later on? Or is it because chopping garlic is one of the most menial, least pleasurable, smelliest of tasks, and a refusal to do so indicates a resistance to work for our food? Or is it because a failure to appreciate the difference between freshly-chopped and factory-chopped garlic is emblematic of a greater failure to discern between "good" food and "bad" food in general?

The pre-minced garlic shortcut seems more offensive than canned beans (perhaps because dried beans take so long to cook). But what about store-bought pie dough: Is that more or less egregious than a jar of garlic? Considering that pie dough is hard to get right whereas chopping garlic is hard to get wrong, the premade crust would probably be less snubbed. For me, personally, I'd rather cut butter into flour than chop 3 cloves. So, where do we draw the shortcut line?

I also couldn't help but wonder about the millions of people who did have the same question as Sean,Murray, the Food52 user who originally asked. Isn't it possible that many were, let's say, following recipes that called for three or four teaspoons minced garlic and questioning if they'd have to run out to the store to buy another head or if the one clove would do? Maybe most of the curious minds weren't reaching into jars at all.

Or maybe they were. Is it a sin? (We're not asking you, Bourdain.) I'd certainly go for the jar or the press if I wanted to make a double-batch of Braised Chicken Thighs with Tomato and Garlic (12 cloves) or Chilled English Pea Soup with Garlic Cream (two heads).

As rldougherty put it, "Yes, fresh garlic is best.  Applause to anyone that is trying to be a better home chef, no matter what kind of garlic you are using."

Here's what food scientist J. Kenji López-Alt has to say: Prechopped garlic, garlic pasta, garlic juice, and other convenience products of their ilk should be roundly rejected. Just as with onions, the aromatic compounds in garlic are formed through an enzymatic chemical reaction that occurs as soon as its cells are ruptured. So, to maximize garlic flavor, you need to cut it just before incorporating it into a dish. Precut garlic has none of the complexity and freshness of whole garlic cloves," he writes in his tome, The Food Lab. As for garlic powder? He's against that as a substitute for the fresh stuff too.

I'd have to agree.

However, if you want to save time, here's what I think is the happy medium: chop garlic (fresh! whole! cloves!) in a food processor. It will break up the cloves of garlic into hundreds of tiny allium bits, saving you from what many seem to think is the hassle of chopping whole cloves on a cutting board.

There is something therapeutic, and certainly alluring, about peeling and cutting garlic. Some may call it smelly, but I think it's that the papery skin will inevitably stick to your fingers and your hands will smell like garlic for days. But that's part of the beauty of home cooking and I will continue to defend garlic in its whole, unadulterated form.

1. Pot Roast with 40 Cloves of Garlic

Not for the faint of heart (though we hear garlic has cardiovascular benefits!) — both because of the big, bold, garlic flavor, and because, yes, you really have to peel all 40 cloves. But it's well worth it for the melt-in-your-mouth meat and perfectly seasoned, super-silky vegetables that result.

Is it the tender, shreddable lamb belly that makes us love this dish so much? Or the creamy, plump, flavor-packed beans swimming in lamby broth? Nope — it's the hit of grated garlic that showers the earthy, slightly bitter greens accompanying both components. It brings some much-needed brightness and sharpness to the party.

Garlic and ginger bolster and heighten otherwise mellow poultry broth, also seasoning the game hen meat from the outside in. A flourish of fried shallots gives some crunch to the whole affair, but doesn't overpower the aromatic undertones of the soup.

You know and love classic shrimp scampi, with all its buttery, garlicky, lemony charms. But have you ever tried it with umami-rich mushrooms and creamy white beans? If not, we highly recommend it.

Garlic, butter, herbes de Provence, Dijon mustard, and, yes, heavy cream, make for a delightful sauce you'll want to eat by the spoonful. Pro tip: Make a double batch of the sauce and slather it on anything and everything beyond just chicken — steamed green beans or asparagus, crusty bread, a baked potato, for starters.

If you have Greek yogurt, garlic, and salt and pepper, you have your new favorite partner for chips. Seriously! It'll remind you of the beloved party fodder, French onion dip, but with a lot more personality and pizzazz. One reader raved: "Lovely, simple and much more than the sum of its parts. Got gobbled up greedily." Can we come next time there's dip for gobbling?!