Number One has a secret. In episode 3 of Star Trek: Strange New Worlds — “Ghost of Illyria” — Una Chin-Riley (Rebecca Romijn) reveals that she’s a member of a genetically modified group called the Illyrians. While this information is a shock to Captain Pike and the crew, hardcore Trek fans have known since 1989. But which Illyrians are we talking about? Inverse checked in with Bill Wolkoff, who co-wrote “Ghosts of Illyria” alongside Akela Cooper, for all the details about Number One, the new Illyrians, and the other Illyrians who appeared back in 2004. Spoilers ahead.

Is Number One an alien?

Although Una’s Discovery appearance suggested she was human, what we learn in “Ghosts of Illyria” is that she’s been hiding the fact she’s genetically modified, and a secret member of the Illyrians. But what is an Illyrian?

“Una is not human,” Bill Wolkoff tells Inverse. “She just looks human. Illyrians are an alien species. In Una’s case, she’s an Illyrian who passes as a human... She’s forced to hide that part of her identity, a part of herself.”

In the episode, we learn there are several different Illyrian colonies scattered throughout the galaxy, which makes the exact colony that Una is from still a mystery. Will that mystery be solved? Speaking to Wil Wheaton on the official Star Trek after-show, The Ready Room, Rebecca Romjin said that this storyline will continue to “play out in a pretty intense way.”

“Here’s what we know,” Wolkoff says. “After she glowed, Una researched records of Illyrian genetic modifications related to disease control, specifically files relating to the ‘original settlement’ on the Vaultera Nebula. She later told Captain Pike she is from an Illyrian colony far away. Take from that what you will.”

The origin of Illyrians

In 2017 — before Una was confirmed for Discovery Season 2 — the character was described as being an Illyrian in the first-ever tie-in Discovery novel, Desperate Hours by David Mack. But this wasn’t the first time Number One had been classified as part of the elusive Trek species. As Wolkoff confirms, the inspiration comes from even deeper Trek lore.

“Vulcan’s Glory is the novel we talked about,” Wolkoff says. This 1989 book, which details Spock’s first mission with Captain Pike and Una, was written by one of the most influential writers on The Original Series, “the great D.C. Fontana.”

The notion that Illyrians are “an alien species that genetically modifies themselves,” wasn’t wholly invented by the Strange New Worlds writing team either. The 2015 Greg Cox novel Child of Two Worlds suggested that the Illyrians practiced selective breeding, which could be interpreted as genetic engineering. “It puts them at odds with Starfleet, an institution with anti-genetic alteration laws that dates back to the Eugenics Wars,” Wolkoff explains. “We thought that was a rich place to draw from to tell her big story.”

Although “Ghosts of Illyria” finally reconciles Una’s backstory with Star Trek books of the past, a species called Illyrians did appear in a 2004 episode of the prequel series Enterprise. “Damage” was set in 2154, putting it 105 years before the events of Strange New Worlds. The Illyrians in “Damage” are neither human-looking like Una, nor are they the genetically modified fire ghosts who save Pike and Spock in “Ghosts of Illyria.”

So what’s the deal? Are the Illyrians in Enterprise — the people with bumpy foreheads — the same Illyrians from Strange New Worlds? The short answer is yes. Here’s how Wolkoff says it all works:

“I think that’s consistent with what happened in the episode. There is another scene where Una researched potential Illyrian modifications, and on the viewscreen we caught a glimpse of what some of those look like. I saw one Illyrian with webbed hands and feet, another with spiky eyebrows… I’d certainly believe Illyrians could have bumpy foreheads too! And if Una had researched long enough, she might have found a file on those Illyrians.”

So there you have it. An Illyrian can look like Rebecca Romijn. An Illyrian can have webbed hands. An Illyrian can turn into a fire ghost or have a bumpy forehead. As Una tells La’an, the Illyrians genetically modify themselves to adapt to the environments of specific planets. Which means the next time a Trek alien seems to be perfect for their planet, it’s possible it could be an Illyrian. 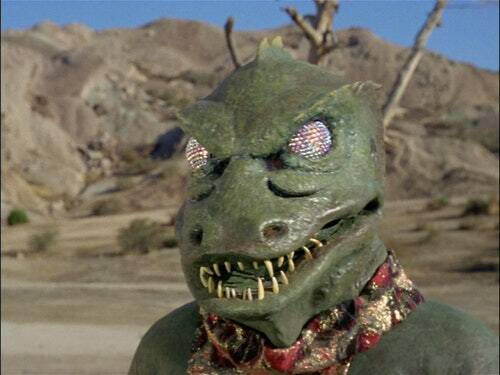 Star Trek writer explains a big Gorn canon twist in 'Strange New Worlds'
Your favorite lizard people are back. Or are they? Here's how the Gorn have changed for 'Star Trek: Strange New…

Spooked Scotland is set to premiere on UK TV this Friday, and Evelyn Hollow is explaining more about what is…