Is grip strength important for weight lifting? 3 facts you need to know 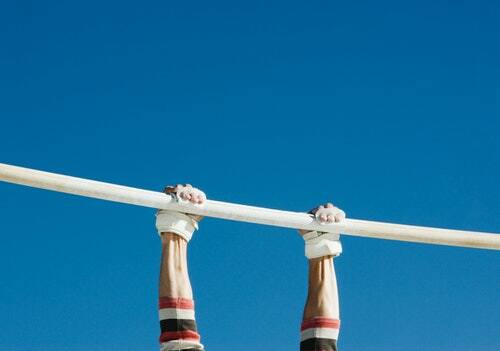 In just about every single strength training exercise, hands are involved — even when they’re not.

From curls to compound movements — the squats and deadlifts that don’t target our mitts specifically — how we grip the barbell is how we meet it. Grip, at the gym, is the tip of the iceberg.

And just like weak feet can hold an otherwise strong athlete back, so can bad grip. A weight that can’t be held can’t be lifted. But what more can grip tell us about strength and health?

Quite a bit. Improving it doesn’t just make you a better lifter — it makes you a healthier person. Numerous studies have shown grip strength acts as a bellwether for health: the stronger it is, the more healthy you’re likely to be.

Grip is a function of strength in the hand, which is made up of muscles, tendons, and finger pulleys. When we tighten and flex our hands, we exercise our grip.

Grip strength is critical inside and outside the gym. A study covering geriatric women showed a positive relationship between grip strength and pulmonary functioning — how well the lungs work — as did a study that focused on adults living in the United Kingdom. Another which focused on adolescents revealed grip strength as a positive marker of future health. Inversely, a weak grip is associated with developing carpal tunnel.

Good grip doesn’t just happen. People with firm handshakes or who can hang from a chin-up bar for the length of a Megadeth song have these abilities because they’ve worked to get there, and because of good neuro-spatial connections between their brains and their fists.

Flexing your hand tightly and with force means both the presence of muscle — and that your neural pathways are healthy enough to make your muscles take direction and do things your brain wants them to do.

The grip is the most outward example of force production: When we want to show force, we make a fist. It’s the most standard way we express our strength — not even the biggest gym rat has squatted more in a lifetime than they’ve made fists.

But even though making a fist is instinctive, it’s also mentally taxing: it fires off neurons between our brains and our bodies, which makes it feel like we’re exerting ourselves. (Try holding a fist and bracing your core for 30 seconds — no one’s calm when they’re punching.)

This effort is one reason why grip can let out early in a lift. Luckily, training can help.

How to improve your grip

Grip gets built up, like so much else in the body, through repetition and work. And while tendons and finger pulleys need longer recovery times than muscles, and shouldn’t be worked every day, they can still be pushed.

Traditional strength training can help. The compound lifts that strengthen the body also require tension, which means that force production is exerted through a grip on the bar.

Squats are the best example: to perform one correctly, a lifter will squeeze the bar pretty hard as they make their body rigid while sitting up and down with the weight. That squeeze of force expression carries over into a strong grip: If you squat on the regular, you’ll have a good handshake.

But while the standard lifts can build up grip to respectable levels, they can’t always build grip up at the same rate that muscle gets put on the body.

Heavy deadlifts, for example, build grip up incidentally while exposing it. The hands get strong on a deadlift, but posterior chain muscles get stronger, and so when weights get real heavy, lifters tend to lose the bar with their fingers. Many lifters pull limit deadlifts with straps — ties that go between the hand and the bar — to ensure weak hands don’t get in the way of a good workout.

But sometimes we need to lift without straps. And so to catch grip up to the rest of the body, specialized work is needed.

Grip work in the gym

When we think of direct grip work, we picture grippers — the hand-squeezers your dad might have had at his desk — which, to be sure, are good at-home options. But grip-focused specific programs, like David Horne’s beginner routine or this Reddit one that focuses solely on deadlift improvement, are actually made up of barbell and dumbbell exercises that target hands and wrists and carry over well to barbell programs.

Plenty of exercises can be added after a workout as assistance work to catch hands up to the body.

A few stand out. Loaded carries — walking your groceries home, but with plates, in the gym — work the hands, core, and forearms, and improve conditioning.

Plate pinches — standing, pinching one big plate or some small ones between your fingers — isolate the hands slightly more.

Timed holds might be the best ones. They’re simple: the barbell is held in the down position, for maybe a minute, building up hand strength, wrist strength, and stamina. Because it’s done with a barbell, there’s an immediate carryover to the deadlift and squat. Ed Coan, arguably the best powerlifter ever, swore by the one-handed variety. If they’re good enough for Coan, they’re good enough for you.

Special equipment can also get added in and should. Rotating deadlift handles — when hooked up to a loading pin, a clip, and weights — offer a one-armed deadlift variant that shoots grip through the roof by forcing the whole body into the lift through one hand. (The Rolling Thunder is a good option.)

Fat bars — what they sound like, added onto a barbell or dumbbell, which turns it into an axle bar — are also popular. They force lifts to be completed with open palms. This involves different muscles and requires more concentration and force production. Picture your hand crushing a clementine versus a grapefruit.

Ultimately, concentration is key, and the focus we place on grip might help make us stronger.

It all ties back to the muscular-neural pathway. A good grip, according to kettlebell impresario Pavel Tsatsouline, spills the tension from the fist down to the rest of the muscles. In his words, it “irradiates” the body.

Tsatsouline is such a believer in grip strength that he recommends training it, along with the core, over any other program. He recommends RKC planks — where a plank is held, and the whole body is flexed, for a max of 15 seconds — as a way to turn on that irradiation. Other trainers recommend squeezing something with a free hand while making a lift. The idea creates a situation that’s been expressed in Kung Fu for centuries. Neurons turn on, and the whole body becomes a fist.

It’s an idea in strength training that gets a little bit less press than heavy squats or deadlifts. But it makes sense. We control our hands more easily than we do any other part of our body. So why not let that proprioception trickle down?

When we begin controlling our muscles like our hands, that’s when real strength begins. And who doesn’t want that?

LEG DAY OBSERVER is an exploratory look at fitness, the companion to GQ.com’s Snake America vintage column, and a home for all things Leg Day. Due to the complicated nature of the human body, these columns are meant to be taken as introductory prompts for further research and not as directives. Read past editions of Leg Day Observer for more thoughtful approaches to lifting and eating.