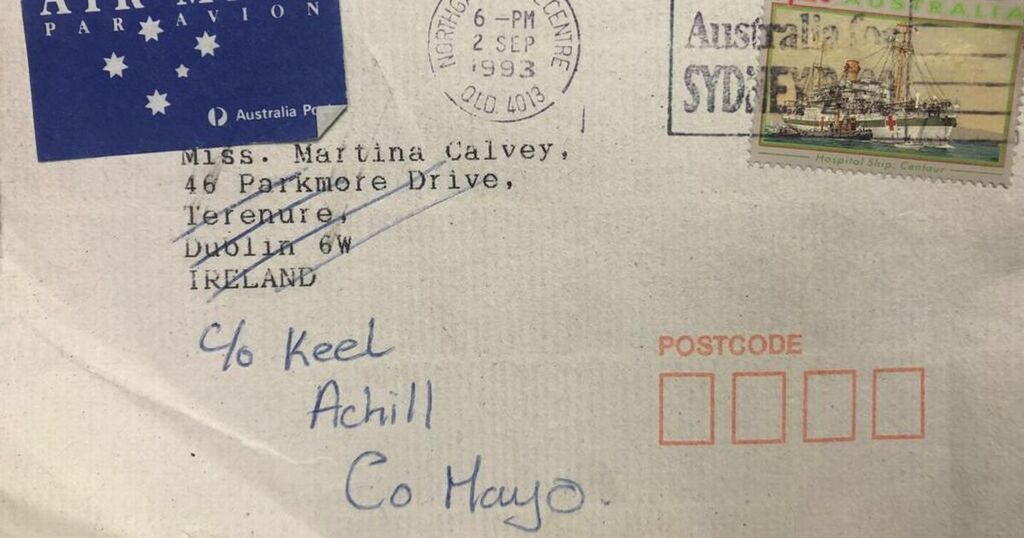 A woman who lives on Achill Island was shocked when she received a 30-year-old letter in the post.

Martina Calvey, who lives in Keel, couldn’t believe her eyes when the post from Australia wound up in her letterbox and was even more surprised when she found a very special family photo inside.

She explained: “The postman delivered the post and when I went through it and there was this envelope that looked like it was from the last century.

“The address was typed like with an old fashioned typewriter.

“I had just got it, I don’t know where it’s been but it arrived into our family home [on Thursday].

“I thought initially that it was just a postcard from my cousin in Australia.

“I’ve been in contact with her today and told her what had arrived.

“She could remember sending me the photograph in the letter, but she never knew I didn’t get it!

And the photo has brought back memories for Martina, whose late grandmother is in the photo, as well as her hard-working dad.

The picture, which is from the 70s, shows her dad, her cousin John James, her brother Ed and granny Grace, her late brother Edward and Susan, who was visiting from down under.

Speaking on Drivetime on RTE today, she continued: “My dad is going to be 80 on Sunday and he is still working as hard as he did the day this picture was taken.

“I felt sad, my late grandmother is in it, Granny Grace, and she was such an inspiration.

“I was quite young when she died unfortunatley and I still had so much I could learn from her.

“But it’s just magic, the picture.

“I feel if we were to tell our life story in one picture, this is the picture.

“It’s a reminder of the early 90s, I lived in Dublin and I loved my life and it just brought back those emotions today.”