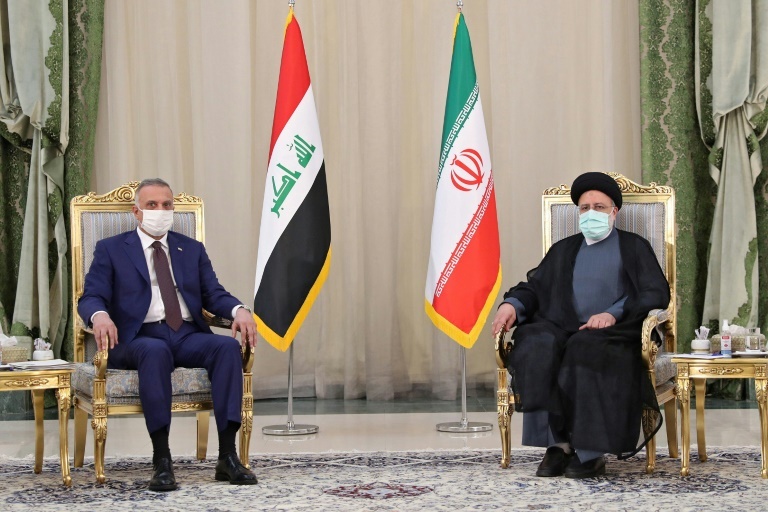 Kadhemi is the first foreign leader to visit the ultra-conservative Raisi, and he brought along a "high level political and economic delegation", Iran's official IRNA news agency said.

Kadhemi told joint news conference that the pair "discussed certain joint economic questions and strategic projects" as well as "increasing trade in the interests of both nations".

As Iran's neighbour to the west, Iraq has sought a mediating role between Tehran and Arab nations.

It has tried to broker Iran-Saudi talks to soothe tensions between the regional rivals.

Iranian and Saudi officials met in Baghdad in April, their first high-level meeting since Riyadh cut diplomatic ties with Tehran in 2016.

An Iraqi source had said Friday that Kadhemi would raise energy cooperation and Iranian-Saudi relations in Tehran.

Other hot topics include Iraq's six-billion-dollar debt to Iran, after shortages pushed it to turn to its neighbour to cover one-third of its gas and electricity needs.

This summer Iran suspended exports for several days over the outstanding amount.

Baghdad would "increase as much as possible" the number able to participate in the Arbaeen pilgrimage in the Shiite shrine city of Karbala later this month, the Iranian leader added.

Kadhemi's office had last week announced up to 60,000 Iranians would be able to come.

Arbaeen marks the end of the 40-day mourning period for the killing of Imam Hussein, grandson of the Prophet Mohammed, by the forces of the caliph Yazid in 680 AD.

The number of visas issued to foreign pilgrims permitted has dropped sharply in the past two years due to the coronavirus pandemic.