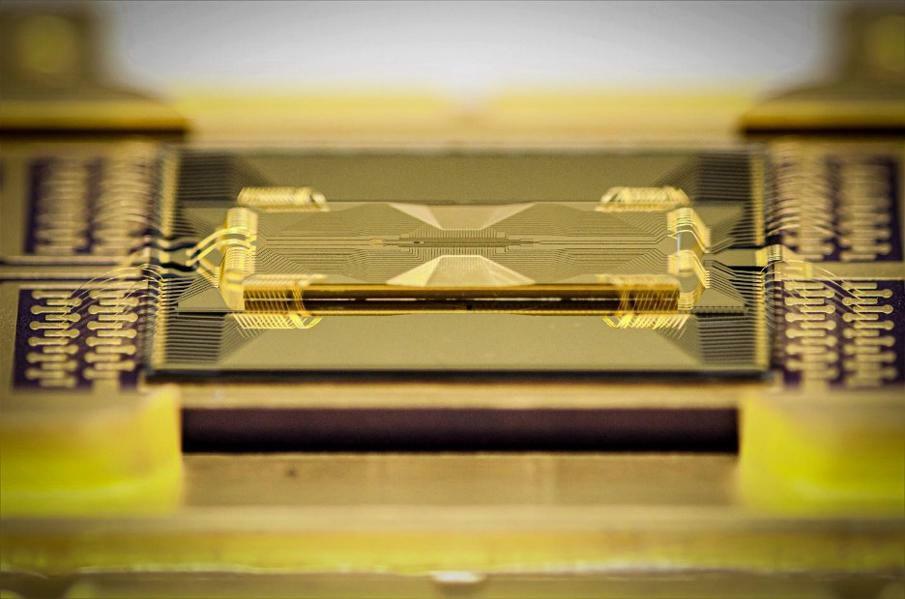 IonQ beat its technology roadmap projection by more than a year by demonstrating its ReconfigurableMulticore Quantum Architecture (RMQA). This technology should eventually allow IonQ to begin scaling large numbers of qubits. Moreover, IonQ has also delivered another chip technology ahead of schedule - RMQA will be implemented on a new quantum chip platform called Evaporated Glass Traps (EGTs).

Many technologies are used for quantum computers, such as superconductors, photonics, silicon-based, neutral atoms, trapped ions, and several others. IonQ’s present quantum technology of choice is natural ions created from an isotope of a rare-earth metal called ytterbium.

Just as classical computers use bits for computation, quantum computers use quantum bits or “qubits.” Ion qubits are created using precision lasers to remove an outer electron from an atom of ytterbium, which creates a positively charged ion whose internal workings act as a qubit.  Once positioned in the trap, oscillating voltage fields hold the ions in place. This, and other laser manipulations of the ions, are all done inside a small vacuum chamber.

Presently, IonQ uses a single linear ion trap containing up to 32 ion qubits. This trap's number of ion qubits may top out at about 50 to 60 qubits in a single chain of ions in the next 12-15 months.  At that point, I expect IonQ to replace its linear trap with a new quantum processing unit that uses the RMQA and EGT trap. I previously wrote in Forbes about IonQ’s evolution to the new trap here.

This announcement was not paired with a supporting academic paper, but that is expected to come later.  Dr. Robert Niffenegger, Assistant Professor Electrical and Computer Engineering at University of Massachusetts Amherst, said, “Certainly the new chip is impressive but without performance data... it is hard to determine how big of a step they’ve made.”

IonQ’s recent demonstration involved RMQA using 4 chains of 16 ions in an EGT Series ion trap chip. These ion chains were transported and merged into combinations of a higher-connectivity, 32-ion quantum computing core. The EGT series chips are expected to support more chains. Each chain will increase the quantum computational power by a factor of 4000 or more. The following IonQ video demonstrates the process:

Why having more qubits is important

So, why are IonQ and other quantum computer companies so interested in increasing the number of qubits?

Quantum scientists have made amazing progress over the past two decades. However, for quantum machines to solve world-class problems, improvements are needed in three areas: error correction, gate fidelity, and qubit count. All three factors are interrelated and IonQ has researchers dedicated to all of them. Its researchers have made steady progress on both error correction and qubit fidelity which should allow incremental qubit scaling according to IonQ’s published roadmap. Unlike a classical computer that increases its power linearly with bits, a quantum computer doubles its power each time a qubit is added.  For instance, a quantum computer with 16 qubits is 4,000 times more powerful than one with 4 qubits. Intuitively, it would seem like four times as many qubits would result in a quantum computer with four times as much power. That is true of classical computers, but a quantum computer increases its power exponentially with each additional qubit. That is why it only takes a few qubits to significantly increase the power of a quantum computer.

IonQ scientists believe that a quantum computer can eventually solve many problems beyond the computational capability of today’s supercomputers with as little as 72 error-corrected qubits, which is expected to take about 1,000 ion qubits in IonQ’s systems.  Compared to IonQ’s existing 32 trapped ion computer, a 72 qubit machine would be about 1 trillion times more powerful.

If IonQ is correct, and if error correction can be solved, then an EGT trapped-ion chip containing a triple digit number of qubits will be an extremely powerful quantum machine capable of solving many significant problems.

Note: Moor Insights & Strategy writers and editors may have contributed to this article.