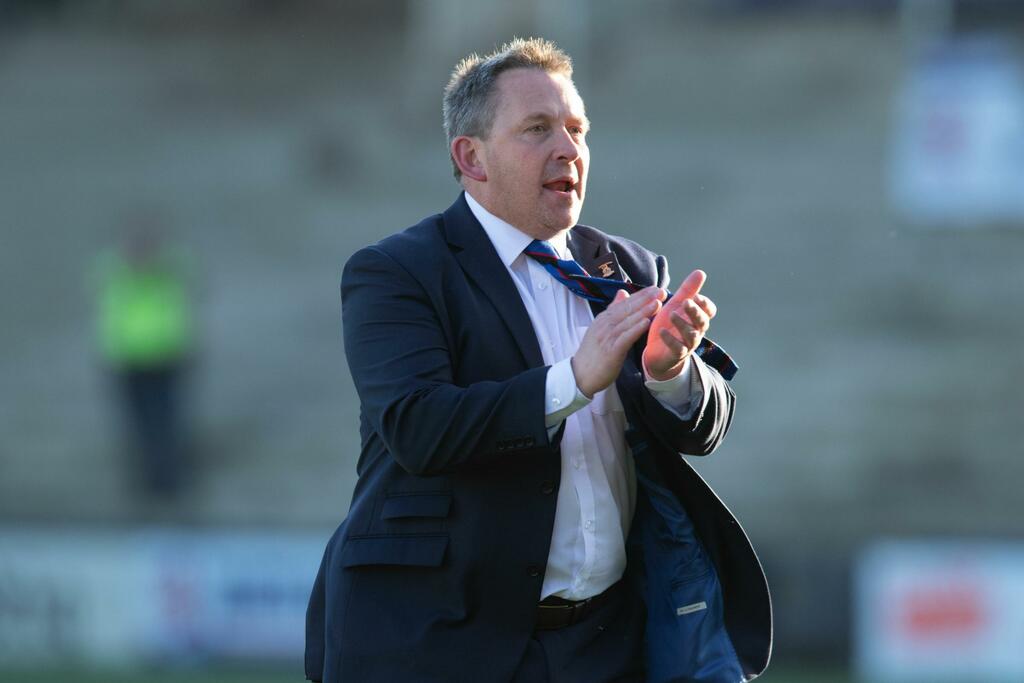 RANGERS showed that the future is bright with a 3-1 win over third-placed Hearts at Tynecastle. Goals from Cedric Itten…

Mark Ridgers was the hero as his shootout save settled a nerve-shredding play-off semi final and sent Inverness to within 180 minutes of a Premiership return.

On a night when Billy Dodds’ side had to dig deep into their reserves after being reduced to nine men by a ridiculously card-happy Willie Collum, Ridgers dived to his right to deny Arbroath stalwart Bobby Linn.

It teed up veteran Kirk Broadfoot to slam home the final penalty and set up a home and away showdown with St Johnstone as they look to end their five-year top flight exile.

It was heartbreaking for Lichties legend Linn, in his ninth season with the club, and it was harsh on Arbroath who finished six points clear of Inverness in the regular Championship standings.

But Billy Dodds had challenged his side to ignore the script as they headed to Gayfield with what seemed like every neutral in Scotland behind Dick Campbell’s part-time shocktroops and their fairytale run.

And they did just that with a backs-to-the-wall masterclass. It was far from pretty. It was tense, edgy, brutal at times and the match ball would have been deserving of a heavy dose of paracetamol.

Dodds and his players won’t be giving a damn as they head into the final.

They had to overcome two shocking decisions from Collum too as Danny Devine was harshly red carded after 65 minutes and then sub Wallace Duffy followed on 113 minutes, again with the whistler getting the decision wrong.

Gayfield was rammed to near capacity with around 600 travelling fans making the 300-mile round trip in the 5154 crowd. And how they partied after watching their heroes dig out a result at a venue where Arbroath had only lost once in the league all season - ironically to Inverness on the opening day way back in July.

Since then the two sides finished highest scorers in the second tier during the regular season - yet couldn’t conjure up a goal between them in 210 play-off minutes.

The infamous Gayfield wind machine was at a moderate level, enough to make a fool of any Inverness defender trying to clear their lines and keep the ball in the park.

The ball might have been looking to make an escape to be fair, as the half was all punt and grunt, 100 mph stuff with neither side really getting anywhere.

Second balls and set pieces were order of the day for Arbroath and off two scraps Scott Stewart and Jack Hamilton both had fizzing efforts from outside the box blocked en-route to goal.

At the other end it took until the 30th minute for Derek Gaston to get involved in the action as Caley’s attempts to get Austin Samuels in behind were thwarted by Ricky Little, Tam O’Brien. And the wind.

Quarter final goal hero Samuels finally found space on the left with a minute of the half remaining and tried to surprise Gaston at his near post from the acutest of angles but the keeper was alert.

It was Samuels’ last action as he was hooked for Billy Mckay at the interval.

Arbroath though served first notice moments after the restart as Jack Hamilton broke wide and fired a dangerous low cross right across the face of goal but with no takers.

Suddenly the game burst to life and at the other end Shane Sutherland had the clearest sight of goal of the evening after 51 minutes when he nicked the ball past Little and homed in on Gaston’s goal only to see his left footed effort bulge the wrong side of the net.

Gaston was taking pelters from the Caley Jags behind his goal. One muppet even decided to throw a cup of hot drink in his direction but the keeper took it in his stride before the stewards stepped in.

But they were dealt a massive hand by Willie Collum in the 65th minute.

Devine clashed with Hamilton as the pair contested a harmless ball lofted into the channel and after the pair hit the deck, Collum wasted no time in pulling out the red card.

It looked harsh as the Inverness man may have been last man but never took his eyes off the ball dropping out the sky before the pair collided.

Collum’s mind was made up though and he followed-up with a second red flashed to Dodds’ assistant Scott Kellacher for his furious protests.

Momentum was well and truly with the home side and matters got worse for Inverness when Sutherland collapsed unchallenged as he chased a ball down and had to be stretchered off with what appeared to be a knee injury.

Having stopped the game three times to make subs already Dodds had to watch his side plough on into the final 10 minutes with nine men before he could throw on another replacement for extra time.

They made it through aswell thanks to some heroic penalty box defending. Sub Joe Hardy even nearly nicked it with a superb solo run that ended with him shooting over.

Dodds finally got to make his final sub as the game went into extra time with Lewis Hyde replacing the long-departed Sutherland.

But Arbroath should have stormed into the lead when Jack Hamilton burst through on Ridgers only to see the big keeper save brilliantly with his legs.

Colin Hamilton was next to have a go when his header from Low’s cross flew just wide.

Inverness were digging deep but their job got even tougher with seven minutes to go when sub Wallace Duffy received his second yellow for a sliding challenge on Bobby Linn - again it looked harsh with the Inverness man appearing to take the ball first.

Colin Hamilton hit the bar with another header as the clock ticked down but Inverness held on for spot kicks.

But Linn’s fourth spot kick was saved by Ridgers allowing Broadfoot to fire home the winner.

RANGERS showed that the future is bright with a 3-1 win over third-placed Hearts at Tynecastle. Goals from Cedric Itten…