Introducing Marley Morrison: ‘I’ve told you more than anyone in my life for five years’ 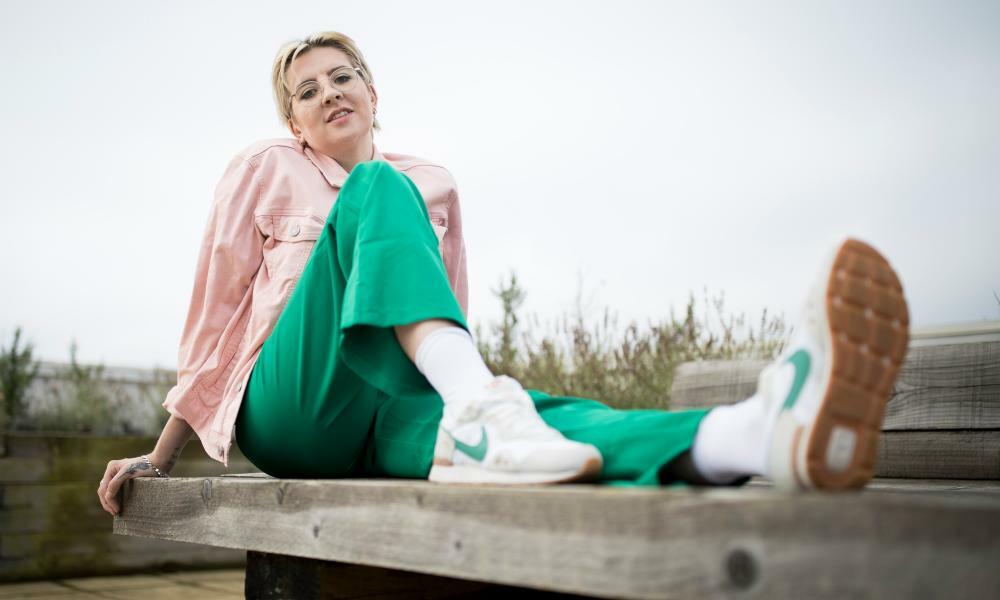 Marley Morrison has written and directed a knockout first feature – the witty, spiky queer romance Sweetheart – but when she rocks up to the back terrace of a London cafe, her appearance doesn’t exactly scream “film-maker”. The impish 35-year-old looks more like the coolest cartoon character you ever saw: the love child of Popeye and Tank Girl. Bleached hair peeks out from beneath her pink Barbour cap; shorts and T-shirt leave her intricately cross-hatched tattoos on display. “My partner’s a tattoo artist,” she explains as she sits down, “so I’m a sketch book.” On one arm is Marlene Dietrich; on the other, Jim Carrey and Kate Winslet are snuggled up together in Eternal Sunshine of the Spotless Mind. On her right calf is the Disney warrior Mulan, who in ancient China came to her father’s rescue by dressing as a boy. Hold that thought.

Morrison has glowering eyes, and a Lena Dunham-esque surliness that disappears the second she starts talking about the astonishing reception Sweetheart has had this year on the festival circuit. “I wasn’t expecting this,” she says, sounding dazed. “I just hoped it might resonate with a few people.” The picture won the audience award at the Glasgow film festival, as well as being named best first feature at the Inside Out festival in Toronto, while its star, the miraculous newcomer Nell Barlow, took home the best performance prize at Outfest in Los Angeles. Morrison herself is suddenly in demand: she has just made an ad campaign for Microsoft and will direct episodes of a new ITV2 teen drama before she moves on to her next film.

But then Sweetheart is the sort of movie that will win friends and impress people wherever it plays. Barlow stars as AJ, a 17-year-old sulk whose rose-tinted sunglasses belie her tendency to, as Morrison puts it, “always look for grey clouds”. Dragged along by her mother and sisters to a gaudy Dorset holiday park, AJ is determined not to enjoy herself. But she has reckoned without Isla (Ella-Rae Smith), who works there as a lifeguard and gives her no choice but to have a good time.

Queer stories are typically predicated on difficulty: homophobia, coming out, falling for straight people. There is little of that here. AJ is already out to her family, while Isla is not merely approachable but apparently attainable. “I wanted her to be this absolute ray of sunshine that’s impossible for AJ to ignore,” Morrison says. “A lot of the time, being young and queer can be such a lonely place. You’re always wondering: is that person gay or not? But I’m saying to young gay girls: what if the people you fancy are not running away from you?”

AJ’s mother (Jo Hartley) seems broadly fine with her daughter’s sexuality, if not her appearance: “Just because you’re a lesbian now, it doesn’t mean you have to dress like a boy,” she tells her. Morrison’s mother made a similar comment recently. “It was the first thing she said to me when she opened the front door: ‘Why do you look like a teenage boy?’” Her look has changed radically over the years. “At one point, I was like a Barbie doll: straight bleached blonde hair down my back, super-girly. At other times, I looked like … ” She thinks for a second. “You! I could show you two pictures of me and you’d think they were different people. I overcompensated a lot, I think, for a lack of femininity by being extra femme, but I never felt comfortable in that space. I’ve done everything. I’ve been through the wringer and round the back and upside down and inside out.”

That is putting it mildly. Several years ago, Morrison was on track to make her debut with an entirely different film she had written. It was to be funded, as Sweetheart eventually was, by Film London’s Microwave scheme, which backs first features to the tune of £100,000. But as the project got nearer to happening, Morrison realised she wasn’t the same person that she had been when she wrote it. “The script was very angry and political, and my own experience had shifted so much. I felt I couldn’t make the film if I didn’t agree with what it was saying.”

She glances away, and strikes an apologetic note. “I feel like I’m not giving you much,” she says. “It’s just that it’s a part of my life that I’ve already dealt with. I went through a process with my gender identity. It affected me massively for a while. I don’t really discuss it any more.” Her hand trembles slightly as she raises her iced latte to her lips; it could be nerves or caffeine. She is referring to transitioning, right? “Mmm-hmm. It was a long process. Going to clinics, going through all that, and then deciding it wasn’t for me. It wasn’t making me feel good about myself. So I had this complete shift, where I thought I was going one way but then I backtracked.” As if to reassure herself, she adds: “And that’s totally fine!”

Changing her mind about that was all bound up with abandoning the film she had intended to make. “The two were intertwined,” she says. “A lot of what I was experiencing with my gender identity was in the previous script. When I got to the point of realising this is not all right, it fucked me up for a while. Then to be dealing at the same time with a film I didn’t believe in … I needed to put that part of my life to bed.” She told Film London she had to figure things out. She went away to Cyprus, asked herself “Where is my head at now?” and wrote Sweetheart. “It came out quite easily. I wanted to do something joyful that the younger me could have watched.”

The adolescent Morrison had few role models available to her. “Growing up, the person I thought most reflected who I was as a teenager was Hilary Swank in Boys Don’t Cry. And we all know what happened in that story.” Indeed: Swank played the real-life transgender male Brandon Teena, who was raped and murdered at 21. “It’s a great film and an important story,” she says. “But for that to be one of the only representations of a trans male or masculine female, I think, was not a good thing for me. I was on the lookout for images of lesbians that weren’t stereotypically feminine and it led me down certain paths.” Did she think she might end up like Brandon? “Yeah. Whatever happened, it could only be bad.”

Morrison was raised in a village near Hemel Hempstead, and began visiting gay clubs – Pink Punters in Bletchley, and Fudge, which was “in the woods” in St Albans – in her teens. “These secret places felt so separate from the rest of society,” she marvels. “Once I moved to London, going to a club was no longer this sordid thing off the beaten track.”

She was a footballer before she was a film-maker, and went to the same school that the Tottenham and England player Harry Winks later attended. It was there that she was scouted by Watford FC Ladies; she also played for Newcastle UFC Ladies. Her father is from Newcastle upon Tyne, she points out. “Really that whole thing was to impress him.” Did it work? “For a while,” she shrugs. “My dad is very hard to impress. That probably affected me a lot when I was younger. I liked football but I liked it because he did. And I grew up watching him play for semi-professional teams.” Playing football and doing so for her father’s home team must have ticked two boxes for him. “I was never a boy, though,” she says. “That would have sold it.”

When did she realise he wanted her to be a boy? “Oh God, we’re getting really deep, aren’t we?” she laughs. “Look, there are three girls and one boy in my family – and three of us are gay. One of my sisters is straight. I think my dad was always happy with me playing football but he just wanted a boy, really. The fact that my brother isn’t into football and isn’t very macho …” She trails off. I ask where her mother fitted into all this. “I was never really aware of what my mum wanted. She works for the NHS and was always at the hospital. I tried for a very long time to please my parents and make them happy with something I was doing.” And are they? “I’ve stopped wondering.”

She mentions in passing that she “left home very early: 15, 16”. When she returns to the subject later in our conversation, though, the age is lower, the language harsher: now she says she was 14, and that she didn’t leave – she was “kicked out”. Was it because of her sexuality? “I would say partly to do with that.” She takes a deep breath. “I feel like I’ve told you more than I’ve told anyone in my life in the past five years. God, we could open Pandora’s box going back there. It really affected me. I had a lot of abandonment issues dealing with it all while I was sleeping on friends’ couches.”

For several years, she struggled with drink, drugs and depression. It was only when she moved to London at the age of 18 (“As you do”) that she started to get her life together. She enrolled on a performing arts course. Later, she began writing her own scripts.

A back injury had curtailed her football career years earlier, but she gravitated toward dance, joining several hip-hop outfits. Her injuries hadn’t gone away, though, and eventually she had to give up that, too. “That was when I picked up a camera,” she says. The resulting shorts, including her 2017 film Leroy, about a queer teenager who gives a dance presentation in lieu of a eulogy at his grandfather’s funeral, were lively and punchy.

In Sweetheart, AJ freaks out when she finally gets what she wants. Is Morrison having the same reaction now that Sweetheart is picking up awards and admirers wherever it goes? “One hundred per cent,” she says. “There’s this endless quest for satisfaction that I don’t think is achievable through making a film or whatever. I have to find it elsewhere. So yeah, there is a lot of panic about having made it. People asking: ‘What’s next?’ Feeling I could’ve done better. Knowing I can.”

Since Sweetheart was conceived with the teenage Morrison in mind, it feels only natural to ask what she might have made of the film. “It would have helped her to see that somebody was going through similar things to her without getting a terrible reaction from people around them,” she says. “That there could be hope and happiness. That she might not end up dead. She might be OK, you know?” More than OK, I’d say.

• Sweetheart is in cinemas on 24 September.