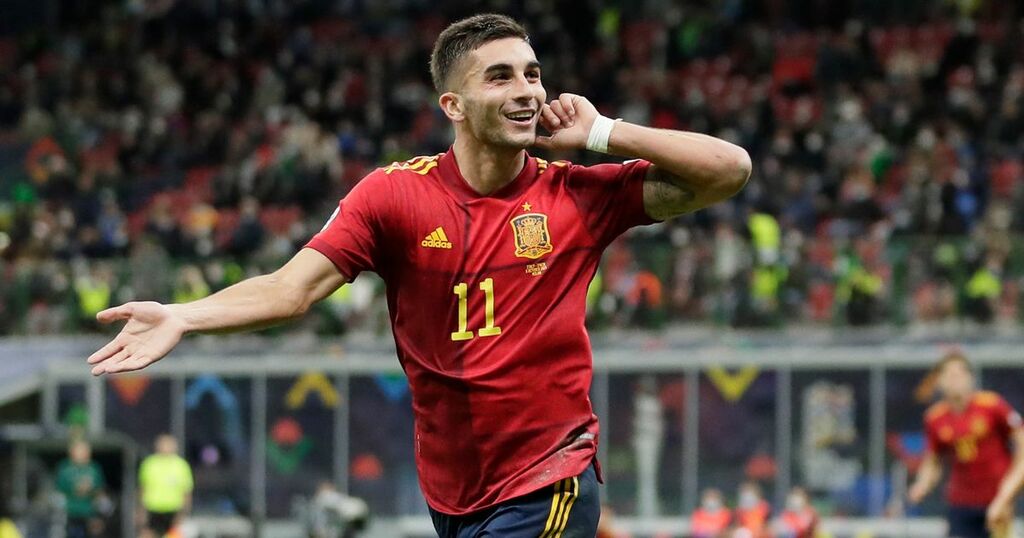 You didn't think the international break would provide respite from the great Manchester City striker debate, did you?

Now through to Sunday's final against France or Belgium, Spain have the chance to win silverware for the first time since 2012. It's fair to say that this was a pretty big game for Ferran to show what he can do, right?

After playing a grand total of zero minutes in City's recent trips to Chelsea, Paris Saint-Germain and Liverpool, Torres' international exploits beg the question: should he be featuring in the big games for Pep Guardiola's side?

One only needs to see the goals the 22-year-old scored on Wednesday to tell that he has the 'smell of goals' that Guardiola desires in a number nine.

Torres' first strike saw him caress a cross with a delicate, glancing touch into the bottom corner of Gianluigi Donnarumma's goal. The run he made into the penalty area, maintaining just enough distance between himself and centre-back Alessandro Bastoni, was textbook number nine play.

While City played brilliantly in their three recent outings, something they missed was runs like that into the box. In the first half of the 2-2 draw against Liverpool, Phil Foden and Bernardo Silva produced a number of dangerous crosses, but there was no one with a striker's instinct making the right run to get on the end of them.

Ferran's second goal, a deft header on the stroke of half-time, showed not just his aerial ability but his intelligence too.

Anticipating the cross to the back post as he neared the six-yard box, the City man got on the blind side of the defender and pulled away while he wasn't looking. By the time Emerson had turned his head, Ferran was unmarked at the back post and rising high to head Spain into a 2-0 lead.

It's that kind of movement that only a great striker can bring to a team.

City will score plenty of goals this season given their vast array of attacking talent, but it's the split-second decisions - when to run, when to stop, when to move - that only natural goalscorers can make which could prove the difference in the tightest of games.

While Ferran made little impact in two high-profile City games this season (away at Tottenham and Leicester in the Premier League), his performance in Milan surely warrants a second chance on the big stage.

That isn't to say that Guardiola should abandon his false-nine system entirely - as we saw at Stamford Bridge and Anfield in particular, it allows City to dominate games by manipulating the opposition. But in those situations where Guardiola decides he needs a striker on the field, he should be turning to Ferran above anyone else.

In Paris, Raheem Sterling started in the centre of the attacking three, yet he played neither as an out-and-out striker or a false nine. He was replaced by Gabriel Jesus once Lionel Messi had put the home side 2-0 up, but arguably it should have been Ferran coming on to try and salvage a result.

In some ways, Ferran's fortunes reflect those of Sterling. Both find it much easier to score for their respective national teams than they do for City (Ferran has scored four goals in his last three Spain appearances and has bagged three in six for City), and both have seemingly lost Guardiola's trust when it comes to the big games.

Ferran's clinical streak for his country should change his manager's mind. If there is one criticism of the Blues this term, like last season, it's that they waste too many chances. Despite dominating the first half against Liverpool, they went into half-time with no goals to show for their efforts.

Of course, Ferran is still young and in many ways is still learning his craft as a striker. But what is encouraging is that with every game he's wasting fewer chances. Against the reigning European champions, who had the Euro 2020 player of the tournament playing in goal, he had two shots - both went in.

Perhaps the clinical number nine that City and Guardiola crave is already in the building.

Do you think that Ferran Torres deserves to get more minutes for City? Follow the City Is Ours writer Alex Brotherton on Twitter to get involved in the discussion and give us your thoughts in the comments section below.