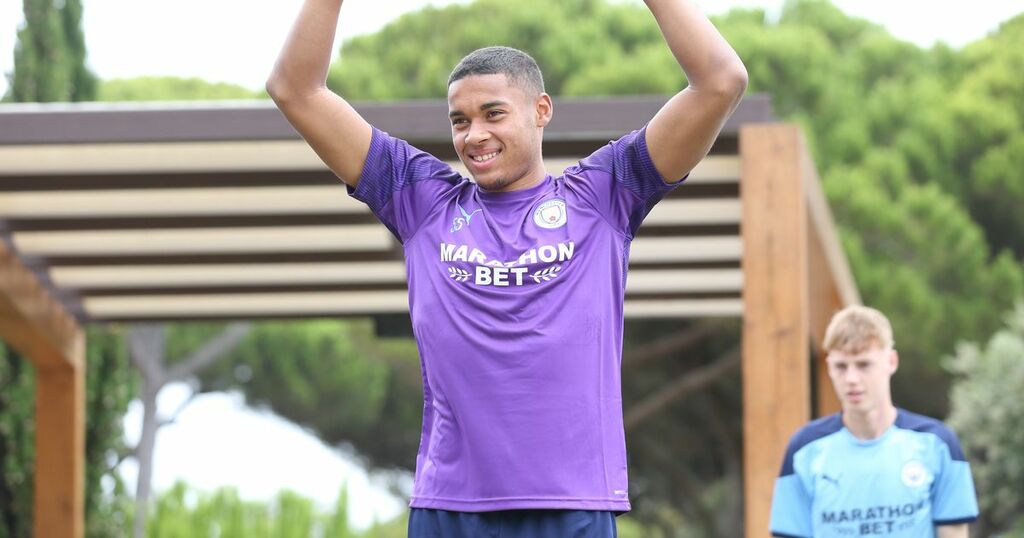 It's been a relatively quiet international break for Manchester City's senior players - and that's just how Pep Guardiola will like it.

There have been goals for Raheem Sterling and Bernardo Silva, much-needed minutes for players like John Stones and Jack Grealish, and others have been able to rest at the CFA.

Injury scares for Aymeric Laporte, Nathan Ake and Zack Steffen aren't ideal, but don't appear to be long-term concerns, so City should be in a better position after the international break than they were going into it.

And then there's the promising performances of two youngsters in particular, who have alerted City fans to their talents - if they didn't already know it.

Cole Palmer's ability has hardly been hidden, as his first team involvement this season shows. When he's dropped down to the academy sides, he's sent reminders of that raw talent with some eye-catching goals.

His England under-21 debut wasn't another senior appearance, but was arguably his highest profile game of his flourishing career so far. In response, he produced a Man of the Match performance and a stunning bit of skill to score for the Young Lions.

Palmer has now been challenged by U21 manager Lee Carsley to get more minutes at City if he wants to keep his place in the team, but that is unlikely to be an issue given his progression in the last year.

His U21 outing does show, however, that City have been justified in keeping Palmer at the club this season rather than send him out on loan. Whether it's for City's under-21s in the EFL Trophy or England's under-21s, or even the City first team, Palmer is ready to take any chance he gets. He isn't showing any signs of missing out on regular senior football at this stage of his career.

Some players have shown that alternative path is exactly what they need.

Take City goalkeeper Gavin Bazunu, who's built on a productive loan at Rochdale last season, has fought his way into the Portsmouth first team and earned the Republic of Ireland number one jersey.

He produced heroics against Cristiano Ronaldo, including from the penalty spot, as it looked like he would deny the new Manchester United signing his record-breaking goals to become the all-time international top goalscorer. Bazunu was helpless as Ronaldo powered in two headers late on to make history.

Undeterred, Bazunu continued his form with a further 13 saves in the next two games for Ireland, taking his tally for the week to 18 saves from 22 shots on target.

He unsurprisingly drew praise from his manager, who says Bazunu deserved to start all three games ahead of Liverpool's Caoimhin Kelleher.

"I knew [Bazunu] was very good. I knew had sort of special qualities as a man, first and foremost. That struck me, that he had characteristics that were quite special as a human being," said Ireland boss Stephen Kelly,

"He's a very good goalkeeper. It's a very tight decision because I really rank Caoimhin Kelleher so high. Caoimhin is an exceptional goalkeeper, it's just that he hasn't been playing. He would have started in March but was injured. Gavin came in in the end and has stayed in on merit, he hasn't put a foot wrong really. It was only the pass in Portugal, but he retrieved and that had the character to save the penalty. It was an outstanding save."

Bazunu knows that he must keep showing why he should be Ireland's no.1, but that regular games at Portsmouth will really help him.

If he continues to impress at Pompey and for Ireland, City may consider his role in their squad in the future. He has not hidden his ambitions of making it at the Etihad, and now he's proving his talents to a point where City might have a difficult goalkeeper decision to make in the future.