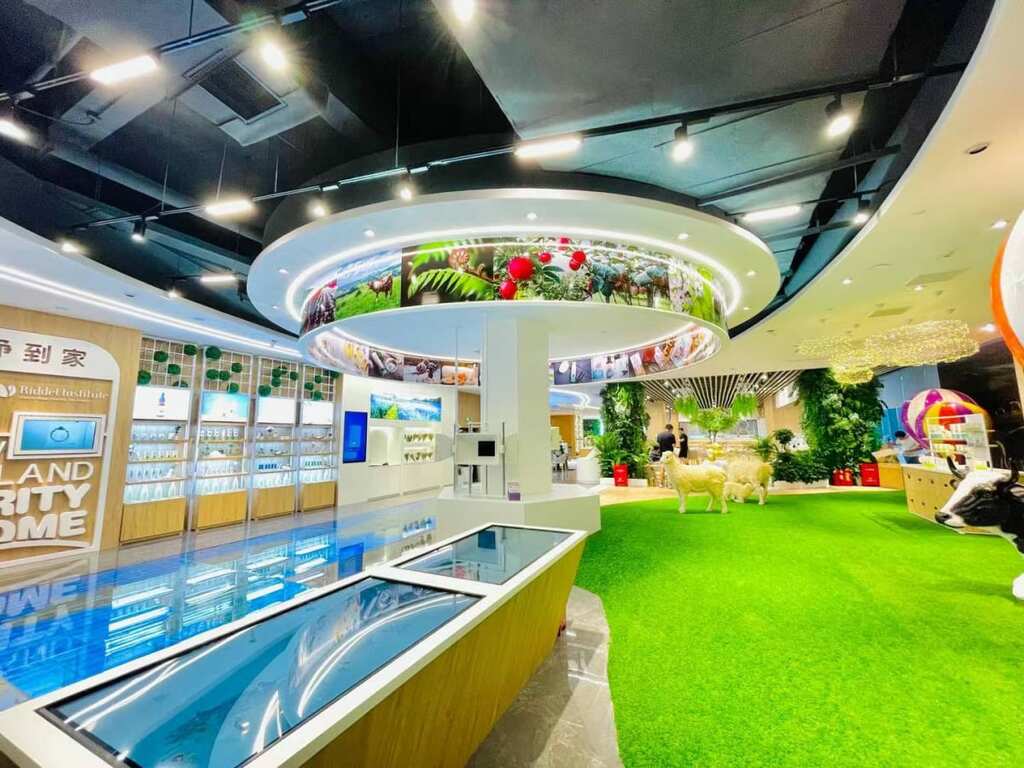 Statues of sheep on fake grass and virtual reality whale watching - while borders remain shut, Kiwi companies are reminding Chinese shoppers what NZ has to offer

Light on products, Alpha Group’s Kiwiso store was an exhibition of New Zealand.

Located in a high-end shopping mall in Xiamen, Kiwiso displayed statues of sheep and cows on fake grass, had virtual reality kiosks where consumers could experience cycling through The Redwoods in Rotorua or go whale watching in Kaikoura, alongside the 30 Kiwi wellness products.

Kiwiso commercial lead Mike Arand said because e-commerce was still an entrenched way of shopping for Chinese consumers, the store aimed to introduce consumers to unique New Zealand brands they could later shop for through Kiwiso’s app.

“The intention is not to stack it up like a supermarket, but to keep it sparse on the product front and give people a real experience of New Zealand, which is more important right at this time because obviously travel is pretty limited,” Arand said.

The company would “double down” on encouraging customers to visit New Zealand once borders to China reopened, Arand said.

China has been viewed as the golden goose for exporters around the world, and Kiwi exporters have had to compete hard with foreign multinational giants to get place on store shelves there.

A report by New Zealand Trade and Enterprise that surveyed 700 Kiwi firms from 2015 to just before the Covid-19 pandemic last year found the major hiccup for exporters was building brand awareness in China.

Nelson company Forest Herbs Research, which owned the brand Kolorex, known for its horopito extract in products, was one such brand that struggled to establish in China.

Its director Peter Butler said Covid-19 had made it even harder to establish in the country and until this year, the company’s biggest export market was Italy.

But Kiwiso’s order for products to sell through its Xiamen store bumped Italy from the top spot, making China now its biggest export market.

"Their order stretched out our manufacturer," Butler said.

Butler said having a well-established partner in China was critical to entering the market.

“A lot of New Zealand companies, like A2 Milk, have just got hammered after a great year or two because they weren’t closely aligned with the locals.

“If you haven’t got a really strong partner, you’re basically disposable.”

“We've been waiting 30 years for this opportunity. We’ve seen how other New Zealand ingredients, like mānuka honey, do so well there. Horopito is slowly gaining traction worldwide and we could make it the next mānuka honey.

“It’s time for the horopito to have its day in the sun.”

Alpha Group was founded by Massey University Professor Yihuai Gao, a mycologist whose work has focused on researching the health benefits of fungi, in 1998.

The health supplements business grew from one store on Dominion Road in Auckland, to a chain of about 1000 stores across China and Southeast Asia in two decades.

Arand said the Kiwiso concept had been two years in the making and leveraged the parent company Alpha Groups’ well-established distribution channels in China.

He said setting up a physical shop in China was important because Chinese consumers were moving towards shopping locally since the Covid pandemic and being present physically was important to garner their attention.

“All it means is we're just going to be better at what we do from New Zealand.”

He said the opening of the store came at a good time, ahead of the upcoming shopping festivals Golden Week in October and Singles’ Day in November.

The core categories Kiwiso catered for were food and beverage, mum and baby products, as well as personal hygiene, supplements and pet wellness products.

“We don't just want to sell a pack of cornflakes, it's got to be something that's got some special ingredient. And we'll work with the companies to develop that.”

Alpha Group opened Kiwiso this week to a crowd of Chinese influencers, and had more than 100,000 downloads of its app in two days.

The company planned to open 40 Kiwiso stores throughout China over the next three years and to increase its product range to 80 by early next year.