Intellia Therapeutics Inc. fell by the most in more than five years after the gene-editing company suffered a significant legal setback on the same day it unfurled promising early data on its leading drug candidate.

The Cambridge, Massachusetts-based biotechnology company is one of a throng of firms racing to bring new therapies based on the gene-editing technology Crispr to market. On Monday, the U.S. Patent and Trademark Office invalidated a key patent Intellia licensed, casting a cloud of uncertainty over how much the company will be able to profit from the drugs it is developing.

Shares of Intellia sank as much as 21% on Tuesday, their sharpest intraday decline since Feb. 15, 2017, according to Bloomberg data.

The company said in a statement that it is reviewing the patent decision, which it said doesn’t affect any of its ongoing research and development plans.

Nevertheless, investors have become wary of gene-editing stocks in the past year. Intellia shares have shed more than half their market value since hitting a 52-week high in September. Crispr Therapeutics AG has shed nearly two-thirds of its value since a recent peak in June. The company said Monday its programs will continue to advance and aren’t affected by the ruling.

Investors appear to be valuing biotechnology companies as businesses rather than exciting ideas, and Intellia is no exception, said Brad Loncar, chief executive officer of Loncar Investments.

Intellia’s clinical-trial results suggest that the experimental therapy might wipe out the protein permanently, raising the question of whether the company is sure that’s beneficial, Loncar said. It’s also not clear older patients would opt for an expensive one-time treatment over the chronic-disease medicines currently available, he said.

It’s too early to compare Intellia’s drug candidate with other medicines because the company’s therapy is still undergoing clinical trials, an Intellia spokesman said. Intellia is “carefully reviewing” the patent ruling and is confident UC Berkeley and the University of Vienna “will find a path forward to affirm” their patent rights. The institutions in a statement said they’re considering “various options to challenge the decision.”

Meantime, investors have been drawn to other technologies that may move faster and carry less scrutiny than treatments that may create a permanent change, such as messenger RNA. Gene-editing companies have also been caught up in a broader reassessment of biotech stocks. The Nasdaq Biotechnology Index has fallen by 20% in the past year, with investors increasingly pulling money out of funds that invest in the sector.

Other gene-editing companies have also been pummeled even though Monday’s patent decision would appear to leave their intellectual property in the clear. Shares of Editas Medicine Inc., which licensed patents from the prevailing side in the legal fight, have fallen 76% from a recent high in early September despite a 4.2% gain Tuesday. 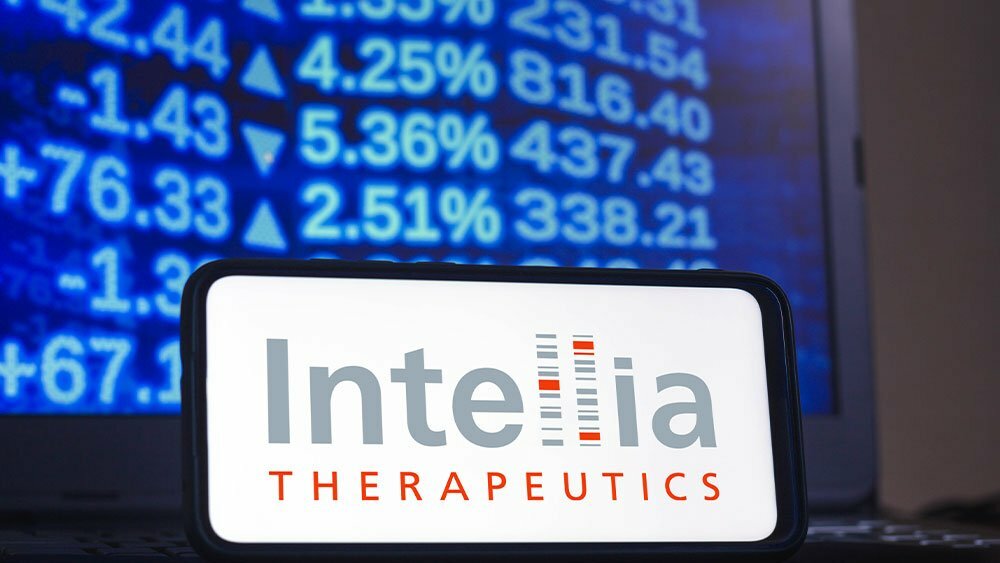 Intellia Therapeutics Crashes As Patent Decision Clouds CRISPR Gene-Editing Test
Intellia successfully lowered a problematic protein in patients with a liver disease on Monday, but NTLA stock fell on a…

The U.S. Patent and Trademark Office has ruled in favor of the Broad Institute of MIT and Harvard in a dispute…

Benzinga
One subscription that gives you access to news from hundreds of sites
Blueprint Medicines, Proteovant Collaboration For Protein Degrader Therapies