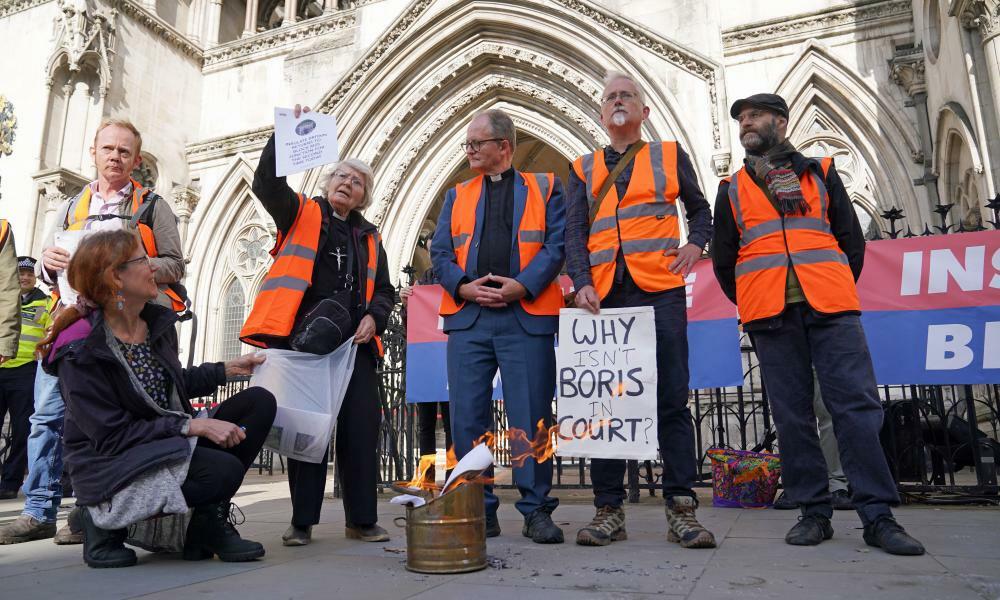 Insulate Britain protesters have accused the government of delaying taking action against them to avoid the embarrassment of having demonstrators in prison while Glasgow hosts a crucial climate summit.

Members of the climate activist group, who have blocked motorways and busy roads in and around London, were in the high court on Tuesday morning. They were responding to three injunctions granted to National Highways that ban the group from protesting on the M25, on the M4 and around the port of Dover.

On the application of the claimant, Mr Justice Lavender agreed to adjourn for a week so that the three injunctions could be heard alongside a fourth, banning the group from protesting in 14 London locations. Any trial of those accused of breaking the injunctions could be arranged then, Lavender said. A previous hearing last week was also adjourned.

Responding to the delay, Liam Norton, a member of Insulate Britain, who was in court, told the judge: “We believe that they are potentially trying to delay this injunction until after Cop[26 climate talks, starting on 31 October]. We wondered why has it taken so long to issue this injunction.”

Lavender assured him the injunction had indeed been issued. David Elvin QC, acting for National Highways, added: “I wish to make clear in public that there is no intention to have this as a long drawn-out proceedings, or to delay matters.”

Members of Insulate Britain have previously said they expected to see activists held on remand within a week of beginning their campaign. Some members have been arrested seven or eight times in the past five weeks, and they say that when they are released, they are clear with police that they will return to block roads.

A spokesperson for the group said it seemed the government was trying to avoid prosecutions until after the Cop26 climate talks in Glasgow. Asked why, she said: “We know that our government and institutions purport that we live in a democracy, so they don’t want to have 50-100 climate protesters on remand when Cop starts.”

In court, Norton said it was in fact Insulate Britain that was trying to uphold laws the government had failed to observe, specifically obligations to keep climate change within 2C and keep the UK’s population safe. “We believe that the people who should be in court today are the UK government and particularly Boris Johnson, who should be on trial for treason to the British state,” he said.