Insulate Britain: Fighting breaks out as furious drivers drag protesters from the road 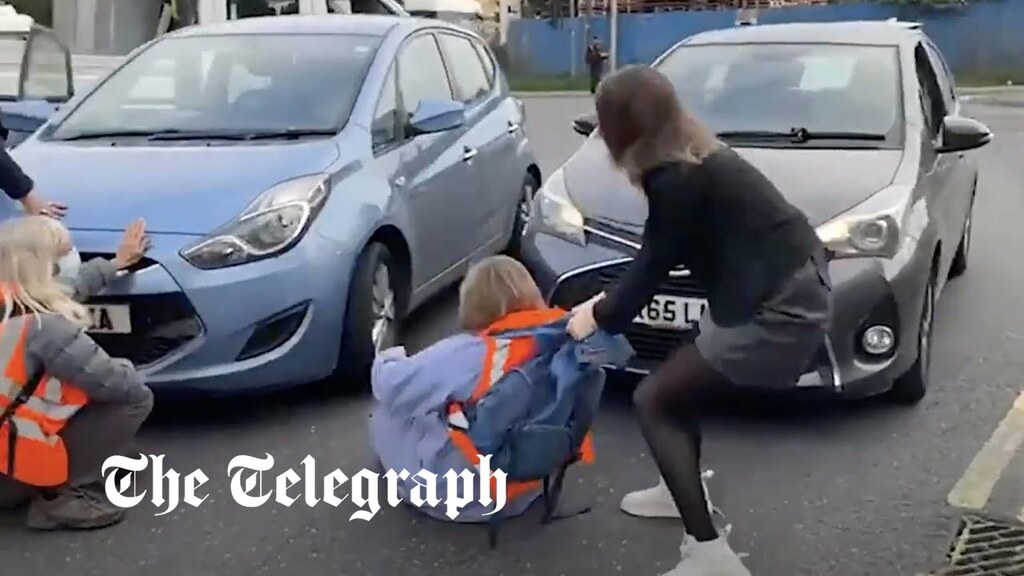 Fighting broke out at Insulate Britain's latest stunt as protesters were dragged from the road by furious drivers.

In one video, a lorry driver could be seen inching his HGV towards environmental campaigners who were sat on the tarmac in front of him.

Clashes ensued between demonstrators and angry commuters on Wednesday morning, with demonstrators dragged off the roads by drivers near a busy industrial estate in Essex.

Around 20 protesters blocked the junction to St Clements Way and London Road, in Thurrock, forcing multiple vehicles including HGVs to stop and turn round.

Motorists ripped banners out of the hands of demonstrators as they sat and lay in the road. Others had glued themselves to the road, causing long queues of cars.

A female protester was almost run over after stopping in front of a blue Hyundai car, and was berated by the driver who told her "this is stupidity".

Some members of the group were dragged off the road multiple times by drivers, allowing a handful of vehicles to pass through the human barricade.

Activists who were pulled away by their backpacks and clothing immediately returned to their spots and were seen sitting down again.

Drivers are taking matters into their own hands, dragging eco-protesters out of the road and ushering traffic through.

With no police present to mediate, fights broke out and witnesses described seeing kicking and punches being thrown.

Just before 9am, Essex Police said officers were at the scene of a second protest on a slip road off the M25. A total of 35 arrests were made across the two sites.

A spokesman said: "Thirty-five people have now been arrested after we responded quickly to reports of roads blocked in Thurrock.

"All roads are now open. Thank you for your patience and understanding."

'I'll drive through you': The motorists caught up in the chaos

Footage circulated online showed one woman get out of her black Range Rover and argue with those gathered around her car.

'I'll drive through you then!'

A furious mum screams at Insulate Britain protesters for stopping her son from going to school.

When they refused to move, she got back in the car and said: "I'll drive through you, then."

Another motorist - a HGV driver who was seen dragging protesters from the road - fumed that the demonstration caused him to miss a job interview.

This HGV driver has missed a job interview after eco-protesters blocked roads near the Dartford Crossing.

Lorry drivers also warned that the protests could cause the ongoing fuel crisis to worsen as tankers will be unable to reach filling stations.

One driver told LBC news: "If this protest stays here for much longer, I'm afraid the night shift driver will not be able to deliver fuel for any garages or anyone.

"So talking about lorry driver shortages and fuel shortages, today it may get worse. This is a hotspot.

"We also deliver to commercials, bus garages, train depots, which are all essential for transport."

Delivery driver Robert J Foulger, 57, said: "There were nine police vehicles there and countless officers not out catching criminals, costing the taxpayer money.

"I took pictures whilst sitting in traffic trying to deliver fresh produce to a supermarket distribution centre.

"I was on the moving side of traffic so didn't wait long, luckily."

The group has blocked parts of major roads around London, including the M25 and M4, to draw attention to climate change.

Transport for London (TfL) was previously granted High Court injunctions against the group to prevent them further obstructing traffic - which apply to 14 locations around the capital.

The injunctions were extended to the end of next month on Tuesday, prompting members of the group to burn the court orders outside the Royal Courts of Justice in central London.

One of the group's spokesmen - Liam Norton - was previously a spokesman for Extinction Rebellion.

He was cut off on GB on Wednesday morning by presenter Mercy Muroki after she accused him of dodging her question.

Mercy Muroki clashes with Liam Norton, spokesman for Insulate Britain, for failing to justify the environmental group's actions in the face of the government's green agenda. pic.twitter.com/rIzRXBYYV4

Despite the arrests and frustrated responses of commuters the group said other members of the public have praised its actions.

Dr Diana Warner, an Insulate Britain supporter, said: "Many people are going out of their way to thank us. Some come out of their cars to thank us, some are police officers involved with our arrests.

"To them, we bring hope - we haven't yet given up. We are still pushing for life-saving changes."