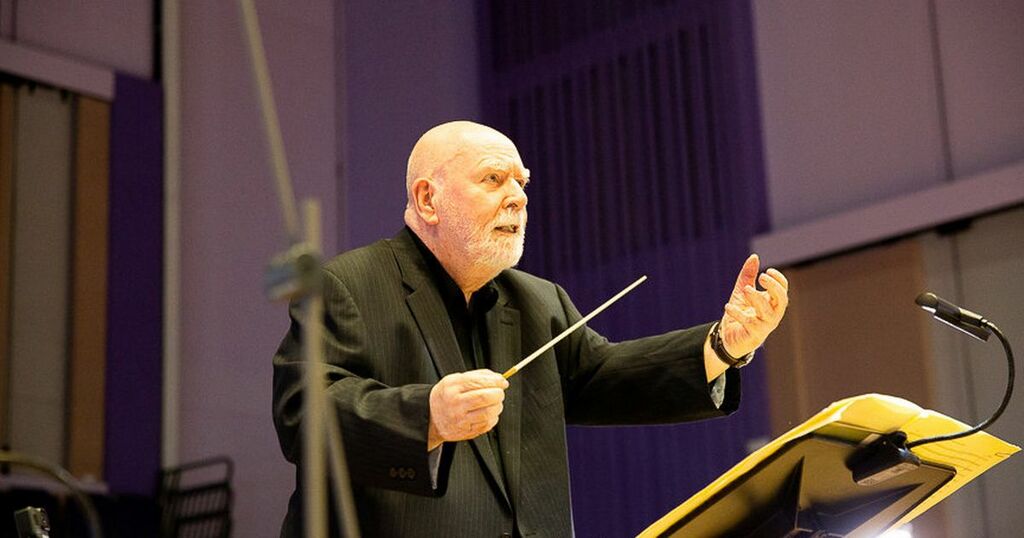 An 81-year-old man living with dementia and struggling with memory loss fulfilled a lifelong dream when he conducting a symphony orchestra.

Paul Harvey became a viral hit last year when a video of him improvising a two-minute piece from four notes was shared widely on Twitter.

The clip was posted by his son Nick who was demonstrating how musical ability can survive despite the memory issues caused by dementia.

The song was then recorded by the BBC Philharmonic Orchestra as a single with proceeds going to the Alzheimer’s Society and Music for Dementia, which campaigns for people with the condition to have free access to music as part of their care.

To mark a year since he played his composition on breakfast TV, Paul was invited to conduct the BBC Philharmonic playing two of his compositions at their studio in Salford.

He spent an emotional afternoon with the orchestra, during which he conducted both Four Notes, while his son Nick played the piano, and an older composition of his called Where’s the Sunshine.

Paul, a former music teacher and classical pianist, said: “It was magical, it was very, very special to work with such wonderful musicians.

“It made me feel alive, I couldn’t believe that an orchestra was playing my music and I was standing in front of it conducting them.

“I hadn’t conducted in such a long time before this, it was a real thrill.”

Paul was born in Stoke-on-Trent and studied piano at the Guildhall School of Music.

He became a composer – his Rumba Toccata is still used in grade 6 piano exams – and a concert pianist, appearing on the BBC Home Service in 1964.

But, he decided to become a music teacher shortly before his eldest son Nick was born.

He spent 20 years teaching at the Imberhorne school, a comprehensive in East Grinstead whose former pupils include Cutting Crew’s Nick Van Eede, famed for his hit ballad (I just) Died in Your Arms.

Five years ago, Paul moved into sheltered accommodation as part of his dementia care.

Nick, who joined Paul on the trip – organise by Music For Dementia – said he had seen his dad “come alive again” since the video of him playing piano went viral.

And he supported calls for music to be a key part of dementia sufferer’s care.

He said: “It moved dad and me and my two brothers beyond compare.

“It was a dream come true for dad to conduct and play with the an orchestra of that calibre as an 81 year old. It’s what dreams are made of.

“My dad is still reeling, he was having memories of what had happened over the last few days.

“His short term memory is generally shot to pieces but when big events like this happen it’s like a branding iron on his brain.

“When I spoke to dad afterwards he was flooded with these memories of the orchestra.

“From my experience with dad, the right piece of music at the right time can be absolutely incredible.

“You don’t have to be a talented musician to enjoy it though. Just listening to music, it starts to trigger memories of the past and gives people that connection.

“Dad was having a particularly bad day at the time. It was fascinating how getting dad at the piano at that time brought dad back to me.

“For the first time in years he has got active again. It really brought him back to life again. He’s playing the piano more than he has in the eight years.”

Paul’s session with the with the orchestra, recorded last Wednesday, was shown on BBC Breakfast on Monday morning.

Campaign Director at Music for Dementia, Grace Meadows said: "It was magical and moving and wonderful to watch him be in his element.

“Seeing Paul the musician seeing beyond his diagnosis and have the contact with the musicians was a wonderful thing. It was very emotional.”

Music for Dementia was introduced to Paul and Nick, when their BBC Breakfast appearance caught the eye of philanthropists Sir Tom and Lady Marion, who then made a donation to them of £1m.

Paul and Nick nominated Music for Dementia to receive a £500,000 grant to offer to musical services working with people with dementia throughout the UK.

Visit www.musicfordementia.org.uk for more details about their campaign.