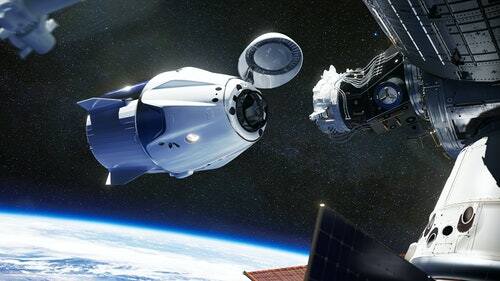 You’d be forgiven for thinking that the SpaceX Crew Dragon capsule, designed to transport humans to space atop a Falcon 9 rocket, would only be used for official NASA missions. Not so, says a former astronaut who worked with SpaceX.

In fact, SpaceX’s latest crewed mission is just the start of a bold new era.

On Wednesday, the space-faring firm is set to launch the first all-civilian mission to orbit. Inspiration4 will launch from Launch Complex 39A at NASA’s Kennedy Space Center in Florida, using a Falcon 9 rocket and a Crew Dragon capsule. The five-hour launch window is scheduled to open at 8:02 p.m. Eastern time.

The Crew Dragon capsule is perhaps best known for ferrying NASA astronauts to and from the International Space Station, but one of the figures behind its development tells Inverse that the team always had bigger plans in mind.

Want to know more about Crew Dragon’s inception, SpaceX’s surprising spacesuits, and why failure was “not an option” for the Elon Musk-led company? Read the full interview with Garrett Reisman, only in MUSK READS+.

SpaceX Crew Dragon: how it first came together

The Crew Dragon capsule was first developed as part of NASA’s Commercial Crew program. When the space shuttle program ended in 2011, NASA had to seek alternative methods to send its astronauts to the ISS. It rented seats on Russian Soyuz rockets taking off from Baikonur Cosmodrome in Kazakhstan. Besides taking off halfway around the world away, these seats cost around $80 million each.

SpaceX and Boeing were tasked with developing a human-carrying capsule for missions a little closer to home. SpaceX’s first Crew Dragon crewed mission launched in May 2020, followed by two subsequent missions.

But Reisman says that NASA missions were just one part of the plan. The Commercial Crew program always considered private missions as part of the future.

“I remember having lots of meetings with NASA as we talked about the Commercial Crew program, about how we can use these vehicles for other missions,” he says.

That would help invigorate the developing private spaceflight industry, opening up orbital flights to tourists and other interested parties.

“At the time, a lot of people I think doubted whether it would actually happen,” Reisman says. “There was a lot of questions about whether the business model would actually work. Would there be a market for this?”

Based on SpaceX’s mission plans, there seems to be a healthy interest in private spaceflight:

“That we’ve actually reached this point, it is immensely satisfying,” Reisman says.

Reisman’s team felt it could have happened sooner, however. He explains that, for the past five years, the team thought they were one year away from the first civilian Crew Dragon flight. But this deadline may have helped the team prepare for the future.

But these missions are just a small part of what’s to come. SpaceX is currently developing the Starship, a fully-reusable rocket designed to launch over 100 tons or 100 people to space at a time.

The ship’s predecessor was first unveiled in 2017 with the stated goal of replacing current-day rockets like the Falcon 9. This is despite the fact that the Starship measures 394 feet tall with the attached booster, eclipsing the Falcon 9 at just 230 feet.

“Even though Starship is gargantuan compared to Dragon...if it's truly 100 percent reusable, it might be cost-effective just to start using Starships, and not Dragons anymore,” Reisman says.

Revenue from SpaceX’s current operations will be used to fund these more ambitious goals. Musk has set the ambitious target of sending the first humans to Mars by the mid-2020s. This would act as a stepping stone to establishing a self-sufficient city on Mars by 2050.

Crew Dragon’s days may be numbered, but it could enable Musk’s overall goal to get to Mars.

TO READ THE FULL INTERVIEW, SUBSCRIBE TO MUSK READS+.

Here is what you will gain from subscribing to MUSK READS+:

MUSK READS+ is a fully independent operation. We are not Elon Musk, nor are we employed by him. Our job is to report the events we find newsworthy, giving you the inside look at the worlds of space rockets, electric cars, clean energy, and more. It means first-hand accounts of a SpaceX rocket launch, Tesla insights from third-party analysts, and more.

If you want to support us in our mission, and receive original interviews and analysis, consider contributing with a subscription.