Inside the US communities where many are still unvaccinated

Berlin, Ohio, US – Holmes County in northeastern Ohio is a typical Midwestern community in the United States.

But in many ways, this is a place far from typical: At a time when approximately 77 percent of the wider United States population has received at least one dose of a COVID-19 vaccine, only about 19 percent of Holmes County residents have – one of the lowest county-level rates in the country.

Approximately half of Holmes County’s 50,000 residents are members of the Amish community, a traditional Christian group that largely eschews modern technology and farms land in rural areas mainly in Ohio, Pennsylvania and New York.

Living an agrarian, communal lifestyle with faith and family ties at its core, few Amish community members in the county have been vaccinated, experts quoted in local media reports have suggested.

As the US surpassed one million COVID-19 deaths on Tuesday, according to Johns Hopkins University data, and as serious side effects from getting vaccinated – initially a leading cause of hesitancy – are found to be rare, 67 percent of Americans are fully vaccinated.

But that still means more than 100 million people have not received a COVID-19 vaccination, despite efforts from a diverse group, ranging from local health clinics to the White House, encouraging people to do so. Health experts have said taking all three vaccinations currently available to Americans is the best way to avoid COVID-19 hospitalisation and death.

Marcus Yoder, who runs a local heritage centre in Berlin, a village in the heart of Ohio Amish country, attributed the low vaccination rate in Holmes County to many of the same reasons people across the Appalachia region are not getting vaccinated.

“One is a concern about government control; people also hear negative things in the media,” he told Al Jazeera. “There’s also a pragmatism – people are saying, ‘Well, I’ve already had the virus, what’s the point of getting vaccinated?'”

The county has one of the lowest COVID-19 infection rates in the US, but experts believe that reflects a near absence of testing and reporting. Local health officials in Holmes County last year reported having to add new wings to their medical centres to cope with surges in infections.

According to the county’s annual health report for 2021, close to one-quarter of all Holmes County deaths last year were COVID-19 related, compared with a US-wide rate of 13 percent.

While officials at the Holmes County Health District declined to speak to Al Jazeera, the total number of reported deaths in 2020 and 2021 in the county rose by nearly a third compared with 2019. As in other communities, that increase is likely attributable to COVID-19.

None of the Amish residents of Holmes County who shared their views on vaccinations and masks with Al Jazeera wished to be named. One woman working at a used book store in Berlin said she was unsure about the jab’s safety, having heard from friends that it could cause significant side effects. “I have heard of many people getting the virus even after they got vaccinated,” she said.

Holmes County health officials have reached out to local members of the clergy, Amish community leaders and held clinics in rural areas in an effort to boost vaccinations. But continued low vaccination rates suggest those efforts have not worked; in October, Holmes County Health Commissioner Michael Derr was quoted by local media as saying, “We’re inching away at it.”

Randy Kaesberg, who lives in Holmes County but is not Amish, said he was aware of the area’s low vaccination rate, but was trying not to be concerned. “Concern is a strong word. I’m aware of it. I don’t want to be concerned about things I can’t control,” he told Al Jazeera.

Kaesberg and his wife run a local store in Berlin, where unvaccinated shoppers are still asked to wear a mask. “I don’t need others to do as I do. But a lot of other people – if you don’t do as they do – then you get some attitude.”

But vaccine hesitancy is not isolated to Ohio’s Amish community.

Overall, Ohio is the eighth-least vaccinated state in the country, with almost 37 percent not getting a single dose. Places across the US have similar rates. For example, in Storey County, Nevada, just less than 30 percent of the population has received one jab, according to local health figures.

“You see it all over. It’s just a right-wing thought that this vaccine is bad, that it’s going to sterilise people, that there’s a microchip in it that can track you,” said James Moos, a commissioner and Democrat in Montana’s McCone County, where just 18 percent of residents have received a jab.

“People say it’s been developed too quickly; well, people didn’t know what was going to happen with the polio vaccine, but they did it.”

He said he and his wife, as well as the county’s two other commissioners – both Republicans – are vaccinated. But the issue of vaccinations has roiled the community. At the height of the pandemic in 2020, a local school had to cancel sports competitions due to the spread of the virus, angering parents.

He added that efforts to reach people included sending a mobile vaccination clinic around the largely rural county last year. But while the McCone County Health Center continues to offer vaccination appointments on a weekly basis, people remain hesitant. “One good thing is that the health centre mandated that all its employees be vaccinated,” said Moos, adding that the centre is the largest employer in the county. “I don’t know how they managed that.”

While many areas with low vaccination rates are rural or have low population densities – McCone County’s 1,700 residents live in an area larger than the state of Delaware – that does not mean people have escaped the virus.

“Nearly 10 percent of the country lived in areas where less than half of the adult population was vaccinated as of November 2021,” a recent Pew Research report found. “Death rates in these low-vaccination counties were roughly twice what they were in counties that had 80 percent or more of their population vaccinated.”

Today, as the last pandemic-related restrictions are lifted across the country, the US is not out of the woods yet. The BA.2 variant, already taking hold in Europe, has been recorded to be on the rise in New York City and New York state.

But for Marcus Yoder in Holmes County, talking to and interacting with Amish friends and contacts suggests a change in attitude in the community.

He said now that most of the broader US population is vaccinated, and side effects from getting the shot are not a major concern, scepticism may be falling. “People,” he said, “are starting to get used to the idea of being vaccinated.” 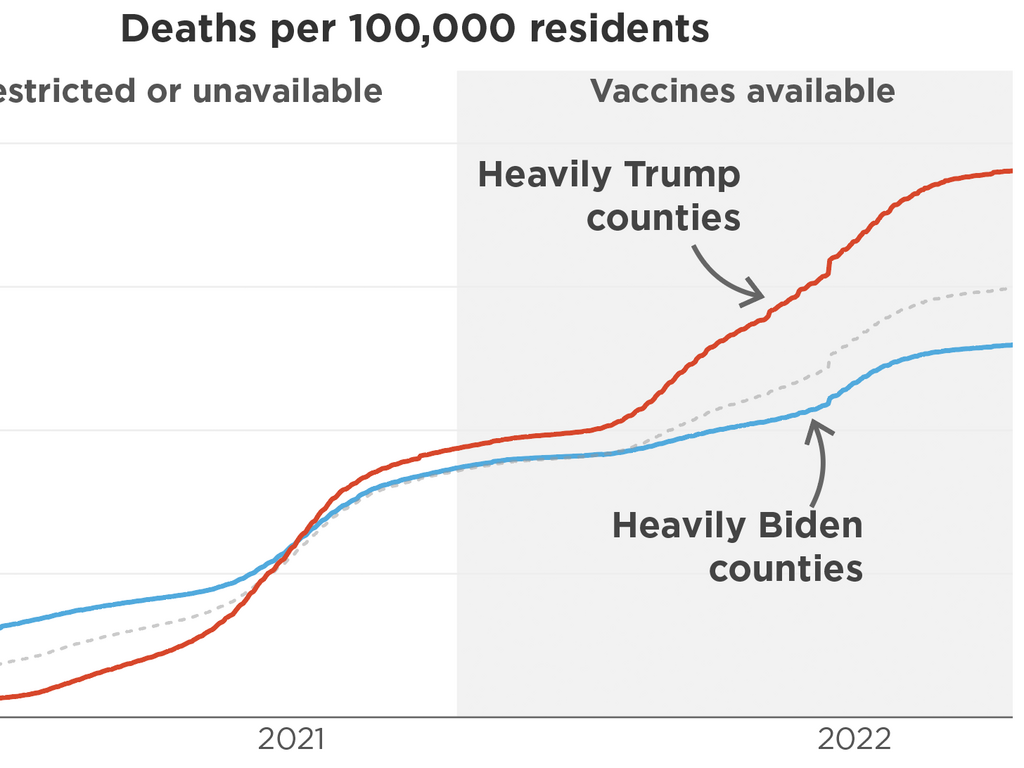 Pro-Trump counties continue to suffer far higher COVID death tolls
As Americans commemorate a million deaths due to COVID-19, the partisan divide of who has gotten sick and died continues…

Los Angeles Times
With COVID cases rising, how close is California to new mask rules, restrictions?
SAN FRANCISCO — With coronavirus cases continuing to rise in some parts of California, the big question is when some…