Inside the Thrilling and Super Fun Red Sox–Rays ALDS 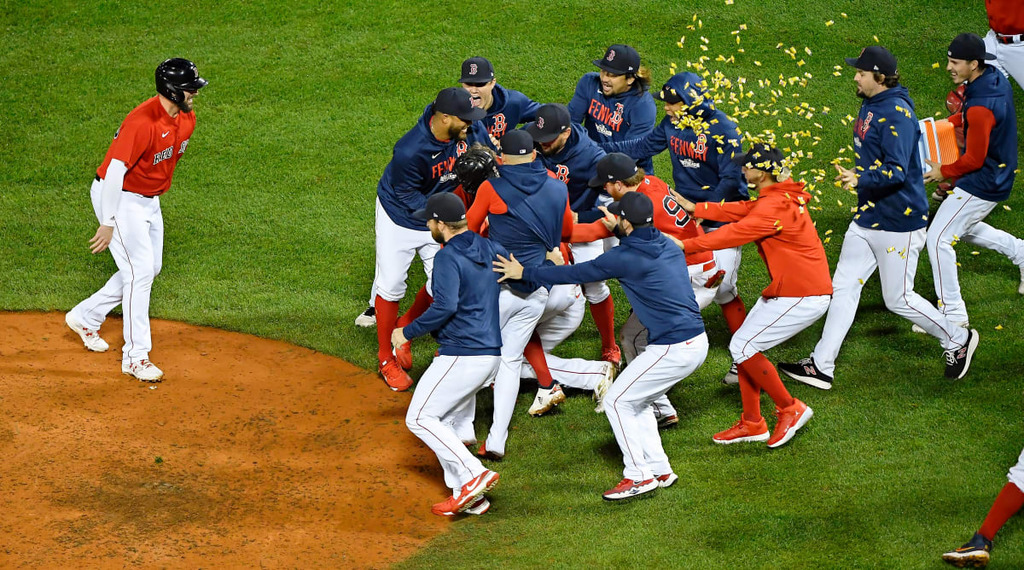 What a series. We typically reserve that summation for playoff series that go the full five or seven games, because there’s nothing like the adrenaline rush of a winner-take-all game to decide an exciting matchup. But the Red Sox–Rays ALDS, which ended in four games with Boston's knocking out last year’s AL champs, was the exception to the going-the-distance rule. This series had everything we could’ve hoped for.

First came the setup: This series featured two intradivision foes that faced each other 19 teams in the regular season, with Tampa Bay winning 11 of them. In five of the last six years, either the Red Sox or Rays finished first in the AL East. Chaim Bloom, Boston’s chief baseball officer, was hired after the 2019 season because of his success as second in command in Tampa Bay’s front office. Three key members of the Red Sox—second baseman Christian Arroyo, right fielder Hunter Renfroe and starter Nathan Eovaldi—all previously played for the Rays, while Tampa Bay manager Kevin Cash spent three seasons as a glove-first, light-hitting backup catcher with Boston. Collin McHugh, a former starter who’s resurrected his career as a two-inning spinmaster with the Rays, signed a one-year deal with the Red Sox for the '20 season before ultimately opting out due to the COVID-19 pandemic. Tampa Bay signed him this February.

Then came the action: The Rays took Game 1 with ease, knocking starter Eduardo Rodriguez from the game in the second inning and cruising behind rookie Shane McClanahan to an easy 5–0 win. They also looked to be in control of the second game, when Jordan Luplow crushed a first-inning grand slam off ace Chris Sale, who didn’t come back out to the mound for the second.

But things turned quickly, as they do in the best of series. Game 2 ended in a Red Sox 14–6 win, as their lethal lineup—sparked by the return of J.D. Martinez—erupted against the AL’s best bullpen. Game 3 was the 13-inning epic for which this series will be remembered, and it featured the requisite highlight play—the automatic double in the top half of the final frame that bounced off the right-field wall, ricochet off Renfroe and went into the Boston bullpen. What, at best, could be described as divine intervention but is probably better summed up as an unfortunate defensive gaffe actually went in favor of the team whose player made the blunder. Because the ball, no longer in flight after hitting the fence, deflected off Renfroe, who never had possession of it, went out of play, the batter Kevin Kiermaier had to halt at second and Yandy Díaz, who easily would’ve scored the go-ahead run from first base on the play, could advance no further than third. The Red Sox got out of the game and then walked it off on Christian Vázquez's two-run dinger over the Green Monster.

Game 4 didn’t have the extra-innings element or the Bizarre Play You’d Never Seen Before to make it an instant classic. But it did follow the pattern of Boston’s season: early lead, second-half collapse, final play that allowed the team to advance.

The Red Sox are the first team of this postseason to make it through the Division Series. They’ll next play on the road Friday against the winner of the ALDS between the Astros–White Sox. Houston currently leads that series, 2–1, with Game 4 set for this afternoon as the first of today’s three games. Sounds like a great day of baseball. Let’s have some more fun.

“The game was tense, punctuated with moments of sloppiness, teetering on the edge of what would have been a remarkable blown lead. But none of that mattered in the end for the Red Sox.”

That’s how Emma Baccellieri begins her column from last night’s game at Fenway Park. Really, just swap out “game” with “season” and that sentence could just as easily describe the Red Sox this year. Last night’s game was a perfect encapsulation of Boston this season, of what this team does well, the holes it still has and how it projects moving forward.

Miss some or all of last night’s NLDS Game 3 between the Giants and Dodgers? We’ve got you covered:

Giants shortstop Brandon Crawford combined his own experience and athletic ability with his team's analytical insight to produce a game-saving play against the Dodgers.

Need to get caught up on the ALDS between the Astros and White Sox before that series continues today? Here’s what’s happened so far:

Chicago's Game 3 victory over Houston produced a bunch of historical oddities that indicate how this series could turn around.

Carlos Correa's clutch double off Craig Kimbrel is the biggest of many reminders of why Houston succeeds in October.

Lance McCullers Jr. Is Emerging As a True Playoff Ace by Tom Verducci

Houston’s righthander has become the kind of rock-solid reliable starter every team needs to win a championship.

Tom Verducci writes: The Rays love their high fastballs with run, and with their season on the line they stuck to their strength. Tampa Bay threw fastballs on 32 of the final 37 pitches of their season, including 20 of 24 in the final two innings in their ALDS elimination loss to Boston. There were just five pitches between 84 and 87 mph. The other 32 all were 92–98.

Stephanie Apstein writes: You plan for the wind to affect the game in San Francisco. You do not expect the same in Los Angeles. “I hardly even remember a light breeze here most nights,” said Giants shortstop Brandon Crawford, who has played 78 games at Dodger Stadium. Gusts reached 45 mph; the ball boys and girls spent more time corralling trash than snaring errant balls. The foul poles swayed. At one point, Dodgers starter Max Scherzer was nearly blown off the mound. At least three drives that are home runs here on any other night died on or before the warning track, two by the Dodgers and one by the Giants. “It was huge,” said L.A. manager Dave Roberts. “Those two balls right there, it would have been a different outcome. But those are the elements that both teams had to play with, and that's baseball.” Fortunately for everyone, the forecast for tonight’s Game 4 appears to be clear.

Today will be the last time this year we can watch three MLB games on the same day, so make the most of it and set up your remote workstation in front of the TV if you can. After Astros–White Sox Game 4 was delayed Monday due to inclement weather, Houston will see if it can close out Chicago on the road at 2 p.m. ET on FS1. The Braves will then try to become the first NL team to clinch a Championship Series berth. They face the Brewers at Truist Park in Atlanta at 5 p.m. ET on TBS. They’ll be followed by Giants-Dodgers at 9 p.m. ET on TBS, with the defending champions looking to stave off elimination at home in Los Angeles.

The Braves and Brewers have combined for just nine runs thus far, making their matchup the lowest-scoring division series in league history through three games, according to MLB.com. Milwaukee’s lineup has been especially inept, with Rowdy Tellez’s two-run homer in Game 1 counting as the Crew’s only run-scoring hit through three games. Could manager Craig Counsell adjust his starting lineup Tuesday to try to spark an offense that hasn’t produced a run in 19 innings? It’s not as if there’s an obvious name to blame above the rest—every Brewers regular has at least one hit, but shortstop Willy Adames, with four, is the only player with more than two. One candidate to be replaced is Lorenzo Cain, who’s 1-for-9 with a walk in this series and crashed into a stanchion in center field yesterday while trying to make a catch—an unfortunate event that the 35-year-old admitted may leave him sore Tuesday. It could make sense to hand a start to Tyrone Taylor, who outhit Cain during the regular season.

Counsell has ruled out a start on short rest by Cy Young candidate Corbin Burnes in Game 4. Even with Milwaukee’s back up against the wall, its starters are ill-prepared to go on three days’ rest after being part of a six-man rotation with five days’ rest for most of the season. So instead, on the mound for the Brewers today will be lefty Eric Lauer, who’s one of their two players not to enter a game yet and the only starter who could go on full rest. Lauer effectively handled hitters on both sides of the plate this season (righties: .641 OPS, lefties: .635 OPS) and quietly ranked in the top 10 in the second half (min. 60 IP) with a 2.60 ERA. But if Atlanta’s righty-heavy lineup can jump on Lauer, it’ll put a ton of pressure on Milwaukee's offense, which is 0-for-16 with runners in scoring position thus far.

The Rays’ bullpen has been one of their biggest assets all year; indeed, it’s been among the strongest in baseball. (Their 3.24 relief ERA was best in the AL and their 3.36 K/BB was best in MLB.) But the emphasis on their ‘pen all year might have overshadowed just how little they had in the way of starting pitching depth. Sure, that’s naturally less of a focus when you have a relief corps this strong and with the ability to take up so many innings. (Tampa Bay’s bullpen was the only one in baseball to end the season with more than 700 IP.) But there’s still much to be said for keeping choices open in terms of your starters, and with their season on the line, the Rays didn’t have that. It was always going to be hard to figure out a pitching plan for a do-or-die game the day after a 13-inning marathon. (It was for the Red Sox, too!) But it didn’t have to be this hard. Having just one more serious starter—like, say, Charlie Morton, whom they let go this winter, or Rich Hill, whom they traded for next to nothing in July?—might have made a real difference in the outcome here.