Inside the SEC’s Debate Around a New Football Schedule

Months ago, a consulting firm produced more than 30 different formats for a future football scheduling model of a 16-team Southeastern Conference.

While most officials feel strongly that divisions are likely gone, and a pod system first floated out in the fall has been eliminated, the conference is virtually split on what to do next: eight conference games or nine? With this issue—and so many others—the SEC is divided mostly on revenue-generating lines.

“It seems like a deadlock,” says one person familiar with the discussions.

While the new, 16-team SEC is poised to potentially be the richest and most powerful in the history of college athletics, it is also one of the most diverse—a broad stretch of turf that features schools with differing financial situations, cultural views and varying interests. Like a microcosm of the NCAA itself, the SEC has haves and have-nots, both in historical athletic success and athletic budget.

The league’s two new members coming in 2025, Texas and Oklahoma, have reshuffled the gridiron hierarchy deck a bit. But most within the conference would consider the top half Alabama, LSU, Auburn, Texas, Texas A&M, Oklahoma, Georgia and Florida. The bottom would be Tennessee, South Carolina, Arkansas, Kentucky, Vanderbilt, Ole Miss, Mississippi State and Missouri.

More than just about any other conference in the U.S., the league has a fairly clear delineation between those top eight and the bottom. After all, the Mississippi States and Vanderbilts are sometimes playing a different game than the Alabamas and Georgias. Many times, they do not agree on legislation, such as this one. What’s better for the top eight isn’t always best for the bottom eight. For instance, an eight-game model would allow every team in the league an additional fourth nonconference game to, some might say, pick up a needed victory—something the bottom teams need more than their big brothers.

And what do their big brothers want? To make the league more valuable than it already is by increasing the number of inner-conference matchups. A property that is already incredibly valuable could be made more valuable.

“We have to do what’s in the best interest of the league,” says one SEC administrator. That’s why the big boys might get their way. Most feel like at the end of this debate, the SEC will be playing a nine-game conference schedule in a 3–6 model. But the discussions aren’t over yet, and there hasn’t been an official vote taken. Those reading the room, though, say it’s split, maybe right down the middle: eight vs. eight. A majority is needed from the athletic directors to make a recommendation to the presidents, who normally approve such measures. However, Texas and Oklahoma are not yet voting members and won’t be until they officially join the league. The other 14, meanwhile, will be debating eight versus nine.

So what are their talking points? Let’s get to the issues:

In the conference’s current format, teams play eight conference games: six each year from within their own division and two opponents from the opposite division, one on a permanent basis and one rotating—a 6-1-1 model that has long been the target of criticism both in and outside the league.

Why? Because it’s not equitable and doesn’t allow for more games against more teams within the conference. For instance, last year’s Alabama-Florida game in the Swamp was the first regular-season matchup between the two in 10 years.

If there’s one concept everyone in the league has agreed on, it’s that they should play one another more often. Either of these formats, 1–7 or 3–6, allows for such. The rotation would mean that each team will host and travel to every league opponent in a four-year stretch.

Aside from supplying an extra nonconference victory for those that need it, what good is the eight-game model over the nine-game format? For one, proponents say, it is an even number, and even numbers are easier to schedule. For example, under a nine-game model, an SEC team will play just four home games every other year.

Imagine being the team that in Year 1 has a four-game home SEC schedule while your competitors have five. As one insider put it, “Those teams are going to be pissed.”

The benefits of increasing to nine games are pretty obvious. The value of the conference rises. It means more butts in SEC stadium seats (and a more glamorous season-ticket package) at a time when college football attendance is declining nationally. It means more eyeballs on SEC games—bigger matchups more often. The 2020 COVID-19 season provided the blueprint for this. The league went to a conference-only 10-game schedule, and it was the most-watched season of SEC ball.

A nine-game league schedule also means not shelling out $500K to $1 million for the traditional nonconference “buy” game. However, a nine-game slate would not mean more immediate revenue from the SEC’s new TV deal with ESPN, those with knowledge of the contract say. Could the contract be renegotiated based on the increase in revenue? Maybe. After all, it would be eight more SEC games.

A nine-game lineup has its issues, of course. Yes, you don’t get that easy extra win and you’ll have an uneven amount of league home games on alternate years, but the format also means that games already scheduled years from now might need changing. Several conference teams have scheduled two Power 5 opponents down the road. Imagine an SEC team playing 11 Power 5 opponents in a single year. It’s happened, but not often.

Speaking of Power 5 games, it’s at the center of possible compromises within the room of 16 athletic directors. For instance, can the top eight convince the bottom eight to move to a nine-game schedule if the conference eliminates its requirement to play one nonconference game a year against a Power 5 opponent? Maybe.

But what if it’s the other way around? What if the bottom eight could convince the top to move to an eight-game schedule if the league adds a second Power 5 nonconference game to the requirement? That might be more of a reach.

Some administrators are more comfortable with a nine-game schedule if the College Football Playoff is expanded to 12 teams, which many expect to happen eventually. At that point, a three-loss SEC team would have a good shot of grabbing one of the six at-large berths. However, expansion talks last year failed, thus guaranteeing at least one year (2025) of a four-team playoff while under a new SEC scheduling format.

Is this purposely done? Maybe. Might it be a compromise to get the bottom half on board with a nine-game schedule? It sure feels that way. And honestly, it makes a ton of sense, and it’s something the league used in creating the 10-game league schedule during the COVID-19 season.

Still, choosing a team’s permanent opponents will be a most tricky and unenviable endeavor that is sure to tick off virtually every fan base in the conference. Athletic directors and coaches have given their feedback on permanent opponents, but ultimately, conference officials will make the decisions. Good luck to SEC administrators Mark Womack, who is in charge of scheduling, and Charlie Hussey, who himself has been involved in this issue recently.

Schedulers have plenty of problems to sift through. While a nine-game model would protect primary and secondary rivalries, it also eliminates pairing opportunities. Also, if there is indeed a requirement to give each top half team two of its own and each bottom two of its own, that’s another hurdle to leap in arranging schedules.

It may create some odd situations, such as Florida having a permanent opponent that is 1,200 miles away (Oklahoma) or the yearly Texas A&M–Arkansas game going biennial. Also, how do you get rid of the SEC’s most-watched single matchup over the last decade—LSU vs. Alabama? Well, maybe you don’t.

What about year-ending matchups? Those against ACC teams—South Carolina (Clemson), Florida (FSU) and Georgia (Georgia Tech)—are expected to remain as is. Most of the current year-ending SEC games may not change, either, such as the Egg Bowl, Iron Bowl, LSU–Texas A&M and Tennessee-Vanderbilt. But you might get some news ones, like Oklahoma-Missouri and Arkansas-Texas.

And what of the Longhorns and the Aggies? How does the SEC welcome Texas into the league and not have it restart its annual rivalry series with A&M? It doesn’t make sense. They must play, multiple administrators tell Sports Illustrated.

But everyone shouldn’t be so hung up on the permanent games, says one athletic administrator. “You’re going to play everyone every other year,” the official says.

Timing and the arrival of the new guys

So when could all this be wrapped up?

The scheduling issue is supposed to be a primary topic during league meetings in Destin, Fla., though the two newbies—Texas AD Chris Del Conte and Oklahoma AD Joe Castiglione—are not expected to be in attendance.

Officials aren’t sure a decision will be made then or pushed until later this summer.

Many within the conference feel like a decision needs to be made by the end of the calendar year, at the very latest. While Oklahoma and Texas aren’t due into the SEC until the 2025 season, there is always a chance that something could be worked out sooner.

It seems highly unlikely that OU and Texas will strike a deal to leave the Big 12 next year. There’s no real rush anyhow. The SEC’s new TV deal doesn’t start until 2024, when it becomes possible for the Longhorns and Sooners to grab a prorated share of the conference’s new TV revenue. Maybe they find an avenue to enter a year earlier than normal? The Big 12 will have a new commissioner and will be working on a new TV deal itself. Anything is possible.

Meanwhile, the current 14 SEC presidents, athletic directors and coaches are all expected to descend upon the Hilton Sandestin next week with plenty to keep them busy. Sure, there are transformation committee discussions (SEC commissioner Greg Sankey co-chairs that group). And yes, there will be plenty of talk about name, image and likeness (NIL) and the future of the NCAA.

But the biggest single decision could be about, of all the things, schedules. 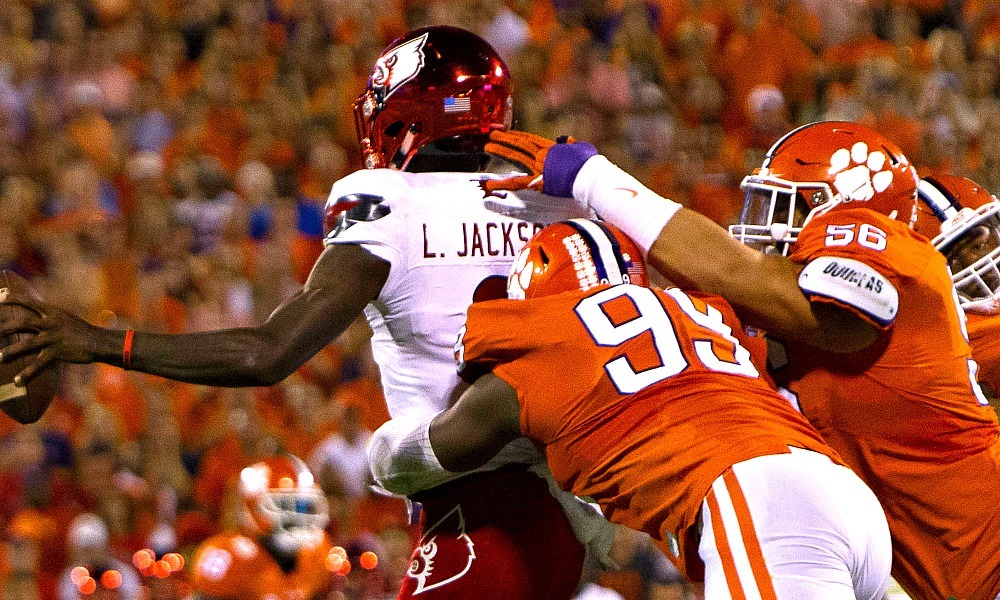 College Football Conference Championship Games Without Divisions. What Would’ve Happened?
College football conferences without divisions? What would the championship games have been without them?

We ranked the best SEC running backs for the 2022 season

Which SEC East teams have the toughest and easiest nonconference schedules in 2022?