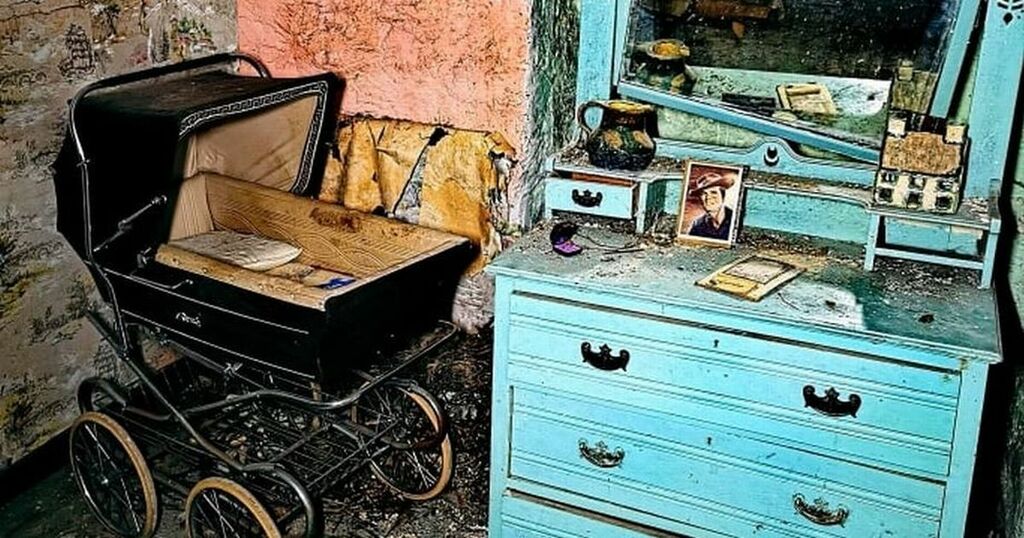 Incredible pictures have emerged of an abandoned Welsh cottage that has remained empty since the 1970s.

An urban explorer has revealed pictures of the fascinating property, which lies isolated from the rest of civilisation on the outskirts of Wales.

The building, which has become known as the 'American Cottage', was constructed in 1823 and can be found down a long country lane near Oswestry, overlooking Llansilin village, North Wales Live reports.

Read more: Inside Cardiff's most expensive homes — not one is worth less than a million

It's not known how long the property has been empty, but newspapers found at the house date back to September 1970.

An American property developer, named John Williams, is believed to be the man who built the house. He emigrated to America in the mid 1800s and staked a claim on a piece of land.

Much to his disappointment the claim was not honoured so John was forced to return to Wales and remain in the cottage. This led to locals from the nearby village calling his house America due to his dismay.

Residents from the nearby village claim the last occupant to reside in the property was a man called OJ, who worked as a lengths man. He was said to have looked after the stretch of road from Llansilin to Rhydycroesau, and lived at the property until around 2004. Since then it's believed to have remained abandoned.

Yorkshire-based Urban Explorer, Kyle Urbex, told of his experience when visiting the house earlier this year.

Kyle, who goes by the name @Kyle_Urbex on social media, said: “After making the long trip up the track to this isolated cottage I was lucky enough to find an open window straight in.

“In the pitch black I found this quite eerie, given the fact I was essentially in the middle of nowhere.

“A slightly odd in places property, with a toilet installed at the foot of a staircase with nothing blocking it like a wall or a door and half a staircase going up to the roof.

“Once inside I discovered everything from family photos clinging to the walls, old toys in a box that would have been played with by children at some stage.”

Kyle then added: “I uncovered a paper from the 1970s and once finding my way upstairs, I found the dressing table complete with creepy old styled pram and jewellery scattered across the desk complete with old style gas lamps still left to rot on the window ledge.

“The things left behind upstairs were amazing and the views were phenomenal."

“Overall, I'd say this was one of my most creepy explores given the fact I found the pram and how it's all just left to rot and decay away left silent and derelict to be forgotten about for good.

"Regardless, I had a lovely peaceful explore tucked away up there away from civilisation."

More images, and videos of explores across North Wales can be found on Kyle's Instagram page.