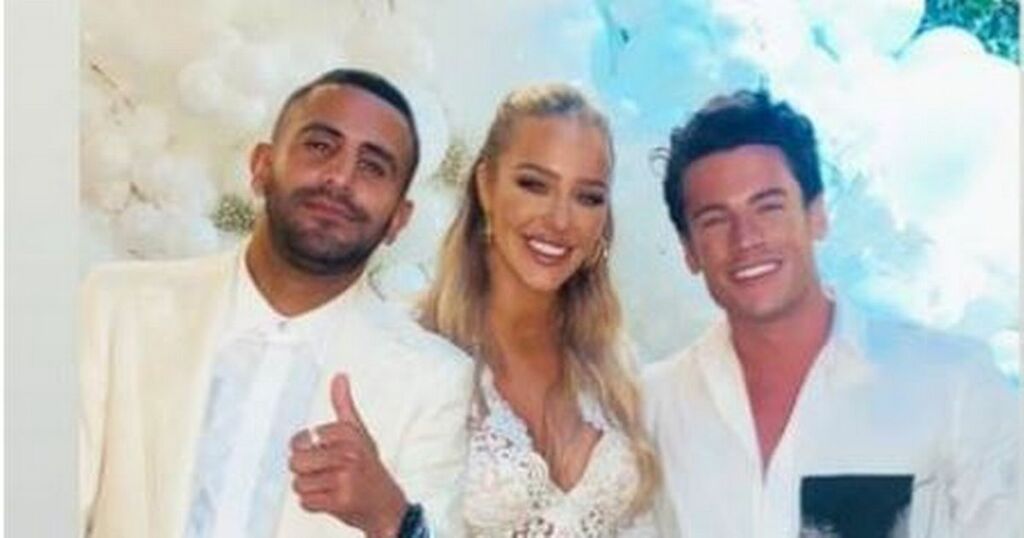 The smitten couple, who announced their engagement in June, hosted a dazzling white theme party for their friends and family.

Guests wore white to the bash and the venue was decked out with white balloons and feathers and giant letters 'T' and 'R.'

And a huge heart-shaped floral arch took pride of place.

Taylor, 23, looked stunning in a white lace top and flared trousers alongside her dapper fiance.

Organiser Steph Ledigo of Go PR shared pictures of the event on her Instagram and described the party as 'Kardashian level.'

The 30-year-old footballer popped the question on a holiday with family and friends in Mykonos.

Taylor, the daughter of former The Real Housewives of Cheshire star Dawn Ward, said she 'can't wait to grow old' with the midfielder.

The swanky bash was held at Warford Hall, the home of Taylor's parents Dawn and Ashley.

"There’s no one I’d rather do this life with, here’s to a lifetime of us," she said.

"Can’t wait to grow old together. I Love You."

Taylor recently became an aunt after her older sister Darby welcomed her first child with her fiance Michael Corrado Jackson.

She shared a photo of herself with her niece Skye as she wrote: "Welcome to the world baby girl, auntie Taylor loves you... Skye Lynne Jackson."

Riyad began his career as a youth player for French club AAS Sarcelles.

In 2018 Manchester City confirmed his signing on a five year contract.

Riyad was previously married to Rita Johal in 2015 and they have two daughters.

In October last year, after splitting from his wife, he went public with his relationship with Taylor.

She shared a loved-up picture of the pair on her Instagram with the words: "Me & U."