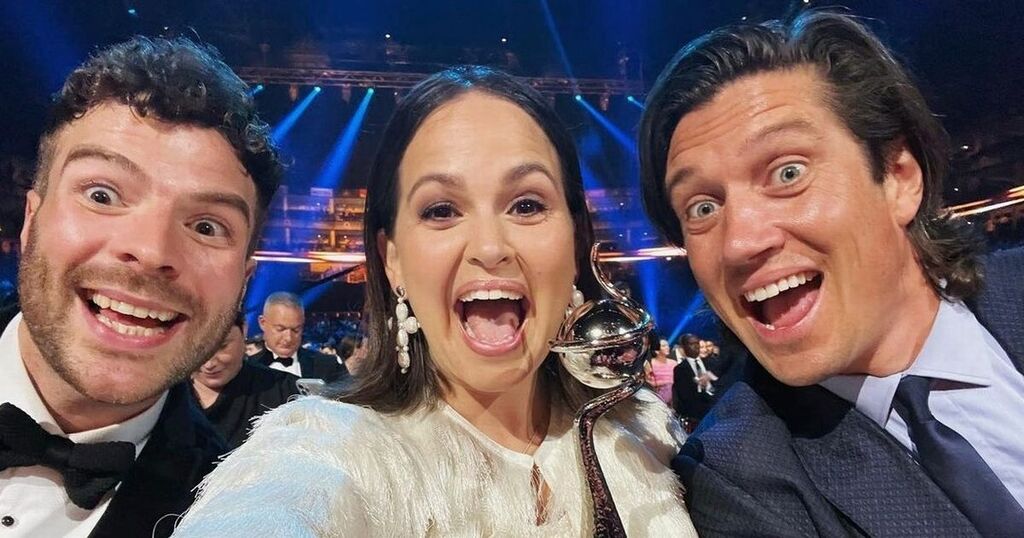 There's always a hangover after the National Television Awards, and there's no doubt that some of the biggest stars in the UK are nursing sore heads right now after the wild after parties on Thursday night.

It all kicked off at the 26th annual ceremony at London's O2 Arena as the best in the business of reality TV, daytime shows, soaps and thrilling drama's gathered together to celebrate an incredible year of TV in such an unprecedented time.

Winners and nominees alike cheered each other on during the emotional awards where Kate Garraway scooped the gong for Best Authored Documentary for her heart-wrenching film Finding Derek which focused on his life-changing Covid battle.

The enchanting night saw Ant and Dec make history as they were awarded the gong for Best Presenter for the 20th year in a row - beating the likes of Piers Morgan and Holly Willoughby on the way.

After the fun-filled yet emotional ceremony, the stars were finally able to relax and let their hair down at the wild National Television Awards afterparty where TV worlds collided as Love Island stars got cosy with the cast of TOWIE and Coronation Street actors downed drinks with their rival EastEnders crew.

Here, The Mirror takes a look inside some of the wildest and most wholesome moments from the NTA's afterparty.

TOWIE's Demi Sims made sure to document her night on her Instagram Stories - treating fans to a glimpse inside what the NTA afterparty is really like.

Reality TV worlds collided when Demi danced with Made In Chelsea's Blackwell who planted a cheeky kiss on the TOWIE star's cheek as they lapped up the electric atmosphere of the night.

Phillip Schofield celebrated This Morning's NTA win by indulging in all that the afterparty bar had to offer.

After thanking viewers in an emotional speech after winning the Best Daytime show award, Phil relaxed with the team's trophy and treated himself to not one but three drinks to celebrate.

Taking to his Instagram Stories, The This Morning host snapped a photo of the coveted trophy which sat alongside his beverages as he quipped: "Another round?"

There's no doubt that Phil will be feeling a bit ropey this morning.

The National Television Awards wouldn't be the same without the cast of Love Island.

The quick-witted islanders kept audiences entertained throughout the summer as the drama and love-triangles never seemed to end.

Last night, the biggest stars of the 2021 series, including winners Millie and Liam, reunited to mix with other huge TV stars like the TOWIE cast and of course, Love Island host, Laura Whitmore.

Millie Court and Liberty Poole looked stunning alongside Chloe Sims as they posed for a gorgeous snap.

The Irish native gushed over the Geordie winner, claiming that she 'loved her' as they busted out some moves on the dancefloor.

I'm A Celeb, Keep Me In Here

And the pair made the most of their time back together at the wild afterparty as they posed with their coveted gong, even carrying it to the dancefloor for a jig.

Giovanni and Vernon also reunited with fellow campmates AJ Pritchard and Victoria Derbyshire as they gathered into a selfie to pose with their award.

I'm A Celeb champion Giovanni looked sensational in a stunning white gown which featured an elegant and on-trend feather shall.

Ever the party animal, the NTA's was no exception for Glow-Up host Maya Jama.

The 27-year-old presenter took her followers along with her on the wild night as she documented her shenanigans on Instagram.

The bubbly star posed alongside some of the biggest stars in TV as she danced the night away in her showstopping black gown featuring a sequin bodice.

Strictly Come Dancing's Janette Manrara slept in her stunning dress and with her award by her side after the wild afterparty.

The gorgeous star posed a snap of herself waking up in the same clothes the morning after the night before after causing havoc on the dancefloor.

Janette completely stole the show on the red carpet when she arrived at the NTA's on Thursday evening.

Her feathered rust dress with it's plunging neckline turned heads as she modelled the backless number for the cameras before the exciting ceremony.