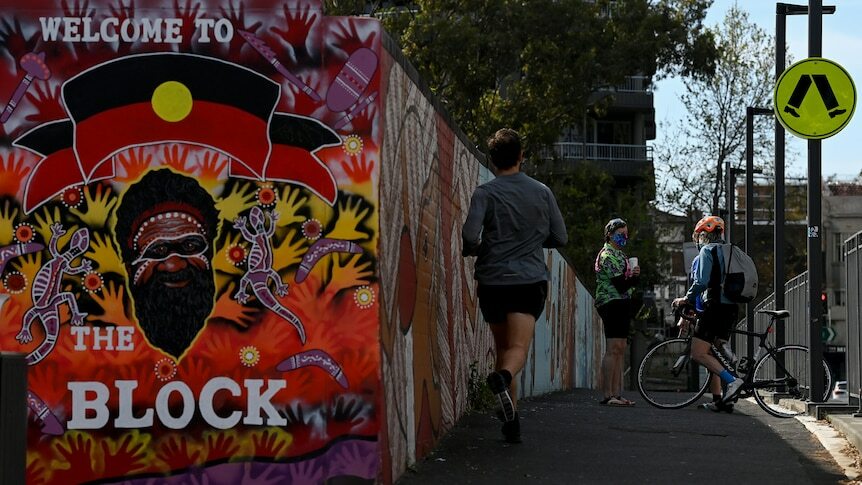 When Joanne Bostock was admitted to Royal Prince Alfred hospital last month for a kidney infection, she was given antibiotics and discharged.

But later that night she received a phone call from the hospital advising she had tested positive to COVID-19.

"I thought I just have a cold, I can deal with this. But the next morning when I woke up I couldn't breathe," she said.

An ambulance was called and Ms Bostock was taken to the emergency department.

Her oxygen intake and blood pressure levels were plummeting and doctors were trying to break a high fever of 40.1 degrees Celsius.

Eventually, she had to be admitted to the intensive care unit (ICU) where her condition would deteriorate over the next few days.

Doctors told her family to expect the worst and the dire news was especially tough on her seven children and five grandchildren.

"It was just a waiting game over the next few days whether I was going to make it or not," she said.

"For them to hear that I might not make it, it was hard [but] they kept me going."

She described her time in the ICU's pressurised room "like you're in a sauna or a shower and you've got a plastic bag over your head and at the same time someone is sitting on your chest".

The 55-year-old avoided having to be placed in an induced coma and her vitals started to normalise.

Ms Bostock is still in a general ward almost a month later and she is still a long way from recovery.

She said she hoped her experience would encourage others to take the virus more seriously.

"I was one of those people who were like, 'Oh, COVID, like this is a little cold' … but that's not what happens," she said.

The Bundjalung and Mununjali woman has lived in Glebe for over a decade. She is one of a growing number of new infections in the area.

Last Thursday Glebe, Redfern and Waterloo were flagged as new suburbs with increasing case numbers — all have high populations of Aboriginal and Torres Strait Islander residents.

Data from NSW Health shows cases almost doubled in the past seven days in Redfern from 76 to 149. Glebe and Forest Lodge have 97 cases, Waterloo and Zetland have 184.

On Monday, Premier Gladys Berejiklian said that, while there had been a stabilisation of infection numbers in some of the local government areas (LGAs) of concern, authorities were worried about rising cases in Glebe and Redfern.

Efforts are now being made to ramp up vaccinations across the area.

Redfern Aboriginal Medical Service chief executive LaVerne Bellear said her organisation was working with the Sydney Local Health District to ensure not only her 6,500 patients were vaccinated but also the wider community.

The service has administered almost 2,000 doses of vaccine for people aged 16 years and over, or almost a third of its patients.

New vaccination clinics have been set up at Redfern's National Centre of Indigenous Excellence and at the Peter Forsyth auditorium in Glebe.

A testing clinic has also been set up at the Redfern Community Centre.

"Our culture involves greeting people and everyone, our extended families, and all of that comes into play and we're now having to tell our families and friends to not come — and that is not on our nature," she said.

"So we've had to re-train how people think."

Ms Bellear said the focus had been predominately on elders and their welfare throughout lockdown, but concern had turned to young people.

"While they're still going from household to household, we're trying to slow that up and get our message out there," she said.

"Once we get the messages out there to our elders, and to their parents, the importance of isolating and staying away from one other — even if its just for a few weeks — we can do it, but we have to get the right message out there."

Aunty Marlene Cummins, who has lived Redfern for the past 30 years. recently learned her son Leroy had contracted the virus.

It's unclear whether the 47-year-old became infected in Redfern, or at the Parklea Prison Facility where he has been for the past two weeks.

That facility's outbreak is nearing 200 infections.

"I'm feeling very hurt and helpless," she said. "I haven't spoken to my son in three weeks. I don't know how he is doing."

Her son, Leroy, was himself a well-known musician and guitarist who had struggled with addiction issues.

"I've never heard any level of support for people that are addicted or homeless, [it's] assumed they're another rat-running on the street and not worthy," Ms Cummins said.

"There's no communication, there's no outreach to encourage them. I see blackfullas around here very destitute, very sick and very alone."

Surrounded by high-rise apartment buildings, Ms Cummins was concerned about further potential spread of the virus.

"[There's] a couple of hundred in one block of high rises all around me here, I feel the so-called experts should be taking in consideration the people that are in these poverty-stricken [areas]," Ms Cummins said.

"People in the places are not well-off … they're low-income people and now its spread through here.

"How come we're not reaching out to the grassroots people, the battlers, who are living in these areas?

"We're all stuck together."