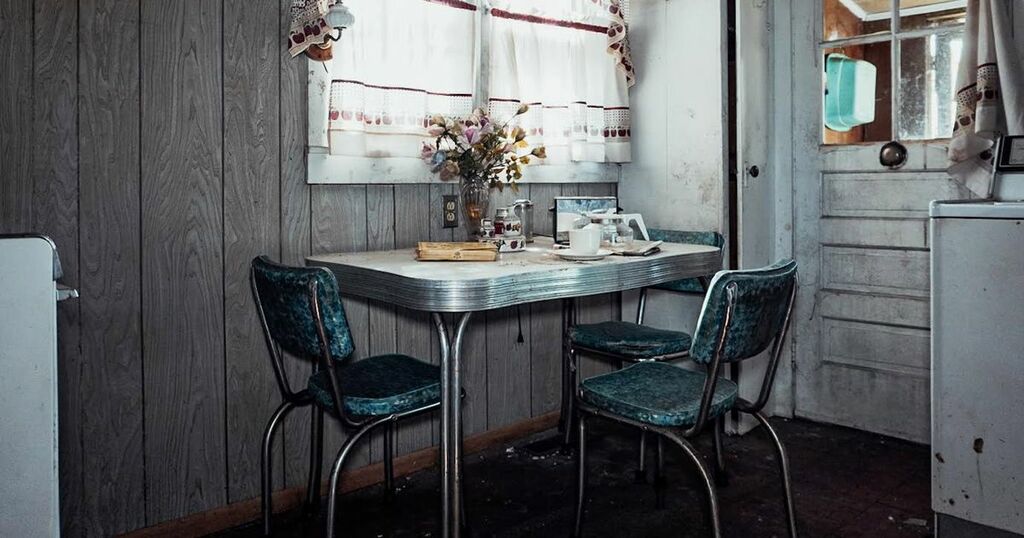 A peek inside a long abandoned home of an elderly couple shows the house eerily intact - with even the beds still made.

Urban explorer Gaby, 24, and her boyfriend Sonny found the property after searching for abandoned homes online - but were shocked when they visited the house, which was "full of memories."

Gaby, who didn't share the location of the home, said it had 10 small rooms over two floors - some of which were "stuffed with miscellaneous belongings."

She found furniture and appliances still in place, and a kitchen full of plates, glasses and utensils. There were even dirty dishes from eaten meals in the rooms.

The living room was filled with old blankets, old vacuum cleaners and a Zenith TV.

Photos found in the house showed an older man sitting on the same sofa that is still in the living room, reading a newspaper.

Other snaps, which the couple discovered in a suitcase, showed weddings and people holding a baby.

Gaby also found a handwritten recipe for courgette bread - which she later tried out and said was "delicious."

While she pored over the items in the home, she couldn't solve the mystery as to why it was abandoned so quickly.

She said: "It's always hard to know why an abandoned home was left behind, or what led the family to leave so many belongings.

"As for this home, I really don't know for sure. But we can look at what is left and sometimes that can tell us at least a part of the story of the people who once resided there.

"In this case, there were so many photos of an older couple, and generally the décor and style of the home suggested that it was indeed an older couple that resided there."

She said that, although she hoped it wasn't the case, the couple could have passed away and left the home to someone who didn't want to do anything with it.

"Based on my observations of the home alone and the unkempt state of it, I imagine it's been more than a few years at least [since it was abandoned]," she said.

She shared clips filmed inside the home on her TikTok account, @urbex_muse, with her 1.5 million followers.

The post was viewed nearly 300,000 times and racked up 40,000 likes, tugging on the heartstrings of many viewers.

One person said: “I don’t know why but this made me super emotional.”

“The feeling of homes like this is surreal. Time just stops, everything stops because they stopped,” said another viewer.

Another person added: “As someone who does genealogy stuff, it breaks my heart seeing all of those memories left behind.”

Gaby, who is a student, loves exploring abandoned houses and trying to piece together what happened there but she admits it can be very emotional.

She said: "It always feels a little sombre knowing that the home I am exploring was once bursting at the seams with memories, and that for some people still out there that home means the world to them.

"But it can also warm my soul so much when seeing evidence of a happy home rather than an unhappy one, whether that be reading old letters or postcards from the family members to seeing the photographs left behind to just feeling the energy of the home itself.

Have you ever found an abandoned home? Email jessica.taylor@reachplc.com

"Sometimes just even stepping into the space you can so clearly feel the sense of happiness and love left behind by the people that once stayed there."