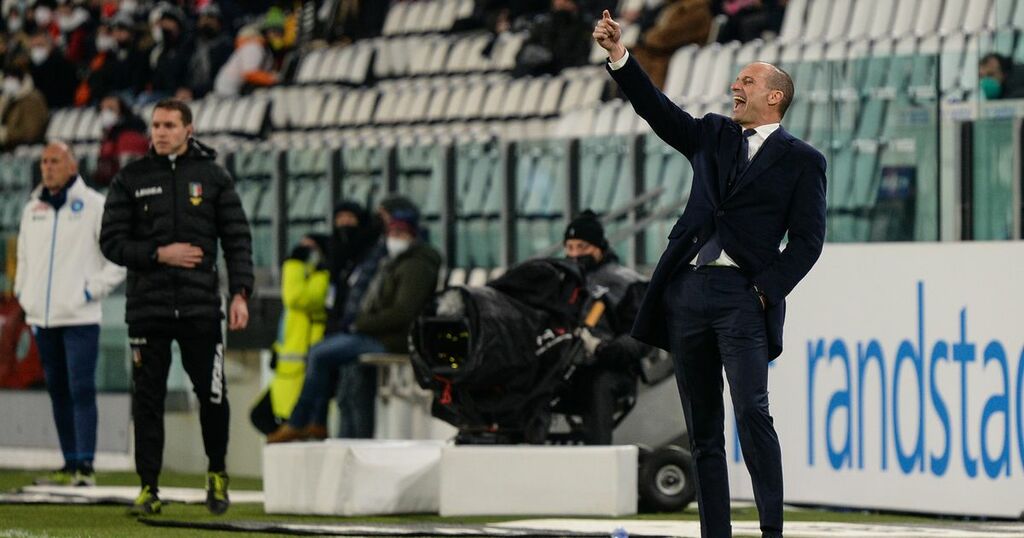 Juventus' dismal season took another turn for the worst after pitch-side cameras picked up a number of players bickering with each other during their most recent league outing at home to Napoli.

Manager Massimiliano Allegri is in danger of losing the dressing room entirely if the players on-pitch antics are anything to go by.

The Turin-based titans have fallen drastically short of their best this term as shown during the 1-1 home draw with Napoli in which a second-half Federico Chiesa equaliser spared them from what would have been their sixth defeat of the season.

The result leaves them fifth in the table and eleven points adrift of league leaders and reigning champions Inter Milan who have lost just once all season.

HAVE YOUR SAY! What is going wrong at Juventus? Comment below

Both goal-scorer Chiesa and Matthijs De Ligt held a heated exchange of words with Adrien Rabiot at separate points throughout the game.

The French midfielder was a source of annoyance and anger for his teammates due to his lack of willingness to cover ground and put in effort defensively.

Allegri attempted to turn the arguments into something positive during his post-match presser, explaining: "It is right that the boys try to encourage each other."

The reality is far bleaker as internal squabbles between players represents how poor Juventus have been this season and provides an insight into the lack of harmony from within the dressing room.

Juventus have scored 28 league goals this term ensuring they have found the net the fewest times of the top nine sides in Serie A.

Cristiano Ronaldo's absence is being sorely felt while those who have been tasked with filling his goal-scoring boots continue to fall spectacularly short.

Juan Cuadrado has found the net just four times this season and his most notable contribution against Napoli was his argument with Chiesa over his half-hearted attempt to thwart an opposition counter-attack.

It would be disingenuous to suggest that Juventus' only struggles come from the top end of the pitch when players in every position are playing well below the level they are capable of.

Rabiot is guilty of allowing Juventus' midfield far too easy to bypass while simultaneously contributing very little in an attacking sense.

His inability to provide the backline with any real protection was the source of his argument with centre-back De Ligt.

The former Ajax defender was seen frantically gesticulating in the direction of Rabiot after Napoli had yet again managed to waltz through the middle of the park to mount another attack.

Chiesa is one of very few Juventus players who can hold his head high off the back of his displays this term.

His willingness to harry defenders at break-neck speed is in stark contrast to the rest of his teammates.