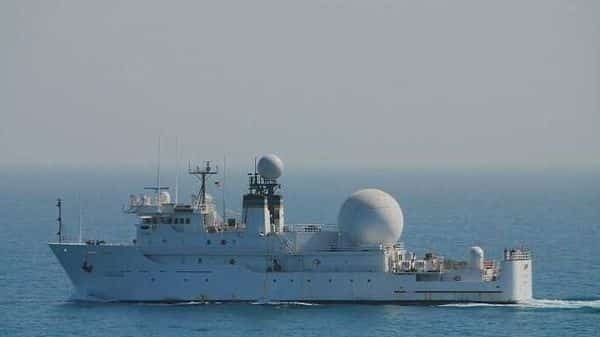 India is all set to launch its first nuclear-missile tracking ship--INS Dhruv today. It will be India's first naval vessel that is capable of tracking nuclear missiles at a long-range, according to a report by the Hindustan Times.  The INS Dhruv could provide early warning of attacks by ballistic missiles launched from Pakistan and China. The satellite and ballistic missile tracking ship was known by the code designation VC-11184. The 10,00 tonnes vessel would play a key role in advancing India's presence in the Indo-Pacific region, the daily added.

The ship, built by the Hindustan Shipyard in collaboration with the DRDO and NTRO, will be commissioned from Visakhapatnam in Andhra Pradesh.

The INS Dhruv is equipped with the DRDO developed state-of-the-art active scanned array radar or AESA that can scan monitor spy satellites watching over India as well as monitor missile tests in the entire region.

INS Dhruv will also be able to map ocean beds for research and detection of enemy submarines. INS Dhruv will also monitor seas to detect spy satellites. With this, the Indian Navy would be able to keep an eye on out in the entire region from the Gulf of Aden to the South China Sea via Malacca, Sunda, Lombok, Ombai, and Wetar straits.

Since both China and Pakistan have nuclear ballistic capabilities and land disputes with India, therefore, the INS Dhruv will help Indian Navy to strategise its military operations better across all three dimensions of naval warfare – sub-surface, surface, and aerial.

With the induction of Dhruv vessel, India will join an elite list of countries that presently consists of only France, the US, the UK, Russia, and China, who possess and operate such ships.