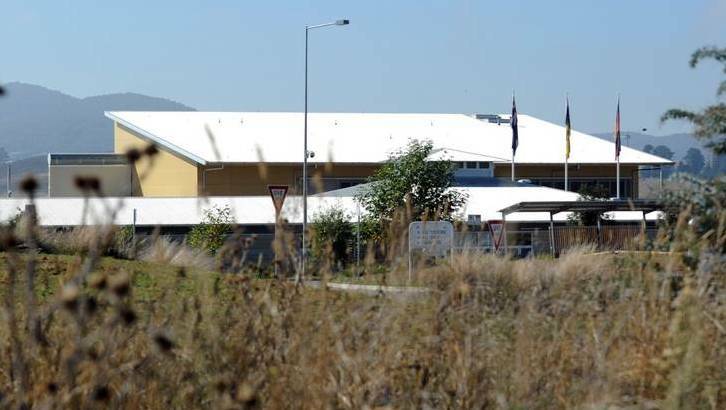 An inmate on remand in Canberra's jail was released without ever being tested for COVID-19, despite having at one point been identified as a close contact of a confirmed case, a court has heard.

Concerns have also been raised about how the Wreck Bay man was almost marooned in Canberra after being brought to the ACT, then released from custody here, with no money.

The man was initially arrested in the Jervis Bay Territory and refused police bail on family violence charges, which he denies, on September 2.

Because the ACT provides courts for that jurisdiction, he was subsequently transported to the capital and remanded in custody at the Alexander Maconochie Centre the next day.

He applied for bail last Thursday and Special Magistrate Jane Campbell indicated it would be granted, but sorting out the logistics of how the man would return home in the face of travel restrictions delayed his release.

Neither police nor ACT Corrective Services were willing to take him back to Wreck Bay.

While the indigenous man remained behind bars, his Aboriginal Legal Service lawyers were notified on Saturday morning that he had been identified as a close contact of an inmate who had tested positive for COVID-19.

He was eventually bailed that afternoon to isolate at the Australian National University, but within hours authorities decided he was not a contact of the positive case and that he could not stay there.

The man was therefore taken by taxi to a caravan park in Eagle Hawk, just outside the ACT, without having been given a coronavirus test.

During a bail variation hearing on Tuesday, the man's lawyer, Lauren Skinner, told the Jervis Bay Court his brother had been able to arrange a travel exemption to pick him up that morning and take him home.

Ms Skinner confirmed to the court that the man had not been tested for COVID-19, adding that there was "confusion over what actually occurred over the weekend".

She indicated that the man would isolate for 14 days upon his return to the small Aboriginal community, which is an almost three-hour drive from the ACT.

Ms Campbell said she was "heartened to hear the news that he is on his way back to Wreck Bay".

But the magistrate said it struck her as "very odd" that authorities had not tested him for COVID-19.

She said she also struggled to understand how a person could go from being a close contact to "being no contact at all".

The magistrate went on to express concern about the apparent lack of support available to help people from the Jervis Bay Territory return home if they were brought to Canberra in custody and then released.

"I find it quite an unjust situation where [the man] is to be released to bail here in the ACT, having been arrested in Jervis Bay with no money and no identification," Ms Campbell said.

The magistrate encouraged police and ACT Corrective Services to consider what arrangements might be put in place for similar cases in the future.

"There appears to have been very little thought that went into the decision to transport our client from Jervis Bay to Canberra in this current climate, and even less consideration of the consequences of that decision," Mr Rutherford said.

"In the end, we were left with a young Aboriginal man unnecessarily and unjustly incarcerated.

"The police and [ACT] Corrective Services need to be held accountable for this."

In response to questions, an ACT Justice and Community Safety Directorate spokesman said all new Alexander Maconochie Centre admissions had been tested for COVID-19 since September 6.

At the time this inmate was admitted on September 3, tests were only being conducted on those who were symptomatic, had visited a known exposure site, or been in contact with a positive case.

The spokesman said that once the positive case in this instance had been identified, the Wreck Bay man was initially treated as a close contact "out of an abundance of caution".

"Upon further investigation and based on advice from ACT Health, the detainee was deemed by ACT Health not to be a close or casual contact," he said.