Injuries to Jason Taumalolo and Kyle Feldt have taken some gloss from North Queensland's stunning 36-6 thumping of Melbourne in front of a sellout crowd in Townsville.

The Cowboys were staring down 12 straight losses to Craig Bellamy's side with their last win coming in the 2015 preliminary final.

But a six tries to one performance on Saturday night marked their sixth win in a row and will have fans contemplating premiership aspirations as they went level on points with the second-placed Storm on the ladder,.

Without stars Ryan Papenhuyzen and Jarome Hughes and playing hooker Harry Grant in the halves, the Storm failed to fire in the second half as North Queensland dominated possession, territory and the intensity of the contest.

Three tries in eight minutes early in the second half blew the Cowboys' 12-6 halftime buffer out to 30-6.

Winger Murray Taulagi boosted his State of Origin selection push with an aerial putdown, fullback Scott Drinkwater found the line off a poor defensive read and young forward Jeremiah Nanai added two more tries to his season tally to be second in the competition with 10.

The Cowboys could easily have won by more but Coen Hess was ruled for a double movement with his crash play and Melbourne winger Xavier Coates miraculously held up Taulagi over the line after a break.

But in their glory came worry, with both co-captain Taumalolo and in-form winger Feldt suffering suspected knee injuries in the first half.

Feldt's left leg was bent back awkwardly in a tackle. he was able to hobble off but must be in serious doubt to contend for the June 8 Origin series opener after he made his debut for Queensland in 2021.

Taumalolo departed the field with a suspected right knee injury.

The pair's injuries end a stellar run with injury for the club after coach Todd Payten was able to name the same starting side for four consecutive rounds.

Taumalolo has led the NRL statistically in post-contact metres in a strong season start after suffering three separate hand injuries in season 2021.

Feldt had scored seven tries in seven NRL appearances in 2022, with four coming in his last three games.

In the first half, a brilliant solo effort by Tom Gilbert got the Cowboys on the board when he gathered the ball from a short goal-line drop out in the 12th minute and broke through the tackle of Marion Seve.

Tom Dearden then found Reece Robson six minutes later from a quick play-the-ball for a try before Felise Kaufusi finally cracked the Cowboys' defensive wall to score in the 32nd minute.

That was Melbourne's only try as North Queensland scored 30 or more points for a fifth consecutive game and Valentine Holmes kicked a perfect six from six conversions. 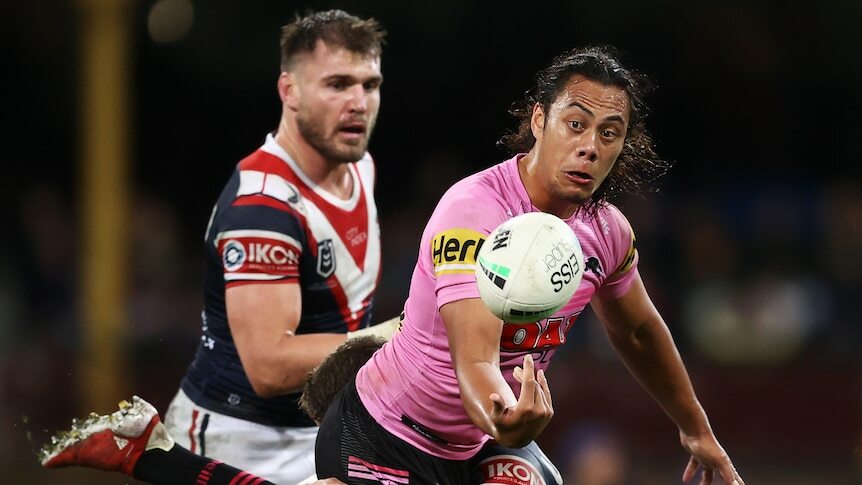 ABC News
One subscription that gives you access to news from hundreds of sites
Cowboys lose Feldt, Taumalolo to injuries