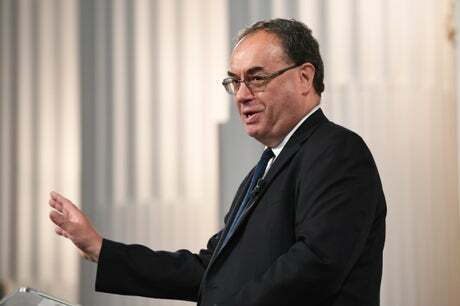 There are rising fears in the City that the Bank of England has lost control of inflation, as it rocketed to the highest for nine years.

As food and petrol prices soared it hit 3.2% for August, up from 2% in July, a “breath-taking” jump.

While the Bank of England insists this is temporary, the pace and the breadth of price increases across most areas of business are piling pressure on governor Andrew Bailey.

The Bank thinks inflation will peak at 4% later this year -- City economists now think 5% more likely. That would be 3 percentage points above the Bank’s 2% target – Bailey will now have to explain himself to Chancellor Rishi Sunak in a formal letter explaining why inflation is so far above target.

Sarah Coles at Hargreaves Lansdown said: “Inflation has taken a breath-taking leap, surging at its fastest rate in over 20 years. It was given a significant shove by the Eat Out to Help Out scheme discounts a year earlier, which will drop out of the figures next month. However, much of this enormous jump is powered by the same alarming imbalance between supply and demand that has seen yawning gaps open up on the supermarket shelves. It spells trouble for shoppers, savers and the broader economy.”

Petrol prices saw the biggest jump since September 2013, reaching 134.6p per litre in August compared with 113.1p a year earlier.

Yaelâ¯Selfin, chief economist at KPMG UK, said: “Higher inflation will inevitably raise questions for the Bank of England on the timing of tightening monetary policy and interest rate hikes to contain inflationary risks further down the line. Recruitment difficulties, cost pressures for businesses, supply chain issues and structural changes post-Covid are all pointing to higher inflation until at least the end of this year.”

The inflation news came as:

** New figures from the Office for National Statistics showed the average UK houses prices swelled by £19,000, or 8%, to £256,000 in the year to July as the property boom outlasts the pandemic and tapering of the stamp duty holiday.

** Character Group, distributor of Peppa Pig, Fireman Sam and Goo Jit Zu toys, saw shares crash 17% as it warned profits will be up to 10% lower than expected despite soaring demand: it blamed an “exponential increases” in freight rates to import products from China.

** AIM-listed model train maker Hornby also said it is “mindful of the potential supply disruption at the ports” as the Christmas rush comes down the tracks.

** Premium mixer maker Fever-Tree said it expects transatlantic freight charges and US storage costs to weigh on profitability for the rest of the year.

** Wagamama and Frankie & Benny’s owner The Restaurant Group is having to raise wages to attract chefs, with CEO Andy Hornby saying he expects skills and supply shortages to be “obvious pressures for the next year or 18 months”..

Kevin Brown at Scottish Friendly said: “Many indicators have been showing for a while that inflation is likely to hit 4%, but we believe it could surpass this and reach over 5% in the near future.”

Interest rates remain at historic lows of 0.1%, but the Bank’s Monetary Policy Committee (MPC) is likely to keep them there for the time being.

Capital Economics said: “The leap in CPI inflation from 2.0% in July to a nine-year high of 3.2% in August (consensus 2.9%, CE 3.1%) is the first step in a rise that may take inflation to 4.5% by November. But as inflation will fall back almost as sharply next year, we don’t think the MPC will raise interest rates until 2023.”