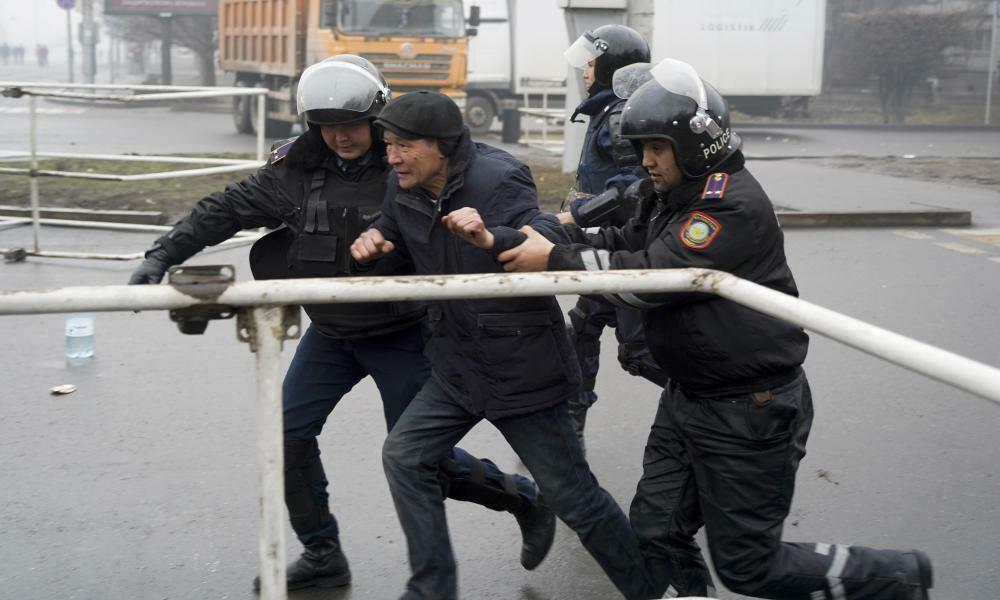 Almaty, the commercial capital of Kazakhstan, is the kind of mirage that oil-rich nations so often produce. It has all the trappings of comfort and consumer excess: swanky shopping malls, luxury car dealerships, high-end hotels.

This is the image of prosperity that the country’s rulers enjoy projecting to the world. For decades, Kazakhs have been encouraged to take out expensive loans to experience their share in the dream: to buy flats, cars and even holidays they can barely afford.

Beyond the limits of Almaty and the capital city, Nur-Sultan, however, the illusion begins to look threadbare. And the causes behind the protests currently gripping the central Asian nation come into focus. Average monthly salaries are less than £450 ($600). Police, doctors, teachers and all kinds of government workers supplement their meagre pay with bribes.

In the distant west of this vast country, which is 11 times the size of the UK with about a quarter of its population, there is the arid Mangystau province, where most of Kazakhstan’s oil reserves lie. It’s where the unrest now gripping the country has its roots.

The government is all about bringing in free-market rules and finally burying the vestiges of the command economy that prevailed when Kazakhstan was a Soviet republic. It was in that spirit that it gradually phased out subsidies for liquid petroleum gas, the fuel that many people in western Kazakhstan use to power their cars. On New Year’s Day, motorists awoke to find it would cost twice as much as the day before to fill their tanks. Demonstrations ensued.

This sort of high-handedness smarts particularly acutely in the west of the country. Why, they wonder, when their regions contribute so much to the country’s wealth, is there so little investment in basic infrastructure? Why do foreign oil workers earn so much more than Kazakhs? Why doesn’t the government listen to the complaints of the people until they come out in numbers on the streets?

This last question is key to understanding what is happening today. Kazakhstan’s government, like so many of its authoritarian counterparts, has chosen to wreck its feedback mechanism. It has parlayed considerable funds into a system known as the “state order”, funding media outlets – even those not belonging to the state – to convey news about the government’s policies with a cheery gloss. The few outlets trying to strike out and produce critical coverage face harassment and legal action.

Some issues are absolutely off-limits. In October, one news outlet, Hola.kz, took the liberty of reporting stories made possible by the Pandora Papers leak relating to the former president, Nursultan Nazarbayev (he stepped aside in 2019, but was until this week believed to still wield considerable sway over the running of the country). The website was immediately blocked. The state claimed that it had not banned the website; it was back online 10 days later. Legislation adopted in 2010 made any coverage of Nazarbayev and his family deemed insulting, defamatory or overly invasive an offence worthy of imprisonment.

This tight control creates frustration and masks evidence of deep social ills. Teen suicide is a huge problem, for instance. In 2008, Kazakhstan became one of the world’s worst places for suicide among 15- to 19-year-olds. Numbers came down in the decade that followed but sprang back up as the Covid-19 pandemic hit.

It took a deadly fire in the city of Nur-Sultan, which killed five children from the same family in February 2019, for the government to refrain from sending in the police to bust up rallies of people demanding more help for low-income households. Even the Kazakh police did not have had the stomach to quell those protests as they normally do with even the smallest gatherings.

One symptom of this malaise is that when protest seasons begin, they quickly broaden in scope. The residents of the western oil town of Zhanaozen came out on 2 January to demand lower fuel prices. Two days later, by the time people in Almaty, around 1,200 miles away, had hit the streets, the slogans had changed. Chants of “shal ket!” – Kazakh for “old man go!”, a reference to Nazarbayev – have become a mainstay in anti-government meetings.

In a grim echo of uprisings in many other authoritarian nations, the exuberance quickly turned sour. Riot police swooped in with teargas and stun grenades to disperse the columns of peaceful demonstrators that marched to Almaty’s Republic Square. The message was clear: mass shows of dissent are not acceptable.

And so a more violent contingent has now stepped into the breach. It is difficult to know what exactly is going on in the country since the government has turned off the internet, and telephones don’t work. Eyewitnesses in Almaty who have managed to get the word out have talked of sustained exchanges of gunfire right in the centre of the city. Authorities claim some gunmen tried to seize a television tower. Dozens of people, including at least 18 law enforcement officers, have been killed. The authorities on Friday described what was unfolding in Almaty as a sophisticated, well-prepared assault against Kazakhstan by an armed terrorist gang numbering in the thousands.

“We’re dealing here with armed and trained bandits, both local and foreign,” the president, Kassym-Jomart Tokayev, declared on TV. “We must destroy them. This will be done soon.” It is a mystery so far who these people are supposed to be.

Tokayev has ominously now turned to raging against the media and civil society. It was the “so-called free media” and outside actors who had abetted and instigated the unrest, he claimed.

The remarks portend more crackdowns and denials about the reality of hardship in Kazakhstan. The old illusion of free-market abundance and popular contentment has been spoiled, so the government will now have to work twice as hard to make the next one more convincing.